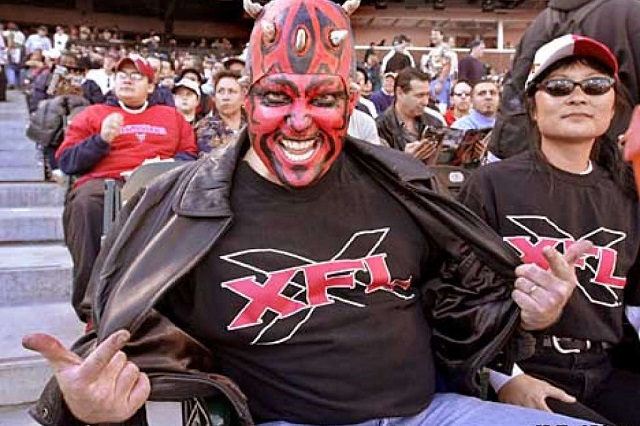 It’s been 15 years since Vince McMahon and the WWE decided to start up their own professional football league. The XFL only lasted one season, but the memories of that failed experiment live on. Apparently, ESPN is developing a 30 For 30 documentary about the league.

ESPN’s Jonathan Coachman appeared on the latest episode of Jim Ross’ podcast, The Ross Report, and revealed the news. You can hear Coachman tell Ross about it at the 34:45 mark of the show.

“They’re going to be doing a 30 For 30 on the XFL,” Coachman said. “I recently sat down for an in-depth interview for this 30 For 30 at ESPN and got to relive some of those moments, some of those nights that we had.” Ross was also a broadcaster on the XFL games, which were broadcast on NBC, TNN (now Spike TV) and UPN (now The CW).

“The XFL was something that we will always have,” Coachman continued, “and nobody will understand what that experience was like in our foray into football on the weekends, and still doing Raw and Smackdown on Mondays and Tuesdays.”

The league debuted on Feb. 3, 2001, a week after the Super Bowl. Vince McMahon stood at midfield and introduced the inaugural game between the New York/New Jersey Hitmen and the Las Vegas Outlaws, which began not with a coin toss and kickoff, but two players racing for the ball at the 50-yard line. Whoever came up with the ball gained the first possession for his team.

Another feature of the XFL was players being allowed to customize the nameplates on the backs of their jerseys, which led to probably the most prevailing memory from the league: Rod Smart’s jersey saying “He Hate Me” on the back.

ESPN is making a 30 for 30 featuring the XFL pic.twitter.com/kIJvWzDMJB

At our sister site, The Comeback, Sean Keeley remembered the 15-year anniversary of the XFL and highlighted several innovations that actually became a part of pro football as we know it today. For as much ridicule as the XFL endured, the league did have some good ideas.

Following Coachman’s revelation, perhaps we’ll get some more news about the documentary in the weeks to come, such as who the director will be, whether it will be a full-length doc to be shown on television or a short shown online, and perhaps how ESPN’s coverage of WWE might factor at all in the development and promotion of the film.