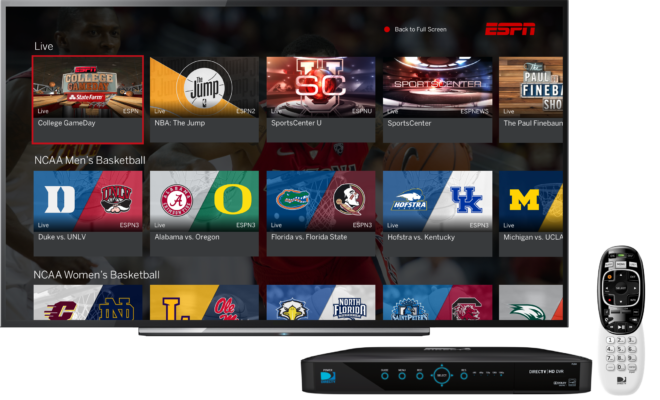 Watching events on ESPN3 or WatchESPN has been a unique experience. There may have been occasions where your favorite college team or a CFL game or perhaps a tennis event has been an ESPN3 exclusive, but the only ways to watch them were on your phone, tablet or computer. As set top devices like Amazon Fire, Apple TV, Chromecast and Roku have come into prominence, you can watch ESPN3 events on your television. But now, ESPN is rolling out a special app for DirecTV subscribers so they don’t have to turn off their receivers and go to another device.

ESPN announced that it has started a nationwide rollout of an ESPN app on its HD receivers allowing subscribers to switch between ESPN live programming and on-demand video. This marks the first time that ESPN has made such an app for pay TV customers. It is currently available in Alabama, Kentucky, North Carolina, Ohio and South Carolina. The app will expand to other states in 2017.

This app will include not just ESPN’s linear networks of ESPN, ESPN2, ESPNews, Longhorn Network and SEC Network, but also the programming on ESPN3, SEC Network Plus and ACC Network Extra. You’ll also have access to on-demand video like highlights, clips and short-form content.

Of course, we have a quote from an ESPN executive regarding the launch of this new app:

“ESPN’s technology team worked closely with DIRECTV to develop a next-generation content experience for customers through their set top box,” said Mike Andrews, ESPN vice president, media engineering. “Fans want to turn on their television and watch great sports content with as little friction as possible. With the ESPN App on the DIRECTV box, they get exactly that – a dynamic user interface, seamless automatic subscriber recognition and all of ESPN’s networks and streaming content presented in one place, all without the need to change television inputs or log in.”

So as ESPN looks to the future, it hopes that an app like this will keep subscribers from turning to other alternatives. It’s likely that we’ll see this app expand to other pay TV providers as the technology improves.