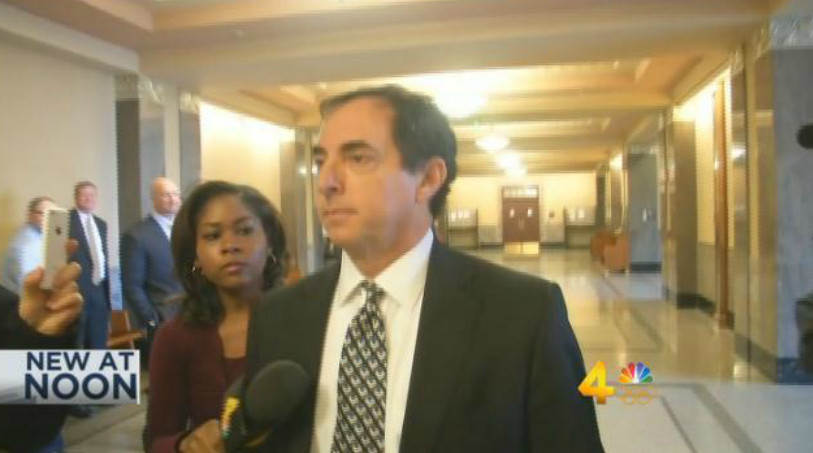 The ownership group of the Nashville Marriott Fox broadcaster Erin Andrews is suing for $75 million took a major PR hit outside the courtroom Wednesday, when West End Hotel Partners representative Neal Peskind admitted to being present at a restaurant table Tuesday night when stalker Michael David Barrett’s peephole video of Andrews undressing (which is at the heart of this trial) was shown.

The circumstances under which it was shown are in dispute; local NBC affiliate WSMV reported that a bartender tweeted Peskind was showing it to his friends, while he said his friends started playing it and he told them to stop. Neither situation looks particularly good for Peskind and the ownership group, though. Here are the two contrasting stories on it:

On Twitter, a bartender at the restaurant told Channel 4 and several other media outlets that it was Peskind who was showing his friends the video.

“He said it was costing him millions so he was going to show it to everyone. His friends were making fun of her and her body,” the bartender wrote on Twitter.

“We had to ask him to stop. It was disgusting and horrifying,” she added.

“Based on what I have heard regarding the incident last night, one of my servers was made uncomfortable by activity at one of our tables. It is my understanding the supervisor on duty asked the customer to stop the behavior. I would expect any of my staff to respond to rude or offensive behavior in my restaurant. We take great pride in providing our guests with a quality experience.”

And his eventual response of “that is incorrect”:

And his eventual statement:

I was at a private dinner meeting with friends. They brought up the allegations and they started viewing the video. I asked them to stop, and while they did so, it was not as quickly as I had hoped. This incident has been blown into something it was not. I would never disrespect Ms. Andrews and what she has been through. This is a very unfortunate situation that should not be a reflection on West End Hotel Partners or to our commitment to the issues in this case surrounding what happened to her. I sincerely apologize for my participation in what happened.

And here’s Peskind’s attorney’s statement, which suggests the video wasn’t on Peskind’s phone, but on his friend’s phone:

Meanwhile, the bartender in question has deleted the initial tweet, but said “I saw something I thought was wrong. I said something bc I thought it was the right thing I’m not planning on commenting further right now,” and said “I’m not interested in perpetuating this media frenzy.”

Peskind has already appeared in this trial, testifying Monday that his ownership group hired an independent contractor (Windsor Capital Group, a hotel management company) to oversee the day-to-day operations of the Nashville Marriott, and thus West End was not responsible for any operational decisions by Windsor. Andrews is claiming that the hotel was negligent in letting Barrett stay next to her without informing her; Peskind’s testimony would seem like an attempt to shift responsibility for that decision (and liability, if any) from West End Partners to Windsor Capital Group.

As WSMV’s story says, these allegations about Peskind’s dinner and the playing of the Andrews video at it aren’t supposed to impact the trial, especially as jurors are supposed to avoid trial coverage in the media. However, it’s worth noting that TMZ reported that the jury in this case is not sequestered, so even though they’ve likely been told to avoid media coverage, that may prove difficult. We’ll see if this has any impact on the case. At the very least, it doesn’t make Peskind and the hotel ownership group look good.