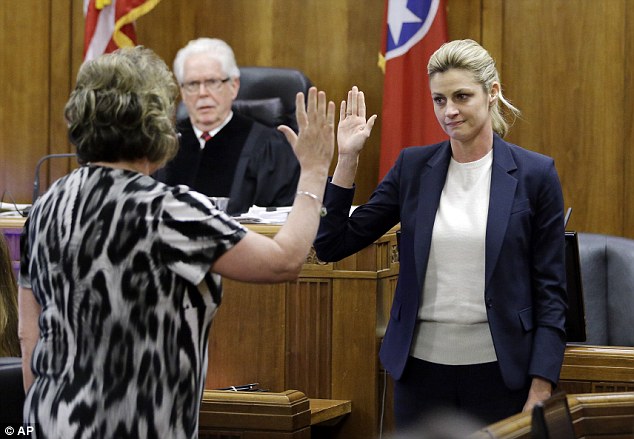 Fox broadcaster Erin Andrews’ $75 million lawsuit against stalker Michael David Barrett and the Nashville Marriott continued Monday, with Barrett’s pre-recorded testimony, testimony from Andrews’ mother Paula, and testimony from Andrews herself. It was something Andrews herself said that was particularly revelatory, though; Entertainment Tonight Online executive editor Shana Naomi Krochmal tweeted that Andrews testified she was told by ESPN to do an interview about the video:

Erin Andrews testified ESPN wouldn't let her back on air until she did a sit-down interview to clarify leaked vid wasn't a publicity stunt.

The Daily Mail has more on that claim:

The return was a difficult one despite her love of the sport, and she said she cried in her shower before he first appearance back on ESPN.

It was ESPN who also told Andrews she needed to do an interview about the video’s release she testified on the stand.

Andrews said she decided to go with Oprah Winfrey because she could have the entire hour of the program to tell her story.

She said that Winfrey being a victim herself also played a big part in deciding who to sit down with for the intimate interview.

It was a difficult interview for Andrews, who broke out in a rash which she said in court she still suffers from on occasion – including during the trial.

We don’t have direct quotes of what Andrews specifically said about ESPN, but these paraphrases are certainly troubling. Telling her she had to go on TV and talk about a nude video of herself doesn’t seem like the most caring management philosophy, and it seems odd that they would focus on trying to disprove this was a publicity stunt. We don’t have ESPN’s side of the story, though. However, it seems that the thought of it being an Andrews-orchestrated publicity stunt was widespread; she also testified that the FBI agents she spoke to were initially skeptical that she wasn’t involved with the video:

Andrews broke down in tears soon after taking the stand while speaking about the horrific incident, saying that for months after the video was put online by Michael David Barrett many people thought it was all just a ‘publicity stunt.’

‘That ripped me apart,’ said Andrews.

She also had to fly with her father to Los Angeles during the FBI investigation to watch the video with agents who needed to be certain it was not a publicity stunt.

‘They wanted to look me in the eye and see if I had anything to do with this,’ said Andrews, who revealed that she vomited while watching the video.

For his part, Barrett testified that he recorded the video to try to make money, attempted to sell it to TMZ, and posted it online without compensation after TMZ passed. He also recorded other women:

Barrett’s testimony came first Monday and was presented via a recorded deposition that lasted over two and a half hours.

He said his intent was not to embarrass or humiliate the sportscaster, and chose Andrews because she was trending on Yahoo, which is how he figured out she was a star. …

He initially tried to sell the secretly-recorded video to TMZ and a French website but said he was concerned after TMZ passed on the video that they would give it to authorities and he would get in trouble.

Barrett said once he realized he couldn’t make any money off the video, he began posting it on various sites. He said he learned the video had gone viral after his Daily Motion account exploded with views.

During his deposition, Barrett also revealed after recording Andrews he videoed 10 other women through peepholes at various hotels nationwide. He said he didn’t know any of the women and he chose them at random.

He was arrested at the O’Hare International Airport in Chicago when he returned from a business trip in October 2009 and was ultimately found guilty in the case and sentenced to two and a half years in federal prison.

A key point in this case may be whether the Nashville Marriott, the Marriott chain or both should have notified Andrews that Barrett had requested a room next to hers. Marriott International’s Renne Buonicontri testified Thursday that Barrett obtained the room next to Andrews in Nashville via a request through the company’s 1-800 number, and that his request wasn’t passed on to the Nashville Marriott. Andrews testified Monday that she’s angry the Marriott never let her know about his request:

“I was so angry. This could’ve been stopped. The Nashville Marriott could’ve just called me,” she explained. “And I’m just so angry. I’m so mad.”

The trial continues Tuesday, and is expected to run through most of the rest of the week. Andrews’ comments about ESPN and their role in creating that Oprah interview may cause a stir well outside of this trial, though.