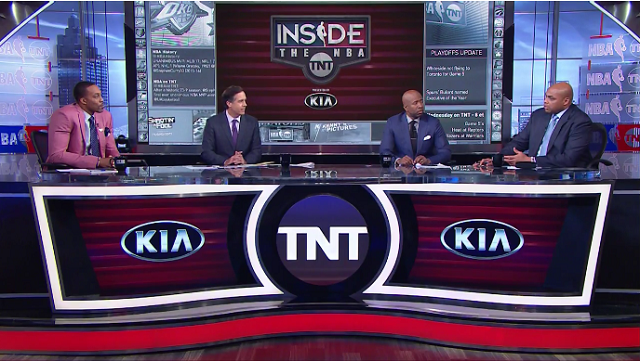 Houston Rockets center Dwight Howard filled in for Shaquille O’Neal on TNT’s Inside the NBA Tuesday night, and probably wouldn’t have done so had he known it would basically turn into an intervention led by Charles Barkley.

It was compelling, yet awkward television, as even current NBA players expressed:

Barkley — as always — was very straight-up with Howard, asking the star center, “Why do you think people don’t like you?”, and saying that he thinks Howard is “disinterested” playing with James Harden in Houston.

Dwight Howard on Inside the NBA addressing criticism he has faced during his career https://t.co/96hzHdvKri — TurnerSportsPR (@TurnerSportsPR) May 11, 2016

To Howard’s credit — after being put in a tough spot with being asked these questions that he surely wasn’t expecting on live television — he was in-depth and open with his answers, and came across as a guy that really does care about winning:

People see me and they’ve seen the success I’ve had in Orlando, and they see now, and they’re probably like, “What’s the difference?” I think I was very likable in Orlando, and the way that situation ended, I think people felt as though I’m just this bad guy. (That) I’m all about myself, I’m a diva, that I’m stuck on being Dwight Howard this famous basketball player. So a lot of people say, “You know what? We don’t like this guy.” You know, and I hear that a lot.

And you know what, it really hurts me because my heart and my attitude towards the game has always been the same. And my drive has always been there. Because I never forget the day I came in here and you (Charles Barkley) told me that I wasn’t going to be good in the NBA. And I never forget the day that Magic Johnson said I wasn’t going to make it to the NBA when I was in the 10th grade. And that stuff drives me everyday, to be one of the greatest players to ever play the game. So, that part, to hear people say that, it pisses me off because that’s not who I am. You know, I’ve never been a bad person, and it’s not like I want people to like me, because I know people are not going to always like me, but if you get to know me, I’m laid back; I love to have fun.

And the second part, disinterested? I’m always interested in winning. But you know, as a big (a center), sometimes you want to feel a part of what’s going on. You know, if I could bring the ball up the court, shoot threes and go between the legs, do all that stuff, that would be great. But I have to rely on my teammates at certain aspects to get the ball.

Now, there’s been times I’ve been upset where I’ve been upset, and I’ve taken myself out of games in situations. And that’s on me. I have to grow and be a better player at that. I’m always interested in the game. I’ve had the problem with smiling too much — people say I smile too much — so when I’m not smiling and doing all that stuff it looks like I’m not interested in the game. So it’s like a thin line, where I’m like “Man, do I not smile? Or do I smile and have fun?” And so that’s always been a struggle for me personally.

The whole “intervention” continued for a bit after this, with Barkley only sounding more like a high school counselor as things went on.

Like, “I’m gonna give you this little bit of advice…”

And as you see in that last clip, Matt Winer (filling in for Ernie Johnson) then jumped in, pressing Howard on whether or not he’s going to opt-out of his contract with the Houston Rockets this summer. It had to be a very uncomfortable night for Howard… and he even heard from Shaq on Twitter:

@DwightHoward hey dude ,you bet not be fartin in my seat. You kno u need to be over in the CHARLES (NO RING BARKLEY )section #hardenshoot