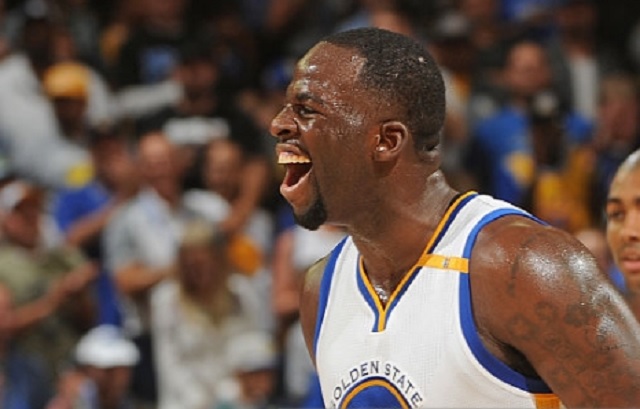 There may be no more tiresome retort between athletes and media than trying to diminish the opinion of a reporter or columnist because he or she either didn’t play the game being covered (especially at its highest levels). Being a detached observer can often result in clearer thinking and more objective views of particular situations. It’s kind of the point.

So when Golden State Warriors star Draymond Green ripped ESPN NFL reporter Adam Schefter following the Broncos-Chiefs Sunday night game for his analysis because he didn’t “actually play the game,” it compelled some eye-rolling from those weary of that knee-jerk reaction. But let’s try to fill in some context here with the play that Green and Schefter argued about: Bennie Fowler’s touchdown for Denver late in the game.

Nothing wrong with that play, right? Fowler got open, caught the pass from Trevor Siemian and raced to the end zone, giving the Broncos a seemingly solid eight-point lead.

But there was a dissenting sentiment that said Fowler would have been smarter to take a knee before scoring, which would have allowed Denver to run time off the clock. Either Kansas City wouldn’t have had enough time to eventually score the game-tying touchdown and force overtime, or they never would’ve gotten the ball back in regulation. Count Schefter on that side.

If Broncos WR Bennie Fowler had just taken a knee near the end zone instead of going into the end zone, there's no OT and this game is over.

Green took issue with that assertion, saying no athlete would have made that kind of decision in the moment.

In today's doing too much News… no way any athlete would have ever said this…. wow https://t.co/xw1QFmbTgh

Perhaps Green is sticking up for his fellow Michigan State Spartan in Fowler (and picking an argument with a Michigan alum in Schefter), but he does raise an interesting point that seems to go beyond the usual “you didn’t play the game” dismissal. This isn’t about whether or not Schefter has the physical ability or talent to play in college or the NFL. It may not even be about having a different awareness of game situations when you compete at those levels.

At the risk of speaking for Green, what he may have been referring to is being in the moment as a competitive athlete and letting instinct take over. Fowler’s impulse is to catch the ball and make a play. In this situation, he had an opportunity to make a big play. With all of the open field in front of him and no Chiefs defenders in sight, his instinct was to score a touchdown. Isn’t that ultimately the goal of any skill position player on offense, outside of executing a play properly and getting a first down?

Yes, the rational decision may have been for Fowler to go down after making the catch. In retrospect (especially with the Chiefs coming back to win in overtime), maybe it would have been ideal for him to fall to the ground after crossing the Chiefs’ 40-yard-line. That would have given the Broncos enough space to run some plays, perhaps drive toward a field goal, all while taking time off the clock. But in the moment, that goes against every instinct Fowler has developed in all his years of playing football.

Schefter drew the comparison to Philadelphia Eagles running back Brian Westbrook going down at the one-yard line late in a 2007 game versus the Dallas Cowboys. But there were two minutes remaining in that situation. After Westbrook slid to the turf, the clock would go to the two-minute warning and the Eagles were able to run out the clock by kneeling the ball down three times. The Broncos had three minutes remaining Sunday night. Without getting a first down, there’s a strong chance they would have had to give the ball back to Kansas City.

Should a Broncos coach or teammate have apprised the offense of such a possibility, as Jon Runyan did for Westbrook nine years ago? Well, maybe. But it wasn’t a given that Fowler would get the ball, as it was for Westbrook. Also, Denver began the play on its own 24-yard line. Moving the ball out of their own territory, lest they give the Chiefs strong field position, was surely a priority, in addition to clock management. Taking a knee and running the clock out wasn’t as sure a decision as it was for the Eagles nine years earlier.

The point is that all of those factors likely weren’t a part of Fowler’s thought process when he caught that pass. Green taking exception with Schefter’s argument isn’t a matter of whether or not the reporter played NFL football. It’s about the difference between making a decision in a competitive situation as it’s happening versus watching from a press box or living room, along with the hindsight that develops in the seconds and minutes after a play has occurred. In Fowler’s case, that may have been a huge disparity.