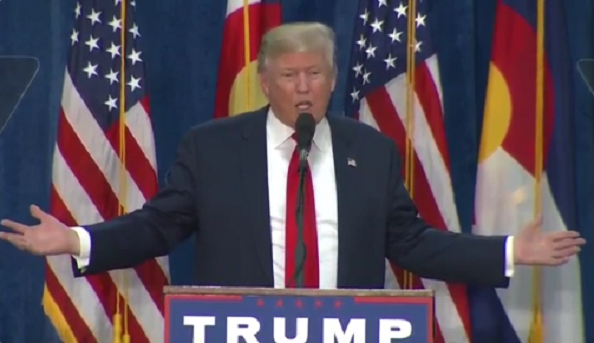 The NFL has had ties in back-to-back weeks. Boring! The NFL has seen its television ratings drop a lot during the 2016 regular season. Bad! And Donald Trump thinks he’s a huge reason the ratings are down. What?

“The NFL is way down in their ratings. And you know why? Two reasons. Number one is this politics they’re finding is a much rougher game than football and more exciting, and this — honestly we’ve taken a lot of people away from the NFL. And the other reason is [Colin] Kaepernick,” Trump said.

Trump made these statements during a rally in Colorado on Sunday. His comments came after talking to his audience about how he was curious how many people would attend the rally with the Denver Broncos playing at the same time. Here are his full thoughts on the matter and what led up to them:

NFL ratings are way down due to Colin Kaepernick: Donald Trump https://t.co/uprGWzrFVr

As Pro Football Talk points out, the election probably isn’t the main reason why NFL ratings are down. Why’s that? Well, college football ratings haven’t been affected. Then again, college players have a little more freedom to celebrate and their schools can actually post GIFs and videos of big plays.

But back to Trump’s comments. While it’s unlikely the election is the reason why ratings are down across the NFL, the protests are a different story. It’s easy to tell when specific election coverage (i.e. rallies and debates) is airing at the same time as games and more people are watching election programming compared to games. At the same time, it’s not easy to discern if fans are switching off of NFL games due to the protests.

It’ll be easy to tell if Trump’s thoughts are right in two weeks when the election is finally over. The NFL just hopes by then its streak of consecutive weeks with a tie game is in the rear-view mirror.