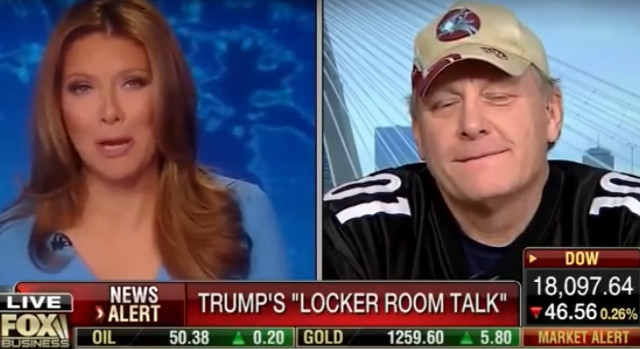 Since being fired by ESPN in April, there’s been plenty of discussion about other sports landing spots for Curt Schilling, but none of it’s come to pass. Instead, Schilling has started a radio show focused mostly on politics, contemplated a Senate run and made a variety of political appearances. One of those latest political appearances has drawn so much criticism that, added to the rest of Schilling’s behavior at ESPN and post-ESPN, makes it seem highly unlikely he’ll work in the sports world again. Here’s what Schilling said on Fox Business Network Thursday, which drew strong criticism from host Trish Regan:

A transcription, via Business Insider:

Schilling appeared on the show and was asked about Trump’s “locker room talk” comments following the surfacing of a 2005 video showing him making lewd remarks about women.

Schilling redirected the conversation to a more recent video. It showed Trump in 1992 remarking on a young girl’s beauty, then saying, “I am going to be dating her in 10 years. Can you believe it?” Trump would have been 46 years old at the time of the video.

“The conversation you’re having about the things he said about the 10-year-old girl, to me, is at the very heart of why this is a problem,” Schilling said, referring to the young girl in the video.

Regan said, “You’re alone on this one.”

Schilling again defended his point, saying that women often compliment his son’s looks. He said that critics were unfairly insinuating pedophilia or molestation over Trump’s comments.

Regan replied, “I don’t look at a young boy and say in 10 years I’m going to date him. I just don’t. I think that would be pretty sad if I did.”

She then asked Schilling if he looks at young girls and says he’s going to date them in 10 years.

“No, no. I have a daughter, my daughter has friends. I’ve seen my daughter’s friends, I’m a man. ‘Wow, she’s a beautiful young lady.’ I don’t immediately jump to molesting her. But that’s where the left has gotten…” Schilling trailed off.

We’ve seen plenty of controversial comments either made (ESPN employs some of the biggest racists in sports, Hillary Clinton should be buried under a jail, “A man is a man no matter what they call themselves“) or shared (memes comparing Muslim extremists to Nazis or mocking transgender people) by Schilling, but the particular comments here drew condemnation from an even wider swathe of the public than normal. When added to his lengthy list of other problematic actions, it seems hard to imagine that he’ll hold a prominent sports job again.

Of course, Schilling was already seen as toxic by many sports media outlets and even some right-wing political outlets; he’s one of the few people ever publicly fired by ESPN mid-contract, Fox Sports turned down his inquiry about working there, and a discussed move to Sirius XM’s Patriot Channel didn’t happen. So, his prominence in the  media landscape might have been over long before this. However, Schilling just seems to keep making himself look worse and offending more and more people with every comment he makes, making him more and more toxic to the sports world in the process. It’s remarkable that someone once paid millions annually as one of ESPN’s most prominent baseball analysts has fallen this far in just six months, but Schilling seems willing to just keep digging.