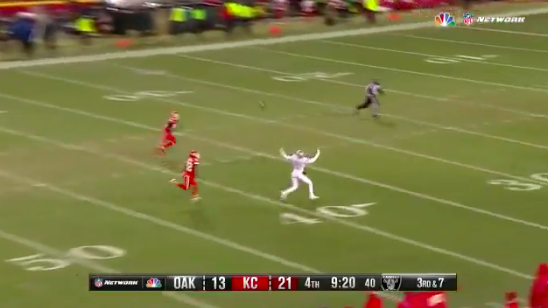 The Kansas City Chiefs picked up a huge AFC West win over the Oakland Raiders on Thursday Night Football this week. But there’s one play from the fourth quarter of the 21-13 victory that is drawing some extra scrutiny this morning in the aftermath of the game.

Could the game have been changed because of a Derek Carr pass hitting one of the wires for the SpiderCam that hangs over the field of play? There are Raiders fans that definitely believe that’s the case.

The play happened with just under 10 minutes to go in the 4th quarter on 3rd and 7 with the Raiders inside their own 30 yard line. Derek Carr steps up in the pocket and throws deep downfield for Amari Cooper, who has a step on the rest of the Chiefs secondary. It looks like a surefire touchdown until the play weirdly falls apart and Cooper just sort of stumbles with his hands up in the air.

The bizarre nature of the play and Cooper acting like he had just seen a ghost instead of making what appeared to be an easy catch definitely drew everyone’s attention:

As fans examined the play, the SpiderCam theory has gained more traction with several videos on social media and even its own Reddit thread. Others picked up on it as well.

After watching replays on highlights for @RAIDERS vs @Chiefs – I am convinced that the pass from Carr to Cooper hit NBC's spider cam wire.

The intrigue is only bolstered by Cooper’s postgame remarks about the play. After the game, Cooper said the ball moved on him at the last moment and this ESPN.com recap references the theories about whether or not SpiderCam played a role in the incompletion:

Yet, Carr was off and badly out of sync with his receivers all night, perhaps no more so than in the fourth quarter, when he had Amari Cooper wide open on a scramble drill, but Cooper took a bad angle and simply missed the ball.

Cooper said the ball moved on him at the last second and several fans have said that replays show the ball hitting NBC’s camera wire that goes over the field.

“That’s why it looked like I might have stumbled,” said Cooper, who had five catches for 29 yards. “I was running in the right direction and it kind of moved inside at the last minute and I didn’t have time to get it.”

If the pass did indeed hit the wire and one of the officials, coaches, or players saw it, the down should have been replayed. Here’s the relevant rule from the NFL rulebook for when a dead ball should be declared:

But was that actually the case? Did the Raiders lose a touchdown because of the pass hitting a wire?

You can see how the basic SkyCam/SpiderCam is set up here with the connecting wires holding the camera up over the field of play. Even though the camera would be safely behind the play behind the quarterback, the camera is held up by anchor points and wires connecting to four corners of the stadium. 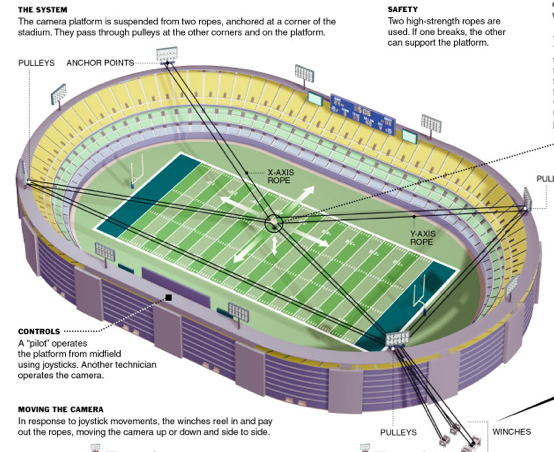 This schematic is closer to the play in question and where the wires *could* have been, with the Raiders backed up in their own territory. It’s impossible to know without a blueprint from NBC where exactly they would be attached at Arrowhead Stadium. 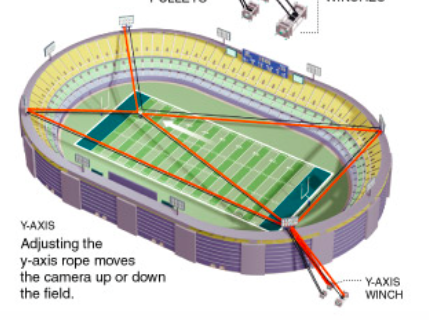 Here’s where conjecture and speculation ultimately come into play because it’s impossible to say for sure what happened just based on the video evidence. Those wires are so tiny that you couldn’t possibly see them from the game footage and the replays. If the ball did hit the wire, it likely would have happened out of frame as the pass goes up looking like a spiral and comes down looking like a wounded duck. Ironically enough, NBC showed a replay from the SpiderCam that shows the ball falling down out of the sky. 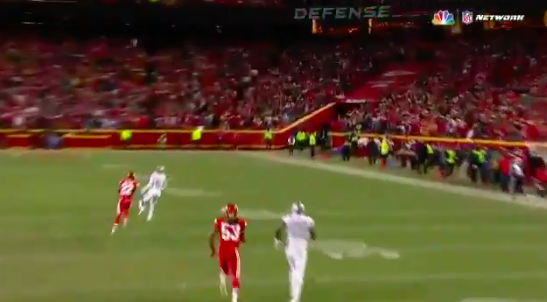 Judging by that angle, where the camera is, and where the ball falls out of the air, the SpiderCam wire would have to go more vertically up and down the field as opposed to diagonally out to the corners of the stadium. At least that’s what memories of my 8th grade geometry class is telling me.

So did this pass really get deflected by a SpiderCam wire? Are the Raiders cursed by the Holy Roller to lose games from here till the end of time by tuck rules and camera wires? Here’s where we default to Occam’s Razor.

In order to believe the SpiderCam theory, we have to assume that Carr’s pass flew to a point with the perfect height and place on the field to hit a wire that would be just centimeters thick. We also have to assume that the wires would be consistently over the center of the field, providing a risk to almost every offensive play that something like this could happen. We also have to believe that the officials, players, and coaches on the field watching the play all missed it in real-time with the best possible view.

Conversely, we could assume that the trajectory of the ball was affected by a late gust of wind or that Carr’s deep throw was affected by the cold weather and the dislocated pinkie finger on his throwing hand. In total, Carr was only 17/41 last night throwing the football at Arrowhead.

Is it possible that this pass hit an NBC SpiderCam wire? Yes, of course it’s possible. But is that the most likely explanation for the play? That’s much tougher to say.

UPDATE: NBC says the pass definitively did not hit the wire:

“The overhead camera is positioned behind the line of scrimmage, so the cables would not be in play.”