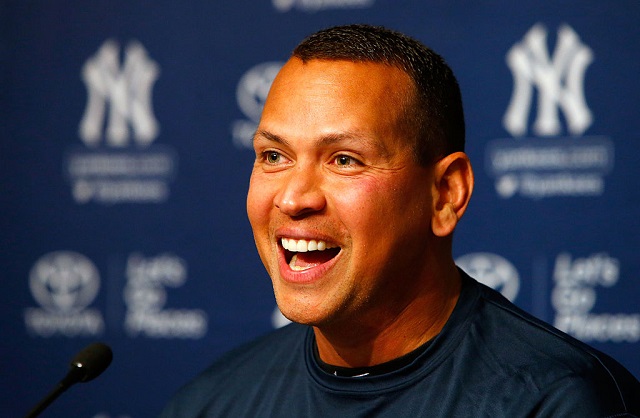 For the second consecutive MLB postseason, viewers and critics are enjoying Alex Rodriguez’s studio work as an analyst for Fox Sports. He’s had entertaining interplay with fellow commentators Pete Rose and Frank Thomas, and has also provided insight on the craft of hitting to viewers presumably seeking more than hot takes and fast quips serving up shallow analysis.

Now that A-Rod is retired from baseball after the New York Yankees let him go quietly to a position of special advisor and instructor with the team, he seemingly has time to devote himself full-time to the TV work that he’s proven to be very good at thus far. Don’t assume that Rodriguez is ready to become a full-time TV face, however. Even if such an option is on the table for him, he claims he hasn’t really considered the possibility.

“I haven’t given it any more thought past this year,” he told reporters, including Newsday‘s Neil Best. “Literally, as a 10-year-old boy, I had dreams of always being a major league baseball player and kind of trying out my career in business. Those are my dreams. I never thought about broadcasting.”

Though A-Rod hasn’t typically been someone you could take at his word, especially in regards to using performance-enhancing substances, it’s not entirely difficult to believe him here. During the past three years, Rodriguez has been so consumed with fighting MLB suspending him for his involvement in the Biogenesis scandal and trying to maintain a roster spot with the Yankees that he likely hadn’t given much thought to what he might do once his playing days end.

A-Rod presumably had plenty of time to contemplate the next stage of his professional life while Yankees manager Joe Girardi frequently chose not to play him during the past season, maybe he wasn’t quite ready to let go. Even after his retirement became official, there were many in the baseball media who stuck to their belief that A-Rod would try to play again next season.

According to Best, one of the things that has most impressed colleagues and executives at Fox Sports about Rodriguez is his preparation and ambition to be good on TV. But maybe that’s not work he wants to put in full-time after so recently stepping away from the grind of playing 162 games, in addition to spring training and the postseason.

“It’s not a parachute in. He’s invested,” Fox Sports vice president of production Bardia Shah-Rais told Sports Illustrated‘s Richard Deitsch. “If we have a noon meeting, he’s there at 11:30 a.m. He’s emailing story ideas in the morning. He wants research. He’s almost all-in to the point where it’s annoying. I tell him sometimes to trust himself and not worry so much about all his notes. Alex is probably over-prepared and Pete makes fun of the fact that Alex has a binder of notes where Pete just comes in and says whatever.”

Much like asking an athlete about the next season right after he’s finished the current one, perhaps it’s not quite the right time for Rodriguez to think about expanding his commitment to TV. Maybe he actually is interested in his new position with the Yankees which, frankly, sounds as if it will allow for quite a bit of time off when he’s not tutoring minor leaguers in Tampa or doing whatever job Hal Steinbrenner might ask of him as a special advisor.

But Fox Sports has a good thing with the combination of A-Rod, Rose and Thomas, and the network knows it. After giving Rodriguez some time to think about his next move once the postseason ends, it sure seems like they’d want more of this team on TV next year.