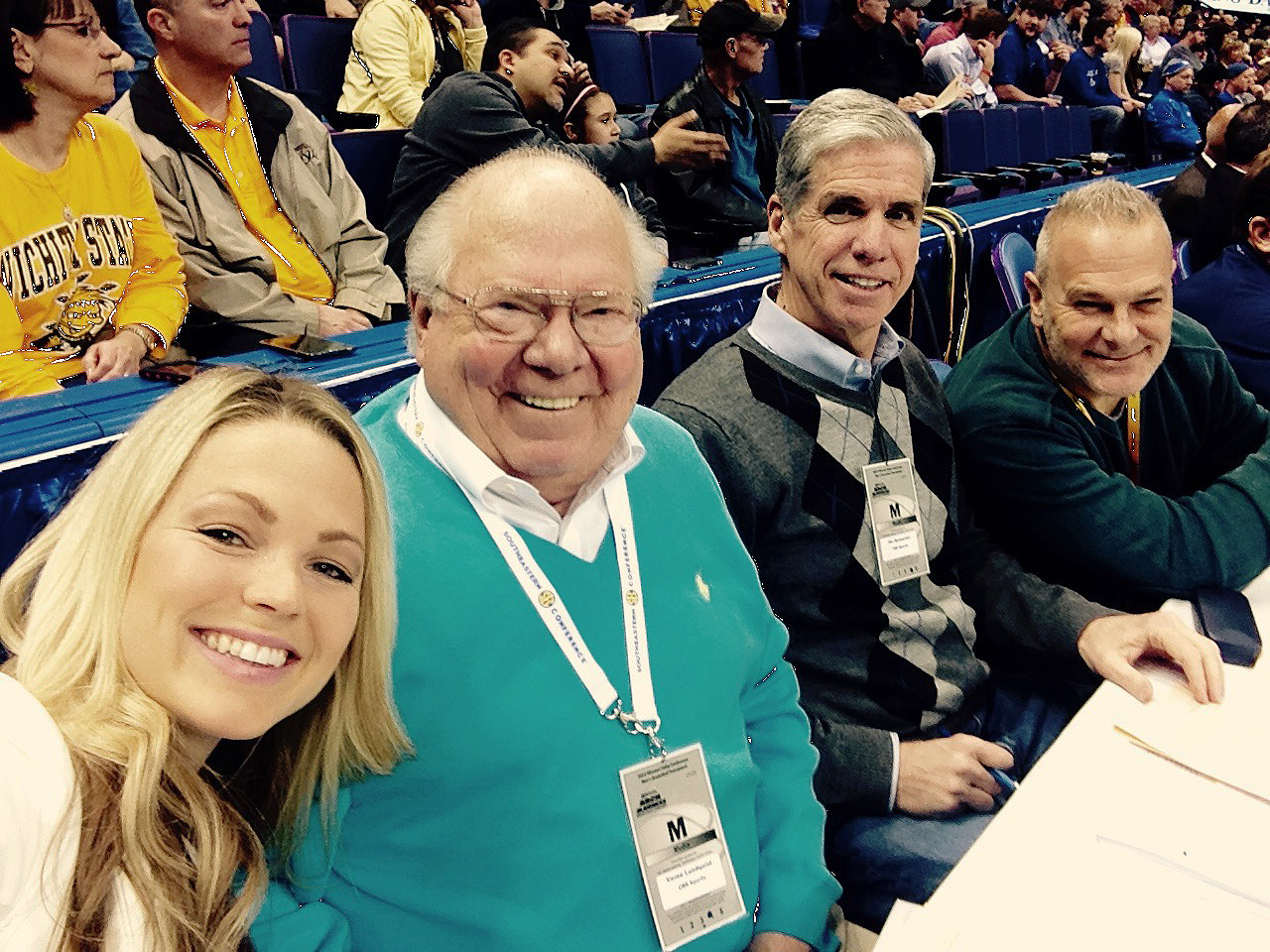 Lundquist, 75, and LaForce, 27, worked the first and second rounds of the 2014 NCAA Tournament on a Thursday and Saturday in Buffalo along with Bill Raftery, and were absolutely wiped after the long weekend of games. But that didn’t stop them from pulling an all-nighter together.

The three broadcasters and crew members had a meeting room set up and food was brought in. Lundquist had a 6 a.m. flight back home to Denver through Chicago and wanted to get some sleep before leaving Buffalo.

“Raftery is a dangerous man to be with in any circumstance,” Lundquist told Awful Announcing, “but after a doubleheader— watch out.”

Everyone hung out late into the night and everyone was having a really good time, and LaForce was having a great first few days with what would turn out to be her broadcasting partner ever since. There was only one problem, however.

LaForce’s dad and sister drove over from Cleveland for the weekend, and her father was worried when she wasn’t back at her room.

“My dad was in the hotel room, and he called at 4 a.m. and he said ‘are you okay?’” LaForce told Awful Announcing. ”And I said yes, I’m up with Verne. We’re hanging out, we’re just having a great time celebrating this day of games. We’re waiting for him to take off for his flight. Of course my dad didn’t buy that.”

Both Lundquist and LaForce wanted at some point over that night to go back and get some sleep, but they were too busy laying the groundwork for what they described as a really close friendship.

“There was one point where I tried to stand up and leave to my room because I was tired,” LaForce said. “And he had remembered I had convinced him to stay, so he stood right up out of his chair and pointed at me and said ‘you sit back down. If I’m staying up, you’re staying up.’ So we were in it together from that point on.”

LaForce was so impressed by the way Lundquist embraced and encouraged her right away as a journalist, and gave her the confidence to quickly rise through the ranks at CBS.

“Obviously I had watched him multiple times, and not just on ‘Happy Gilmore’ but in calling sports,” she said while Lundquist laughed in the background. The pair had just finished watching teams practice in Anaheim as they prepared to call the Sweet 16 and Elite Eight for the West Region.

“And I was just so impressed that he was that lovable, kind, intelligent person I remember watching on TV,” LaForce said. “And you hope that people are like that in person, but you never really know. And he just was above and beyond.”

In addition to calling college basketball with Lundquist and Jim Spanarkel— after Raftery moved up to the top crew with Jim Nantz and Grant Hill— LaForce has spent the last two full seasons with Lundquist and Gary Danielson on the SEC on CBS, taking over after Tracy Wolfson was promoted to Nantz’s NFL on CBS team.

So after spending the last two-plus years together crisscrossing the country together calling games, the two have grown close.

“It’s not a grandfather-granddaughter relationship, not at all. It’s more like equals,” Lundquist said. “And despite the almost five-decade difference in age, Allie helps keep me young just in spirit and approach and energy.”

LaForce replied that she and Lundquist were far from equals, but is humbled by that kind of praise.

“Just hearing him say that is quite exceptional and something I never thought I would hear,” she said. 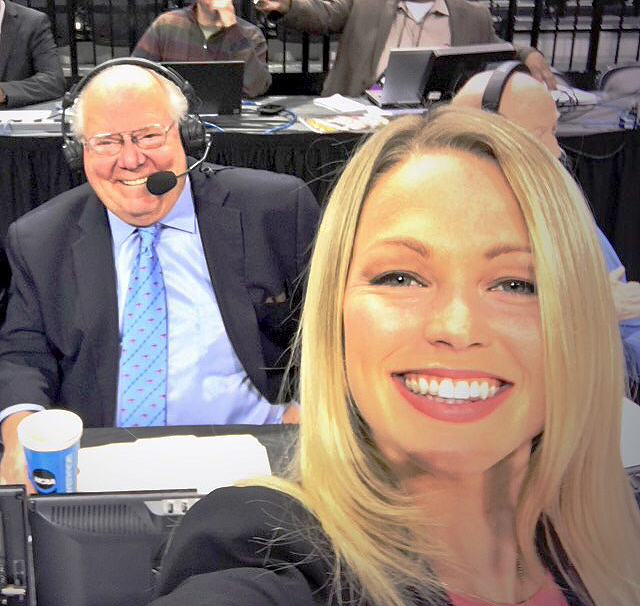 As close friends would, LaForce is helping Lundquist keep up with the times technologically, teaching him how to text and FaceTime.

“I haven’t learned how to forward photos yet, but that’s coming,” Lundquist said.

Now while on the road, Lundquist FaceTimes with his wife Nancy and LaForce catches up with her husband Joe Smith, a relief pitcher for the Los Angeles Angels. Their spouses have become friendly with each other, too.

“He knows my husband really well now thanks to FaceTime,” LaForce said.

“Now I’ve seen him sideways and upside-down,” replied Lundquist, as the pair shared a laugh.

The way they get along so easily outside of broadcasts translates well when CBS goes on the air with college hoops or an SEC game.

“Verne is unique in that he has a very unselfish approach to the broadcast,” LaForce said.

LaForce appreciates that Lundquist prefers a collaborative approach with the rest of his crew, what the broadcast veteran of over 50 years called a community effort.

“I’ve worked with a lot of groups where the play-by-play man wants to make that decision on his own and wants to take the bulk of the information,” LaForce said. “But Verne is never that way.”

Lundquist appreciates how well LaForce gets along with coaches that she works with, not an easy task in the broadcasting business.

“It’s really important for that role, and you see it in basketball, the respect that the coaches have for her,” Lundquist said. “And you also see it in the SEC. And in my view, that’s the tougher task. That manifests itself in the on-air product every week.”

Lundquist is highly respected by coaches and fans alike, and remains humble while being mobbed by fans, especially during college football season.

“When he steps out of his car in the SEC, just to walk to the elevator to the booth, there are swarms of people taking photos and asking for autographs and yelling out ‘Uncle Verne,’” LaForce said. “And he just smiles and signs every autograph and takes every photo and embraces it with a warm heart. And he always says, ‘I feel a responsibility to the fan.’”

Lundquist, who is still dragging his feet on getting a Twitter account, said that unless fans are obnoxious towards him, he’ll always respond to them with kindness.

“I just think, what does it hurt to be nice? It doesn’t hurt anybody,” he said.

One of those nice athletes, they agreed, is Oklahoma star Buddy Hield, who signed every autograph after Wednesday’s team practice session and asked if LaForce had any more questions after she interviewed him, shee said. Lundquist, LaForce and Spanarkel will call the West Region final on Saturday between OU and Oregon on TBS.

Lundquist, even at 75, has no current plans to retire from broadcasting, but when he does he’ll enjoy watching LaForce grow and develop as a reporter and on-air personality.

“Without embarrassing her, I think Allie brings a rare combination of intelligence and warmth to her role,” he said. “Not because she’s sitting three feet away from me, because I would say this if we were separated by 4,000 miles: I think she’s got the potential to be as good as anybody ever has been in that role.”

“It’s pretty unreal to hear him say that out loud,” LaForce replied.

Lundquist and LaForce are about to finish what he calls the two most strenuous broadcast weeks of the year, but those long days are where you can have fun and show your personality to a huge audience.

“In football, there’s one game every Saturday and it’s more serious,” LaForce said. “In basketball, we can have a little more fun throughout the broadcast in the way we talk back and forth to each other. As he’s talking to me and I’m talking back, we’re looking at each other across the court so we can see each other giggling or doing hand gestures towards each other.”