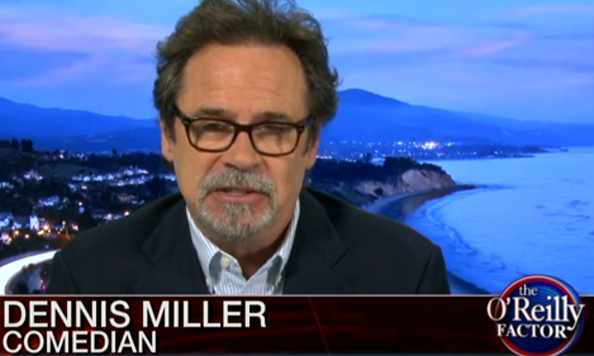 Comedian and former Monday Night Football personality turned strongly-conservative commentator Dennis Miller apparently has some strong thoughts on ESPN. As Michael McCarthy writes at The Sporting News, Miller appeared on Bill O’Reilly’s “The O’Reilly Factor” Fox News show Wednesday night and compared the Worldwide Leader to North Korea for firing Curt Schilling and then editing his “bloody sock” game out of a 30 for 30 rebroadcast:

“It’s like ESPN-O-R-T-H Korea is what it’s turning into over there,” he told O’Reilly.

Miller then went on to make all the puns you could expect:

O’Reilly seemed to agree about ESPN’s supposed liberal bias, too:

“If you look at their mainline guys, most of them are left-wingers, there’s no doubt about it,” he said. “Southpaws, Billy, southpaws,” Miller corrected him.

Miller certainly knows something about being let go by ABC/ESPN/Disney, given that he was replaced after just two seasons in the Monday Night Football booth. Whether his claims of ESPN’s liberal bias are exaggerated is another question, though. For their part, ESPN has insisted that segment of the film was edited out as standard procedure following a live event that ran too long rather than anything to do with Schilling, but it’s still certainly interesting that that was the segment picked to cut out. The stronger argument may be that ESPN cares more about making money than about political positions, and that Schilling was let go more for constantly challenging the hierarchy and embarrassing the brand with his various political outbursts than for his particular stances, but hey, at least this let us see Dennis Miller compare ESPN to North Korea. Does that make ABC and Disney Iraq and Iran on Miller’s personal axis of evil?