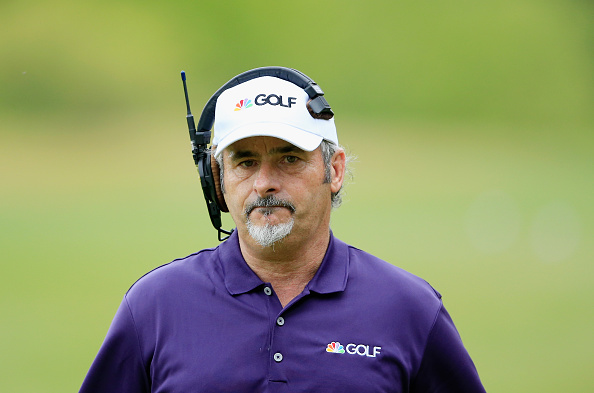 This has been a year of transition for David Feherty. After being on CBS for two decades, he’s switched to NBC/Golf Channel where he’ll work several tournaments that he didn’t get to broadcast including the Players Championship, the Open Championship, and for the first time, the Olympics.

Over the years, he’s been open talking about the baggage that has plagued him over the years, alcoholism, depression, the struggles to remain sober and the number of pills he has to take each day to keep him on the bright side of life.

On tonight’s edition of HBO’s Real Sports, Feherty tells host and huge golf fan Bryant Gumbel about his past struggles and some of the triggers for his depression. We have some partial transcripts of the interview:

BRYANT GUMBEL: “How many pills you take a day?”
DAVID FEHERTY: “Let me see. A dozen?”

BRYANT GUMBEL: “Mood stabilizers?”
DAVID FEHERTY: “Yes. And they always confuse me, you know, taking a mood stabilizer. Because you better make sure you’re in a good mood when you take it.”

You can see some of the trademark humor from Feherty there. He told Gumbel that in his native Northern Ireland, there were two things at which he was good, drinking and golf:

DAVID FEHERTY: “I was a spectacular drunk. I was good at it. It kind of brought me out of my shell, I think, initially. And then I just developed a tolerance, which was extraordinary.”

BRYANT GUMBEL: “Was the objective to get to the place or was it just a great companion?”
DAVID FEHERTY: “It was always to get to the place. And every alcoholic or addict will know what that means. For most of us, I think it’s close to oblivion.”

BRYANT GUMBEL: “Alcohol tends to take not only your sense away, but money too.”
DAVID FEHERTY: “I drank a Porsche every year, probably. Couple of bottles of whiskey a day.”

BRYANT GUMBEL:  “Always whiskey?”
DAVID FEHERTY: “Not always. You know, sometimes I would drink vodka and Gatorade, because I was still an athlete.”

As much as he jokes about his ability, Feherty won five times on the European Tour and did well enough to represent Europe in the Ryder Cup, but he found his calling when he moved to the United States to join CBS and became one of its most popular commentators along with Gary McCord. But even so, he still likes to poke fun at himself for falling to the point where he needed pills to play golf:

DAVID FEHERTY: “I had bad elbows when I played. And, you know, got into painkillers.”

BRYANT GUMBEL: “Percocet, Vicodin?”
DAVID FEHERTY: “Yeah, Vicodin, mostly. Percocet if I got lucky. And I needed more and more to get to that place where I wanted to be, comfortably numb.”

Real Sports With Bryant Gumbel will air at 10 p.m. ET/PT on HBO and will be available online at HBO Go and HBO Now.