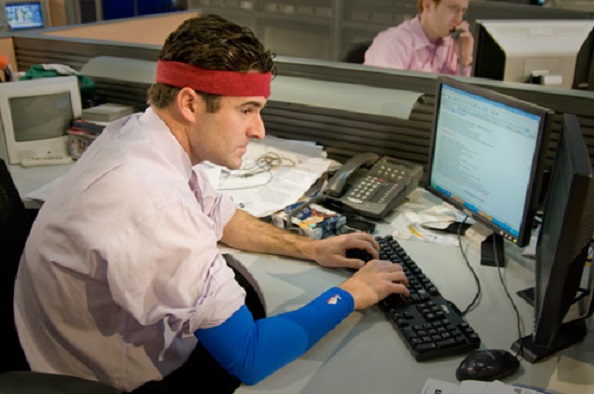 Going by his tweets, Darren Rovell seems to be a pretty big proponent of capitalism. Specifically the idea that, so long as the market wants it, just about anything goes. Rovell is about to find out just how much the market, and his employer, want to keep reading his tweets as his contract with ESPN is set to expire in the coming months, according to Sporting News’ Michael McCarthy.

Recently, the Worldwide Leader has been purging talent such as Bill Simmons, Keith Olbermann, and Colin Cowherd while also watching notable names like Mike Tirico and Skip Bayless sign with their media rivals. Almost all of it has been in the name of cost-cutting as ESPN’s drop in value has hit parent company Disney hard.

On one hand, Rovell has carved out quite the niche for himself. Like it or not he’s considered a legitimate influencer on Twitter and has broken quite a few sports business stories that became big deals.

On the other hand. Rovell is reviled in many circles (see: The Internet). He’s considered by many to be a shill to corporations such as Nike and lets that influence his coverage. Some of his opinions strike off-putting chords and just the idea of him discussing issues like race or exploited workers is enough for send readers into a frenzy. His fellow ESPN co-workers have been known to call him out regularly and so have the sports franchises he covers. His lack of accountability can border on unprofessional. He created rules that everyone else should follow when using Twitter and casually disregarded a huge chunk of them.

Not to mention he just has this way of getting under people’s skin without even trying.

@darrenrovell Gee, thanks! You confirmed a solid story that didn't need your confirming. You're so keen.

And sometimes while trying very much…

@darrenrovell I talked to your old boss Mark Lazarus. He said he misses the 15,000 people who watched your CNBC show.

According to McCarthy, Rovell makes roughly $500,000 a year from ESPN and also has a separate financial arrangement with sister network ABC. That salary was reportedly double what he made at CNBC, where he spent time in between his first and second stint with the sports network.

While it could make sense on one hand for ESPN to let Rovell walk if they don’t feel as though he’s worth the hassle (or money), the flip side is that they’ve recently failed to re-sign multiple talents and might want to re-up Rovell simply to prove they still have the ability to hold on to someone, anyone. Also, as much disdain as you might have for him, Rovell attracts an audience, especially on social media.

The sports landscape looks a lot different today than it did a decade ago. There are plenty of competitors cutting into ESPN’s audience share and revenues, not to mention their talent pool. At the end of the day it comes down to value and we’re all about to find out just how much ESPN values Rovell.

It is what it is.