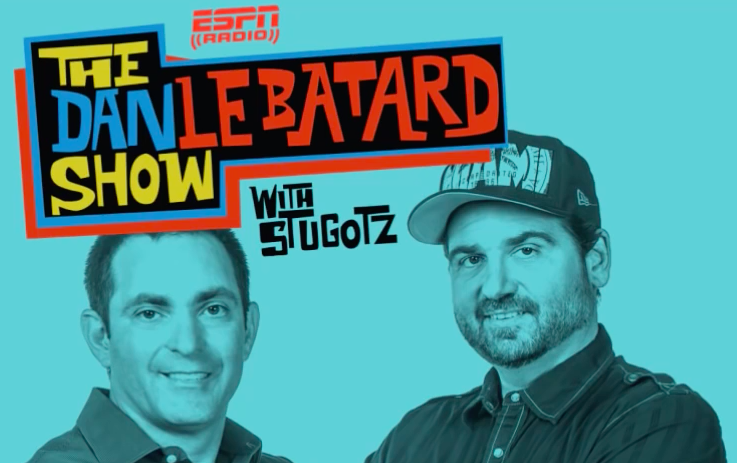 Someone has to do it. Someone must lead us out of the muck to the salvation of higher ground. Dan Le Batard might be that perfect revolutionary to guide America to a better sports radio experience.

Right now, The Dan Le Batard Show with Stugotz is the premiere sports radio show going. If that sentence causes your eyes to twitch with rage and your blood pressure to dangerously soar, that’s on you.

To quote Gonzalo “Papi” Le Batard: “You don’t get the show.”

There are plenty of choices in sports radio land. Many are terrible. The search for something informative, entertaining, and different can seem like a hunt for a $2 bill. Your limited choices generally fall into these categories of show that takes itself way too seriously (looking at you, Mike Francesa), show that’s flavorless (looking at you, Mike & Mike) or show with scalding takes simply meant to incite (looking at you, Colin Cowherd).

Sometimes this audial onslaught can make you lose faith in humanity. You’ll want to gouge your eardrums out with a rusty spoon after all the name-calling, unfunny jokes, and manufactured arguments over who/what is to blame for your team’s misfortune.

The Dan Le Batard Show is a respite from this mind-numbing drudgery. Sure, Le Batard is polarizing and delights in being the guy many people despise. But his show is (thankfully) the antithesis of virtually every other sports radio program out there. He is fearless, humorous, and enlightening whether the topic is race, the NCAA’s exploitation of student-athletes, or disagreements with his employer, ESPN.

Think of The Dan Le Batard Show as a rollercoaster that has skidded off the tracks. It’s spontaneous and careens out of control on the edge of danger. But once it’s over you’re left thinking: “Man, than was a thrilling ride. Can we do it again?”

The set-up is simple. Le Batard has smartly surrounded himself with the right foils. Co-host Jon “Stugotz” Weiner yearns to do a traditional sports show (He lobbied on-air to replace Skip Bayless on First Take – easily the worst thing ESPN has ever created). The rest of Le Batard’s staff joins in on the fun, led by executive producer Mike Ryan who also occasionally doubles as the voice of an irrational Miami fan.

Batard’s banter with Stugotz and Ryan forms the gist of the show. He likes to describe it as  “sloppy by design.” But it’s amazing how effective chaos can be.

What makes The Dan Le Batard Show an enjoyable listen is that it’s a parody of sports radio. It’s satire of the highest form – almost performance art. They mock the entire genre. The show has polls that poke fun at the silliness of sports polls and there’s a weekly feature segment with an animal expert. Le Batard even occasionally goes rogue and gets suspended.

#poll Who would win a fight @dannykanell or Dan Le Batard? -Guillermo

That’s not all. Any given day the guest list could be a menagerie with names like Ta-Nehisi Coates, John Amechi and Carrot Top. Le Batard despises putting coaches on his show because they often revert to sanitized coach-speak. If he does have a coach on, it’s usually for unusual reason. Like the time Michigan State’s Tom Izzo played Christmas songs on his accordion.

If that doesn’t scream different, nothing will.

To be fair, the show is an acquired taste. If you’re a first-time listener, you won’t get many of the inside jokes. The Kentucky Fraud Chickens won’t seem funny at first. Nor will Stugotz scheming, bulldozing, and name-dropping his way into getting a fine dining reservation. You might, however, appreciate The Sports Whisperer and you will definitely understand the show’s Looks Like game.

On the Dan Lebatard show they just said Jay Cutler looks like the guy breaking into someone's house on the alarm commercial. I'm cryyyying.

The biggest complaint about The Dan Le Batard Show is that it’s not sportsy enough.  His detractors expect to hear hardcore, Wonder Bread sports talk radio. They don’t understand why Le Batard would rather talk about pop culture – such as the death of Prince – then preview the NFL draft.

The Dan Le Batard show is the AIDS of radio.

Undeterred, Le Batard is not going to kowtow. He continues to point out the ridiculousness of sports fans being serious and hostile about games. Le Batard sees sports as strictly entertainment. He sometimes equates getting mad at athletes to being indignant at circus clowns.

When Le Batard does have something important to say, it’s poignant. Last week, Le Batard criticized ESPN – the company that has made him rich – for giving Kentucky coach John Calipari an all-day platform before the NBA Draft. Predictably, some chose to focus on the messenger instead of the message.

Le Batard didn’t blame Calipari for taking advantage of the situation. He blamed ESPN for giving Calipari a massive recruiting tool. He also continues to give a voice to the unjust college system where coaches are made millionaires thanks to the labor of unpaid workers. (Please save your they-get-paid-with-a-scholarship takes). Most of the NCAA rulebook was written long before explosion of big TV money.

Is that sportsy enough for you?

Le Batard isn’t the only one doing quality sports radio. Steve Czaban and Dan Patrick are among the best in the business. But no one – perhaps ever – has put together a show quite like this.