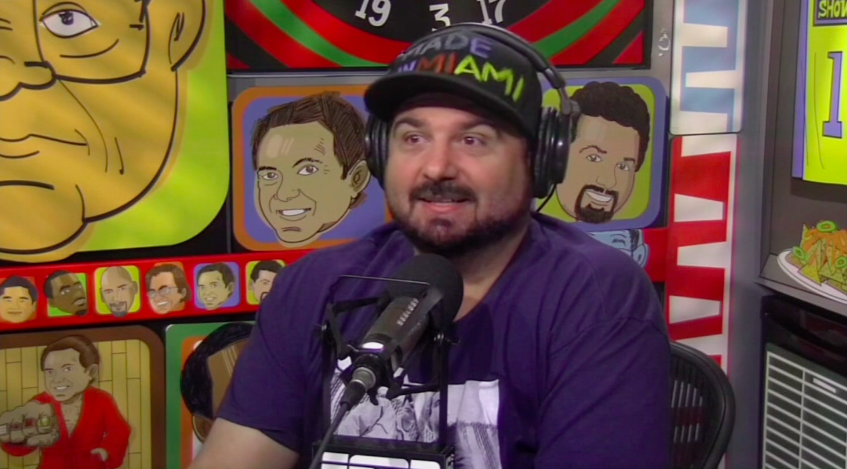 
What began with a mangled penis ended Friday morning with Dan Le Batard screaming on air for the local radio station he works for to fire him.

The drama started when Le Batard interviewed Miami Herald reporter David Ovalle during the local hour on 790 the Ticket in Miami about a story he’d written on a woman sentenced to 40 months in prison for botching an illegal surgery on a guy’s penis.

Well after the interview, someone at 790 the Ticket apparently asked the host to move on and talk about something besides messed-up manhoods, like perhaps the Cubs winning the World Series for the first time in 108 years.

Le Batard, whose parents are Cuban defectors and who continually beats the drum for freedom of speech (and the semi-related freedom to say whatever the hell you want on the radio), was pissed. Really pissed. Here’s the audio:

And a transcription from Slice Miami:

“We’ve got someone locally already doing what Mike was fearing nationally, which is threatening to yank us off the air if we play it. And what I’m telling you is that I value things more around here—and I love you guys, love you guys, and we’re in the mornings now because of you guys. That’s how much I love you guys. … But nothing matters to me more than you don’t control what comes out of my mouth and we’ve got someone going crazy locally right now saying they’re gonna yank us off the air if we continue to talk about this. And what I’m telling you right now is: Fire me. Not only never do that again, fire me now if you want to control me that way. Now. Yank us off the air now. Go to whatever you want to go to on 970.”

“I don’t want to get up at 9 o’clock in the morning, man. I’m doing this for Miami, and I’m doing this for 790 the Ticket. Yank me off the air now. Fire me now. Cancel my contract now. You can have your money and you can have your 9 o’clock hour and I can get my sleep. Because this is infuriating. This isn’t even happening nationally, this is happening locally. When I negotiated my contract, what I was negotiating was not money, it’s, you do not control what comes out of my mouth. You’re threatening to take me off the air because I’m talking about a story that was in the Miami Herald? Man, get the hell out of here. I don’t know where that edict is coming from, but tell that person to go fire me. You’ve got to be kidding me, man. It’s in a newspaper! You’re so afraid of a penis that I can’t talk about something? That’s such a Miami story. This is exactly what I don’t want to be governed by. These people who make these judgements that are just filled with fear about stupidity. It was in a newspaper that has more credibility than any radio station in the newspaper has ever had.

“Infuriating. Like, don’t ever do that again where you bombard my people with threats about what you’re going to do if we keep talking about something. You’ve got to be bleepin’ kidding me. Do you know how Miami that story is. And how interesting that story is.

“I’ll tell you what this presses on—and I know this is as mad as you’ve ever heard me. I’ll tell you what this presses on. I’m shaking. My parents came from communism, man. Nothing matters more to me—nothing—than when this microphone is in my face, I say what I want. Not controlled by Disney, not controlled by a boss, not controlled by anybody. Do you know what my parents did to get me that freedom? Do you know what my parents suffered to get me that freedom? I have never been this angry on the air. Never. Fire. Me. I’m not even daring you, this is actually something I believe in. I’m not being obnoxiously defiant with ego about this. This is what my parents fled. You will not control this. No, you will not. Money doesn’t matter to me. Man, I love you guys. I don’t want to be up at this hour, and now you’re saying you’re gonna control what I say at this hour when I’m doing it for you? I’m doing it from 9 to 10 for you, man, so that you can have our show. I did this show FOR FREE locally because of how much Miami matters to me. You got to be bleepin’ kidding, man.”

After Le Batard settled down, producer Mike Ryan reported that ESPN was supportive of the interview and was willing to let them re-air the segment nationally. Le Batard followed by pronouncing that he wouldn’t mind being fired from 790 The Ticket.

“I’m telling you it’s a worth reason to be fired. How funny is that, symbolically? Fired for talking about a surgical penis mangling. I’m telling you, I’m good with that, if that’s how it ends. That’s how it should end.”

Le Batard then started daydreaming about the anti-censorship rallies people would hold in his honor if he were fired. He also began speaking in past tense about how he enjoyed doing the local hour in Miami, and it sound like he was getting genuinely emotional.

It’s kind of hard to make sense of all of this. On one hand, the penis story was interesting and relatively inoffensive. On the other hand, an employer telling an employee what he can’t talk about on public radio isn’t exactly a First Amendment issue. Presumably many radio hosts would be upset about something like this and few would throw this kind of fit live on air.

Le Batard is a great writer, a great radio host, a fun TV personality and also a Simmons-esque pain in the backside of whomever he’s working for. That’s kind of what makes him fun. For Miami’s sake, let’s hope 790 The Ticket doesn’t take his advice and fire him.