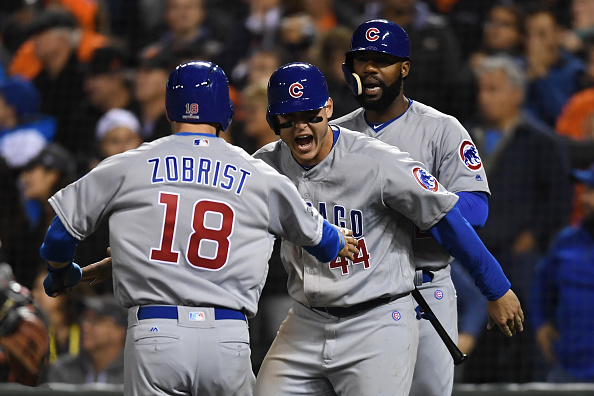 How do you post record ratings for your cable channel? Broadcast a crucial playoff game between two teams with large fanbases in a good time slot that goes right down to the ninth inning, apparently. That’s what happened with Game 4 of the Cubs-Giants NLDS on Tuesday, which was the most-watched telecast by average viewership in FS1 history:

Of course, the game could have drawn even more viewers if it had aired on the Fox broadcast network, a complaint often made by many. There are good reasons to put a game like this on FS1, though, as Richard Deitsch illustrated with his apt response to someone who suggested the move to Fox:

@richarddeitsch still dont know why MLB wont put it on Fox. Playoffs should be used to gain new fans

Because Fox has sunk millions into FS1/MLB rights and they need cable carriers (which moves the $ to you) to pay for their network. https://t.co/3wS2XuGEZs

Indeed. Cable networks definitely need live rights to attract both viewers and subscribers, and they’re making progress on that front; FS1 posted its second-most viewed event ever earlier in the Giants-Cubs series with 5.7 million viewers for Game 1, while MLB Network reached record viewership of its own with 4.6 million on average tuning in for Game 2 of this series, and ESPN drew 7.4 million for the NL wild-card game between the Giants and Mets. TBS’ ALDS coverage has also been drawing good ratings. There’s no dispute that these games could pull bigger ratings on broadcast TV, but having them is huge for these cable networks, and it’s certainly positive for FS1 to see an all-time record. That shows not just that they had an attractive game to broadcast, but also that their channel’s continuing to gain some traction.