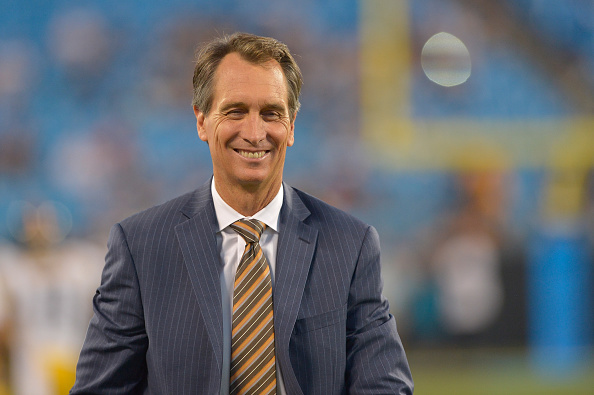 It’s been widely reported that Mike Tirico will be joining NBC and calling Thursday Night Football this season. According to the Miami Herald’s Barry Jackson, his partner will be Sunday Night Football analyst Cris Collinsworth:

At the NFL owners meetings in Boca Raton last month, NBC Sports chairman Mark Lazarus told me that Michaels and Cris Collinsworth, who call the network’s Sunday night games, “were both concerned about the added workload. It’s a full time job to do one game a week. It’s not just adding a three-hour broadcast. It’s a substantial amount of work. Nobody raised their hand and said I really want to do double the workload. They were all team players and understand the importance to the company.”

Lazarus said one of the two announcers had more concerns than the other — he declined to say which one — but it apparently was Michaels, who’s 71. Collinsworth will do the entire Thursday and Sunday packages.

Collinsworth has called Thursday Night Football before, during the first three years of the package on NFL Network from 2006-2008, then when John Madden retired from NBC, he took over as analyst on SNF in 2009. Now Colllinsworth will double up as the color man on NBC’s half of TNF which will begin in Week 9, November 3 with Atlanta at Tampa which will air on NFL Network.

NBC’s first Thursday Night game to air on the Peacock will be in Week 11 when New Orleans visits Carolina.

So our NBC TNF team apparently will be Mike Tirico, Cris Collinsworth and a sideline reporter who has yet to be named.