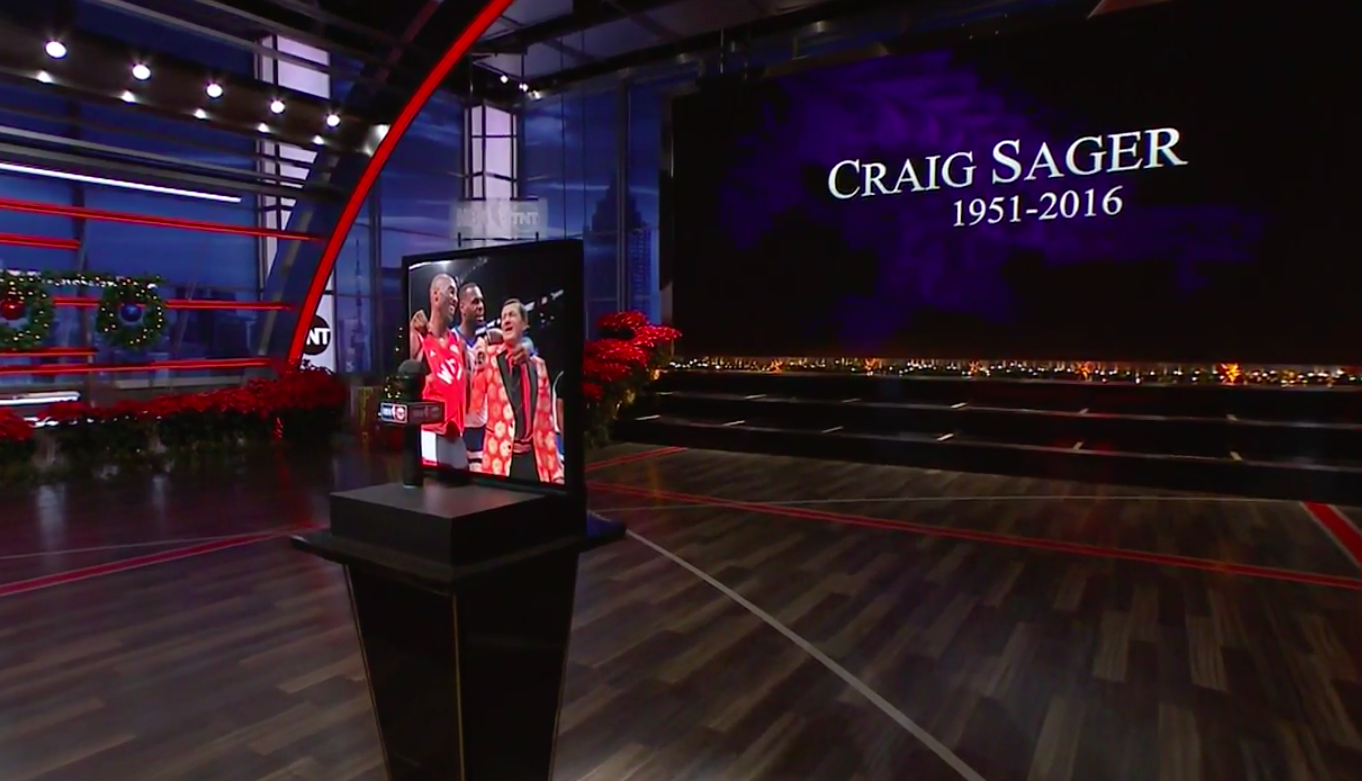 Turner Sports broadcaster Craig Sager passed away on Thursday after a long battle with acute myeloid leukemia. Tributes have been rolling in from all over the sports media landscape but it’s the tributes from Sager’s co-workers at TNT and NBA TV that really hit home the most Thursday day.

The evening’s NBA telecast began with Casey Stern, who was filling in for Ernie Johnson, to let people know that the loss of their “buddy” was going to be the focus of the evening.

The NBA on TNT then introduced their absolutely wonderful and poignant tribute video.

Casey, Kenny Smith, Charles Barkley, and Shaquille O’Neal then began sharing the first of many stories about Sager, what he was like to work with, and more importantly what he was like as a person.

“He’s the reason why I’m here at TNT,” said Smith. “Because he’s the first person to look at me and go, ‘Kenny, you’re pretty good at this.'”

“We lost a brother and a friend,” added Shaq.

“I feel like I lost a brother today,” shared Barkley. “He had the most positive attitude of anybody I’ve seen going through that situation. My life is better. Sports is better for knowing Craig Sager.”

From there, the Bulls-Bucks game got underway but it might as well have been a backdrop to more discussion and honors for Sager. Announcers Brian Anderson, Reggie Miller, and Dennis Scott began their broadcast talking about how they want the broadcast to be a celebration of Sager’s life.

Even the Coach’s Corner segment, usually meant to give some insight into how NBA coaches are approaching the game, was all about remembering everyone’s favorite sideline reporter.

You can’t have conversations about Craig Sager and not talk about fashion. Sager’s loud outfits became his trademark and Kevin Garnett joined the halftime crew to talk about their favorite fashion choices.

Before the second half began, Anderson and Miller took some time to tell a few more stories and point out the many ways players and fans paid tribute to Craig at the game.

The players, the people who interacted with Sager before, during, and after games, also shared their thoughts and remembrances. Here’s Bucks forward Jabari Parker with his.

Over on NBA TV, Grant Hill called in before the game to share the story of when he first met Sager right after getting drafted. Even though he was about to hear his name called and meet the commissioner, “I was more excited to meet Craig Sager.”

Also calling in was Marv Albert, who had worked countless times with Craig. “When I think about Craig, he was so underrated. He was particularly known for his…unusual outfits. People might not realize how good he was as an interviewer.”

KG, Kenny, and Chris Webber also took time out on NBA TV to share yet more stories and memories.

Of course, The Starters began their show with a stirring tribute to Sager as well. They played Sager’s beautiful speech from the ESPYs and also shared the condolences and love from former and current NBA players.

More tributes and remembrances are sure to keep rolling in. It’s a testament to how beloved Craig Sager was and the impact he had not only in the TNT and NBA TV family but also in the sports community at large.