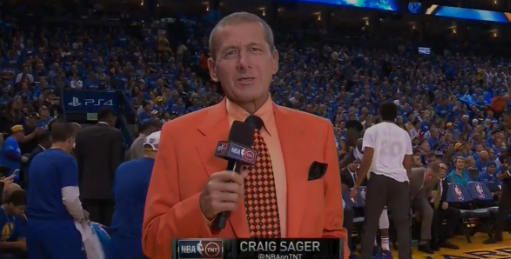 Normally, you wouldn’t see a NBA on TNT reporter on an ESPN on ABC telecast and vice versa, but when you talk about Craig Sager, one of the most well-liked people in sports television, you make an exception. Sager has worked just about all facets in the NBA, the regular season, All-Star Weekend, the playoffs, but he’s never been on an NBA Finals in the years Turner Sports has telecast the Association. That will change on Thursday night with Game 6 as he will work the Finals for ESPN on ABC.

Whether it was CBS, NBC and now ESPN/ABC, Sager’s assignments usually have ended with the Conference Finals. But Turner Sports and ESPN have worked out an agreement where he can work what could be the championship-clinching game for the Golden State Warriors on Thursday.

In the official ESPN announcement, Sager is quoted to be quite thrilled to be finally working an NBA Finals:

“I’d like to thank Turner and ESPN for approaching me with this tremendous opportunity to be part of The Finals broadcast team,” said Sager. “I’ve been watching the series very closely and, while I do not want to distract in any way from the event itself, I look forward to being in the building for what will be an incredibly exciting Game 6. The NBA community is a very special one and this is a great honor.”

Sager will join Mike Breen, Mark Jackson, Jeff Van Gundy and Doris Burke for Game 6. Breen and Sager have worked together before on NBC on the Olympics. Breen and Burke officially welcome Sager for this special ESPN/TNT mashup:

As you’re well aware, Sager has been battling leukemia since 2014 and has been regularly undergoing treatment while continuously working the sidelines for TNT. Next month, ESPN will present Sager with the Jimmy V Perserverance Award at the ESPY’s and in August, he’ll head to Rio to work for NBC on the Olympics basketball tournament.

It’s a wonder that Sager hasn’t had the opportunity to work the Finals in his long career, but he’ll finally get that illustrustrious assignment on Thursday.