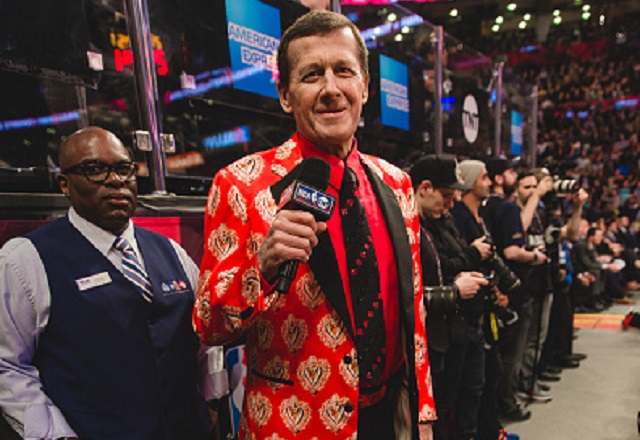 TNT reporter Craig Sager recently revealed that his leukemia is no longer in remission, though has made clear that he continues to receive treatment as he returns to work the sidelines during NBA and NCAA broadcasts.

In the meantime, Sager’s fellow NBA sideline reporters throughout the country are now paying tribute to their colleague and his famous fashion sense by sporting garish outfits of their own on the job. You can find many examples of these bold ensembles and those showing support for Sager with the hashtags #SidelineForSager and #SagerStrong.

Here are but a few photos from Tuesday night on many NBA sidelines:

My tribute to Craig Sager for @memgrizz & @chicagobulls
We're praying for you from the sidelines!#SidelineForSager pic.twitter.com/EX1YPO9KI8

Craig Sager is an inspiration to anyone who's ever picked up a mic! We are all praying for you

Those of us on the @NBA sidelines are thinking of the best to do it, Craig Sager, as he fights on. #SidelineforSager pic.twitter.com/Qe22LXn3G9

ICYMI: My Craig Sager-inspired outfit for @hornets at @Raptors game! We all wish you well Craig! #SidelineForSager pic.twitter.com/WBZwhZ2XGX

Not only is this a thoughtful, touching tribute to a man fighting a very public battle with cancer, one whose work we’ve followed and admired for years on our televisions, but NBA fans throughout the country are the beneficiaries of some visual sartorial splendor. NBA sidelines and time-out reports have never looked better and brighter, making our high-definition TV screens truly pop and show what colors they’re capable of showing. It’s a really nice gesture and a testament to the love and respect Sager has among his colleagues throughout the league.

Sideline reporters across the NBA honor Craig Sager as he continues his battle with leukemia. #SidelineForSagerhttps://t.co/Yjr2464tIC

So when does Gregg Popovich wear something bold, bright and colorful in homage to Sager in front of the San Antonio Spurs bench?