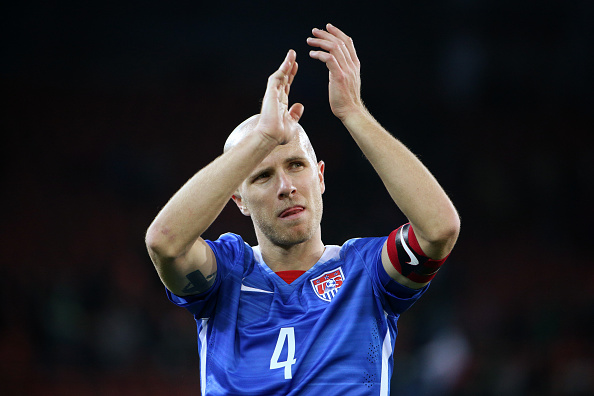 The Summer of Soccer in the U.S. has finally arrived.

The 16-team Copa America Centenario begins Friday night and will be held on American soil— and outside South America— for the very first time.

The U.S. Men’s National Team will open the tournament against Colombia from Levi’s Stadium in Santa Clara at 9:30 eastern on Fox Sports 1. Every game will be broadcast on the Fox family of networks, culminating with the championship match on June 26 from Metlife Stadium in New Jersey.

“Other than World Cup qualifiers, it’s the first time since the 1994 World Cup that the talent at this level is coming to the country to play with their best players in a competitive environment,” Fox lead analyst Brad Friedel, who will call the top games with John Strong, told Awful Announcing. “It’ll be a great spectacle to see.”

With this being the 100th anniversary of the tournament, the 10 teams from South America (CONMEBOL) have really long histories and long-standing rivalries with one another that will play out on this special American stage.

There will be four groups of four playing each other once, with the two two countries from each group moving on to the quarterfinals. The U.S. is in Group A with Colombia, Costa Rica and Paraguay. Brazil, Ecuador, Haiti and Peru make up Group B; Jamaica, Mexico, Uruguay and Venezuela are in Group C; and Group D is comprised of Argentina, Bolivia, Chile and Panama.

“It’s not often we get to host this size of a tournament in the United States,” Fox analyst Stu Holden told Awful Announcing. “If you’re a soccer fan and you’re not interested in Copa America, I think there’s something wrong with you.”

Friedel and Holden went in depth with Awful Announcing on a number of topics to help us preview Copa America, starting with the biggest matchups in the group stage.

The big one here in America will be the opener between the U.S. and Colombia, which will set the tone for the fans in the states.

“As U.S. soccer fans, we all want to have some hope. We want to have a team to root for,” Holden said. “We want to know that our team has a legitimate chance in this tournament, and I think that if the United States can get a result against Colombia, then I think that’s going to start almost a momentum around the tournament for U.S. fans, for the other fans, because it’ll get a ton of coverage.”

Colombia, the best team in the group according to Holden, boasts midfielders Juan Cuadrado from Juventus and James Rodriguez from Real Madrid.

“They’re attacking three is up there with some of the best in the world,” he said.

After the Colombia match, the U.S. plays Costa Rica on June 7 from Soldier Field in Chicago and Paraguay on the 11th from Lincoln Financial Field in Philadelphia.

Holden is looking forward to the Mexico-Uruguay matchup on June 5 from Glendale, Ariz., with Chicharito and co. taking on Luis Suarez and the Uruguayans. Friedel is excited to see Argentina’s Lionel Messi “for obvious reasons,” and their June 6 matchup with Chile from Santa Clara will be a re-match from last year’s Copa America final, which Chile won on their own home soil. So Argentina will be looking for revenge.

This tournament is usually only 12 teams, but is expanded this year to include six CONCACAF teams from North and Central America, so Friedel will be pulling for them.

“I would love for our region to get stronger.”

Mexico plays almost all their friendlies in the U.S. and draws incredibly well wherever they go here, Holden said, so “there are essentially two home teams in this tournament.”

El Tri will be playing its group stage games in Glendale, Pasadena at the Rose Bowl and at Houston’s NRG Stadium and sold out crowds are expected for each match.

“I wouldn’t be surprised to see them outdraw the United States in all of their games,” Holden said. “In fact, I actually think that they will.”

U.S. head coach Jurgen Klinsmann’s 23-man roster is set, and the move generating the most attention is adding veteran forward Chis Wondolowski to the squad instead of 21-year-old Jordan Morris.

“That’s something Jurgen would have seen through his training camps,” Friedel said of Klinsmann’s decision to omit Morris.

Klinsmann has elected to start with a more attacking 4-3-3 lineup, with more men up front that the U.S. has had in the past. Holden called this squad one of the deepest American teams we’ve ever seen.

Aside from the usual American stalwarts including Clint Dempsey, Michael Bradley and Geoff Cameron, Friedel, Holden and the rest of America’s soccer fans are most excited by 17-year-old Borussia Dortmund first-team midfielder Christian Pulisic, who’s made waves in the German Bundesliga at such a young age.

He’s expected to come on as a substitute each game at around the 60th or 70th minute and Klinsmann will see what the kid can do.

Who Will Be In Net?

Klinsmann’s major change is with his goalie, with Brad Guzan taking the reins ahead of Tim Howard.

“It’s an interesting situation now,” said Friedel, who started for the U.S. in the 1998 and 2002 World Cups. “People can debate all they want, but Brad is a very good goalkeeper.”

Now that Guzan, who starred at Aston Villa this past season, is the starter, Klinsmann needs to stick with him, Friedel said.

“I’ve said this many, many times: The weakness is not going to be in goal with the U.S.”

Klinsmann has faced a lot of criticism during his tenure as coach, and leading the Copa America hosts will only intensify the external pressure placed on him.

Is Klinsmann’s job on the line if the U.S. doesn’t get a positive result from the tournament?

“I don’t think Jurgen is thinking about that at all,” Friedel said. “If they’re competitive in however many games they play, then his job should not be under threat.”

“I think that depends on intended result,” Holden said. “If they don’t get out of the group, it would depend on the fashion. If they lost all three games, then certainly that discussion needs to be had and I think he would be under a lot of pressure to the point where he could potentially lose his job. But I think on the grand scale, Jurgen Klinsmann is fairly comfortable.”

Holden expects the U.S. to get out of group play and advance to the quarterfinals and thinks they could even reach the semifinals if they get a favorable opponent like Ecuador.

“You could see the entire country getting behind the team at that point,” he said.

As for the winner, Friedel is going with Messi and Argentina, who would finally get a major win under his belt with the national team.

“If you look through the squad, they’re pretty strong to me,” he said.

Holden is going with a dark horse. While others will pick Argentina and Brazil, he’s taking Mexico. A strong defense and “home field advantage” will make them tough to beat, he said.