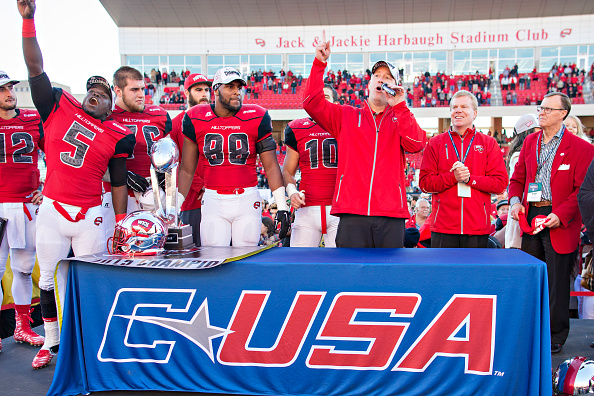 Maybe this is the new normal for the lower-rung FBS conferences. Conference USA has to deal with less money in its new TV contract. It will have ESPN, CBS Sports Network and the Sinclair-owned American Sports Network airing games starting this season, C-USA will need to find a way to make up for lost revenue from Fox which opted not to return for the new deal. The Huntington (WV) Herald-Dispatch reports that Fox “has pulled completely out” of the conference’s TV negotiations leaving a big potential hole in the league’s coffers.

The total amount of the contract is expected to be at most in the neighborhood of $7 million annually and at minimum, $5.5 million.

According to the Virginian-Pilot, member schools will see up to $500,000 less from the networks for 2016-17 as compared to last season. And the league is once again signing with ESPN after attempting to split from the Worldwide Leader in 2011.

The Herald-Dispatch says ESPN will get its pick of the first five football games followed by CBS Sports Network selecting the next five. American Sports Network will have the rights to 15-20 games. And there’s a 4th television partner that’s in the works, but has yet to be announced (NBC? A yet unknown party?)

Conference USA schools did expect less money for its new contract, but it appears the hit appears to be worse than expected. With that in mind, the league may have to get creative in making up for the lost rights fees from the previous contract. How C-USA will do that is the million dollar question, but for now, member schools will have to make do with a lot less money.