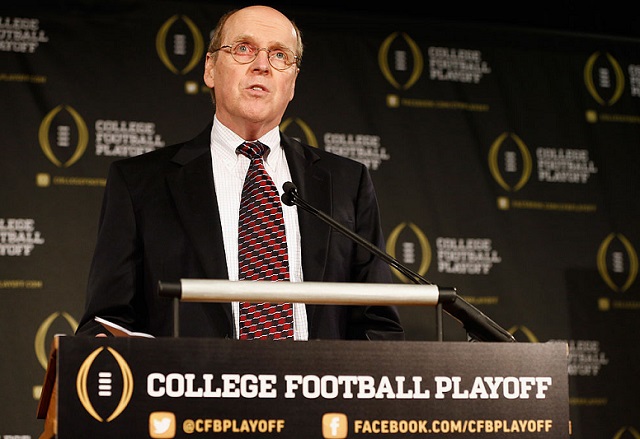 Despite one of the worst rating flops in televised sports history, College Football Playoff officials are not willing to admit defeat on New Year’s Eve scheduling.

During their Wednesday spring meeting, officials were given a presentation by ESPN breaking down why the 2015 semifinal games were down in ratings by approximately 35 percent to their 2014 counterparts. That presentation did account for the change from New Year’s Day to New Year’s Eve, but it also pointed to uncompetitive games and their late starts, as well as a “sophomore slump,” likely due to a decline in novelty.

Those other factors certainly contributed to the event losing 12 million viewers in one year. But it seems obvious to everyone but the people in charge of scheduling that most fans do not want to watch important football games on New Year’s Eve.

New Year’s Eve is a holiday that traditionally spurns a relaxing night in for a raucous night out, or at the very least, casual parties with friends and family with the TV turned off until 11:59. This is not Christmas or Thanksgiving, where sporting events have traditionally thrived. People are typically lounging around the house during those holidays, digesting a hearty meal and looking for a game to distract them from the incessant family time. New Year’s Eve is about as far removed from that as possible.

What makes this scheduling even more frustrating is that the perfect date for the College Football Playoff is literally the very next day, Jan. 1. Almost everyone is off from work, so there is no need to worry about Pacific Coasters missing the start of the early game. And instead of going out, people are married to their couches as they recuperate from the previous evening’s festivities.

There is something to be said for small sample sizes, but when the fix is this painless it seems ridiculous to not make it. However, CFP officials are still married to the idea of collecting more data.

“Pac-12 Commissioner Larry Scott said ESPN has a research guru to “slice and dice” the data in every which way. He said “a confluence of events” for last season’s games had an impact on the ratings.

Scott said conference commissioners and others in the meeting asked a lot of questions about how to weigh the impact of all those different factors. He also said there will be a better feel for things after another year of data.”

As for the other results of the spring meetings, it appears the game sites will continue to shuffle around and avoid returning to the same stadiums as much as possible. Hancock said there is still a lot of interest from cities in hosting the games, and they have identified as many as 12 cities that meet the hosting criteria.

“We want to move the game around. We’re very proud of the fact that the first six games will be played in six different states,” he said. “That is not to foreclose the possibility of somebody getting it again, but I think our attitude will continue to be, if we can move around, we’d like to.”

It took college football this long to get a playoff in the first place, so it should not be too much of a surprise that its officials continue to be less than proactive in finding appropriate solutions.

Ben is a recent graduate of Butler University where he served as Managing Editor and Co-Editor-in-Chief for the Butler Collegian. He currently resides in Indianapolis.