For those of us who consider ourselves “Old Sports Internet,” there are certain things we remember that you kids today just can’t understand.

We remember a time when Bill Simmons columns came with a background color best described as “expired mustard.”

And we remember Sports by Brooks.

Started in 2001, SbB was one of the early pioneering sports properties in the blogosphere back when you could say a word like “blogosphere” and not sound like an old person. For those who weren’t there, it was on par with other growing sports outlets like Deadspin and The Big Lead (predating both of them by years) and it was run by the titular Brooks Melchior, who seemed predestined to become a talking head on an ESPN or Fox Sports 1 debate show. The site was a hybrid of sports & entertainment news, gossip, opinion, and a healthy dose of scantily-clad women, which was the pageview currency of the day for sports websites (and still is for some).

Sports by Brooks was doing well enough by 2012 that they were even breaking news before ESPN (who then went out of their way not to credit them). The future seemed bright for the site and its owner. Then, suddenly and without warning… Brooks disappeared.

The site stopped updating in late 2012. The Twitterfeed was still active but… different. The last time it posted about sports was around April 2013 and subsequent tweets between then and November 2013 seemed to vasciliate between conspiracy theories, software talk, and armed forces veteran appreciation.

As those asking is now on the increase, I'm involved in some creative projects [that include sports] that you will hear about at some point.

As of Nov. 11, 2013, the still-active account never tweeted again. No goodbye messages. No explanations as to why he walked away. Not even any verifiable proof that Brooks was still alive. Sports by Brooks was just gone.

Every so often, someone would bring up the fact that Brooks fell off the face of the Earth. A few put on their detective hats and tried to solve the mystery to no avail. Mostly, we’d collectively forget about the whole episode for a while until someone brought it back to the surface every couple of months.

Whatever happened to Sports By Brooks?

Did anyone ever figure out what happened to Sports By Brooks? Like, how is that not a 30 for 30?

You just wait. Twitter's new algorithm is somehow going to uncover what happened to Sports By Brooks.

Asking what happened to Brooks became a meme that we didn’t even mean to become one. We legitimately wanted to know and our earnest desire for the truth was all we had.

By now, we’ve settled into a comfy existence whereby New Sports Internet doesn’t remember Sports by Brooks, and therefore doesn’t care what happened while Old Sports Internet seems to have accepted that this ghost of sports blogging past will haunt us forever more.

And then Jeff Pearlman found him…

My piece on seeking out Brooks Melchior due Saturday AM. One of the more fascinating stories I've ever worked on. @sportsbybrooks

Wait! To be clear, my Brooks story is NOT coming out Sat. It's literally due Saturday. As in—two long days of writing hell for me.

For those of us who had wondered for four years, it was Christmas in June. To say that people were excited would be an understatement, especially as time passed and Pearlman hadn’t posted the piece. 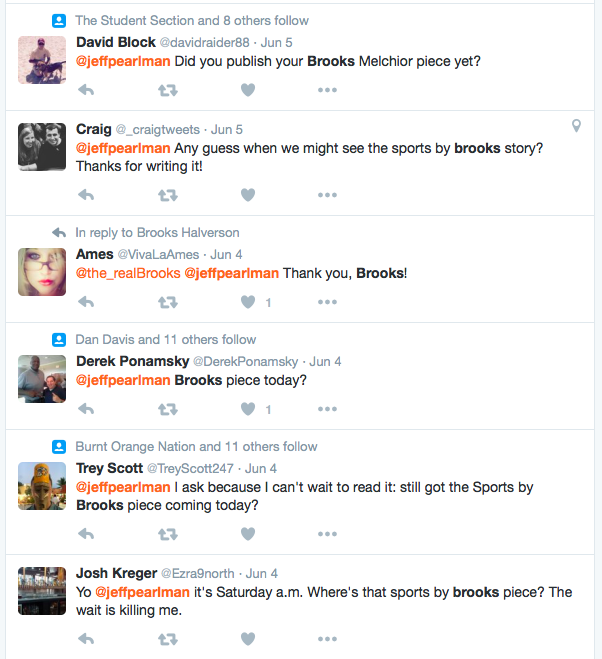 You know that moment in the horror movie where a person says something to the effect of, “Some things should remain buried?” Apparently, that’s what the Sports by Brooks mystery is because just a few weeks later, after what we assume was a nonstop onslaught of pestering by interested and concerned readers, Pearlman dropped the bad news.

I wrote the piece. Then decided it shouldn't run. One shouldn't always find people if they wish not to be found. https://t.co/GaweIFqgQA

Naturally, that just makes us want to know what the deal is even more.

We’ve reached out to Pearlman to find out more details about why the piece didn’t run and he told Awful Announcing, “Can’t help. Nothing personal.”

In the end, maybe it doesn’t even matter. Brooks Melchior, who came into our lives by creating a website that basked in gossip and fact-finding, has somehow found a way to avoid both in a world where that seems impossible. Maybe it’s for the best that we don’t go looking for Brooks.

“Whatever happened to Sports by Brooks” is the gift we get to take with us. It’s shorthand to determine if someone is Old Sports Internet just like you. Just like Brooks.