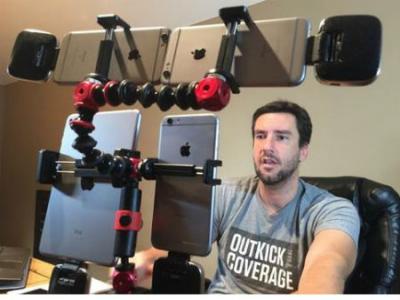 FS1 is making no bones about trying to be more opinionated, more edgy, and more combative in an attempt to finally make the cable network relevant on the national stage.  The ratings might not be there quite yet, but the bombastic rhetoric certainly is.

In fact, Embrace Debate Czar Jamie Horowitz and the regime at FS1 have explicitly stated that they want their sports operation to be more like Fox News and center their efforts around strong opinions.

If FS1 wants to be the sports version of Fox News, what better move for them to make then to enter into a Holy War with Deadspin and Gawker?  A battle between Fox and these beacons of New York based, left-leaning new media has all the makings of the sports version of the War on Christmas.

Enter Clay Travis, former Deadspin writer, and his latest column in which he declares Deadspin dead because they wrote something about co-ed bachelor and bachelorette parties.

Here’s the meat from the opening salvo of Travis’ Deadspin rant, taking out all of the faux outrage about pre-wedding activities, because honestly, who really cares about any of that:

Nearly a decade ago I was an editor at Deadspin. The site was funny, irreverent, witty and smart under founding editor Will Leitch. When Leitch left I was hired to write whatever I wanted and told I would have complete editorial control. Neither turned out to be true. So I left within six months. But A.J. Daulerio, whose post about Hulk Hogan recently bankrupted Gawker, was an entertaining editor who didn’t give a damn who he offended. The site was profane, absurd, and fearless under his leadership.

Deadspin was the little guy punching up in the sports world, the voice of the common fan.

But at some point what had once been a funny and not very serious website decided it was the leader of the PC bro sports media. It became boring, pedantic, perpetually offended, and obsessed with far left liberal sports. It didn’t sound at all like what normal people sound like when they talk about sports.

In short order, Deadspin became what it once hated about the sports media, a self-serious and unctuously predictable cavalcade of boring tripe, constantly refreshed again and again, perpetually marinating in fake outrage.

The really intriguing element to this story is that we haven’t seen a major mainstream media outlet punch back at Deadspin, or even strike first.  It’s been a good number of years since a pre-Hogan A.J. Daulerio went nuclear on ESPN.  Alas, back then, ESPN’s response was predictably muted – they weren’t going to engage with Deadspin or play on Deadspin’s turf because they didn’t want to give the sordid affair any added attention or publicity.

But as a company, and with the hires it has made, Fox is very, very, very different from ESPN in this regard.  They will get down and dirty, sling insults back and forth, and love every second of it.  Why?  Because we probably aren’t talking about Clay Travis or Jason Whitlock if they’re not feuding with someone or trolling them.  Whitlock has already mortal enemies with Deadspin after Greg Howard’s reporting played a key role in bringing down The Undefeated.  Now with Travis trying to take on the site as a tag-team, we have the makings of a full-fledged feud happening here with the battle cries of “PC bros” and “social justice warriors” coming from the Fox brigade.

Or do we?  Fox is building a sports division that seems to be the antithesis of what Deadspin has become.  Now the question remains – will Deadspin engage with Travis, Whitlock, etc. or will they take the position of trying to stay above the fray?  (Imagine reading that sentence seven years ago.)  To be honest, Deadspin hasn’t even paid that much attention to FS1 over the last year or more outside of Whitlock, aside from the odd post about crappy ratings or the Colleen Dominguez controversy.

Deadspin is a very different site than it was all those years ago and love or hate their political leanings, they’ve broken some major news stories in the sports world over the past several years – Te’o, Hardy, and Whitlock amongst them.  In 2016, Deadspin is just as much part of the mainstream as anybody else.  Quite frankly, at this juncture, FS1 may be the ones punching up at Deadspin needing the publicity a good media feud will bring and not the other way around.