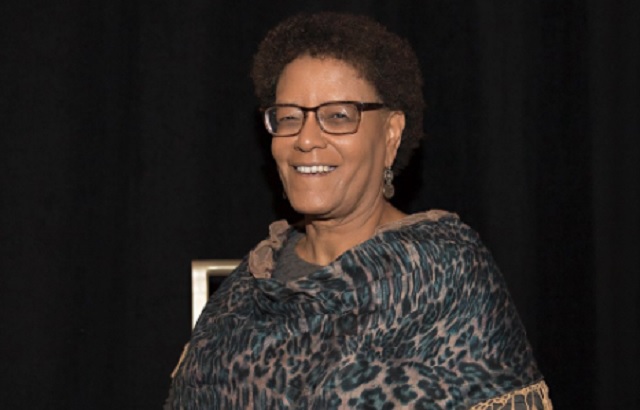 ESPN’s Claire Smith was named the first female winner of the Baseball Writers Association of America’s J.G. Spink Award for 2017. The honor is given annually to a sportswriter for “meritorious contributions to baseball writing.” Smith will receive the award at the Baseball Hall of Fame induction ceremony in Cooperstown next July.

Smith, 62, currently works for ESPN as the network’s news editor of remote productions, tasked with incorporating news and analysis into live game broadcasts, in addition to studio shows like Baseball Tonight and SportsCenter. She has already been a pioneer for female sportswriters, having been baseball’s first female beat writer, covering the New York Yankees for the Hartford Courant from 1983 to 1987. Smith was also a columnist for the New York Times from 1991 to 1998, and served as an editor and columnist for the Philadelphia Inquirer from 1998 to 2007.

As the Inquirer‘s Frank Fitzpatrick mentions in a wonderful profile, Smith’s first baseball story was for the Philadelphia Evening Bulletin and covered Pete Rose breaking Stan Musial’s career record for most career hits in the National League.

“It’s humbling to think of all the people who’ve won this award,” Smith told Fitzpatrick, “all those people I know and know of.”

Fitzpatrick’s story also recollects one of the most important moments of Smith’s career, when she was told to leave the San Diego Padres’ clubhouse during the 1984 National League Championship Series. The team was enforcing its “no women in the clubhouse policy” and employees forcibly removed her. Padres first baseman Steve Garvey learned of the incident, leaving his locker and the reporters gathered in front of it to give Smith the quotes she needed for her story.

Following this incident, baseball commissioner Peter Ueberroth said the leagues, not individual clubs, would decide who has clubhouse access and that no one with proper credentials could be barred.

At the announcement for the Spink Award winner — made at baseball’s 2016 Winter Meetings, held this year in National Harbor, Maryland — Smith asked fellow female members of the BBWAA to join her as she accepted the honor.

Claire is the 1st female recipient of the award. She asked fellow female BBWAA members to join her: pic.twitter.com/j0PibiUSQK

A spectacular, well-deserved honor, but let's not forget that this picture reveals an unfortunate truth: This group should be bigger. https://t.co/v2zxJDFrhV

This is so well-deserved. Claire is a wonderful person and an inspiration to so many of us. Best news that will happen all day. https://t.co/rfLqylU5t7

Claire Smith, who broke barriers so girls like me could dream of covering baseball, becomes the first female scribe elected to MLB's HOF. https://t.co/sPLke6HkNL

Congrats to Claire Smith, ex of NY times and hartford courant, for winning the Spink award, the highest baseball-writing award

Congrats to Claire Smith, winner of J.G. Taylor Spink Award from BBWAA. Puts her in Hall of Fame. 1st woman to win the award. Outstanding.

Well deserved a long overdue. First woman to win the honor. Had to put up with unspeakable exclusion decades ago. Thank you, Claire. https://t.co/fGl6jEy4R1

During her distinguished career, Smith has earned two Pulitzer Prize nominations and three New York Times Publishers’ Awards. She was also the first winner of the Sam Lacey-Wendell Smith Award from theUniversity of Maryland’s Shirley Povich Center for Sports Journalism. Additionally, Smith has been honored as Sports Journalist of the Year from the National Association of Black Journalists, received the Mary Garber Pioneer Award from the Association of Women in Sports Media, and earned the Sam Lacy Award from the Negro Leagues Baseball Museum and Hall of Fame.

“I’ve always tried to drive equal rights in baseball, equal rights in whatever part of society I’m covering,” Smith said to the Inquirer. “It’s the right thing to do and it’s where my words might have influence.”