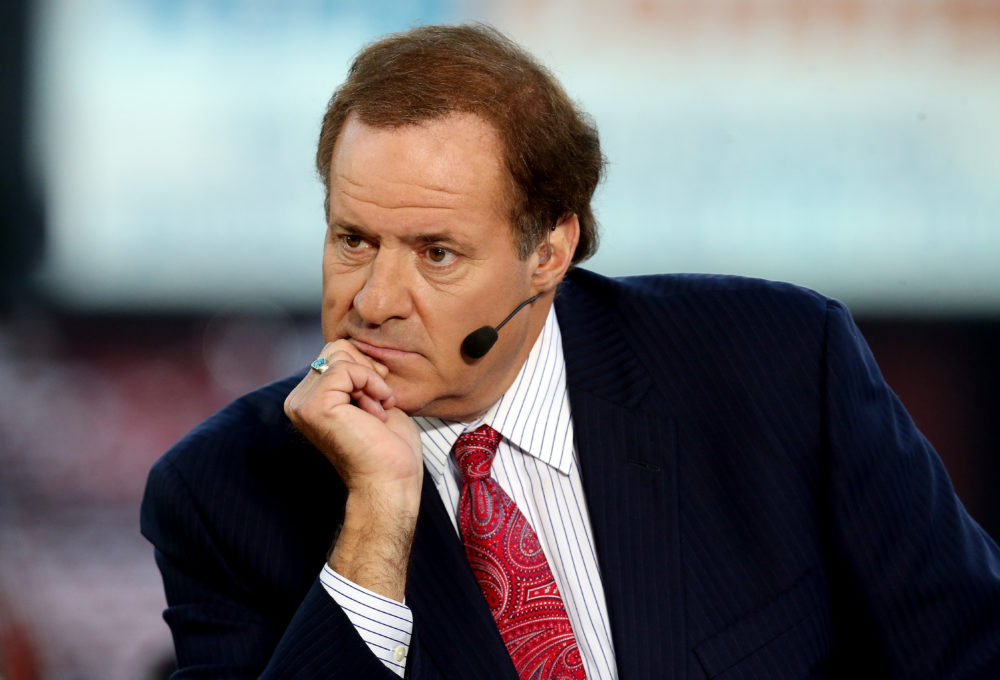 There’s still a lot of uncertainty about what’s ahead for ESPN’s Chris Berman, as his contract is reportedly up after this NFL season. This year has seen reports he’d retire after the season, his agent disputing those reports, rumors he’d step into an emeritus role (which might make a lot of sense), ESPN coordinating NFL producer Seth Markman saying in August “There have not been any decisions made about Berman,” and further speculation about if we’ve seen his last times calling and hosting Monday Night Football. Berman himself provided perhaps a little clarity in an interview on 104.5 ESPN Albany Wednesday.

Here’s audio of the interview in question. The key part starts at 15:25, where the hosts (Rodger Wyland and Zach Bye) ask Berman “How much longer do you plan to keep on doing what you do?”:

Berman responds “Well, probably in the capacity that you’re seeing, not very much longer, but I’m not going anywhere yet. I’m only 61, or I’ll be 62 in the spring. I love what I do, and I think I’m OK at it still. I enjoy hanging out with people that enjoy watching sports, whether it’s in person or it’s through the TV screen. We’ll see what happens after this year, Things will probably change. I’m not going away in moth balls. You won’t have me in formaldehyde, you know, like a butterfly like we used to have as kids, you know what I mean? We’ll see.”

He then goes on to reflect on his time with ESPN, saying “At 24, you don’t necessarily sign up for what happened to me and to this place. You’re hoping the place would last a few years and I’d get some experience and it would be good, and maybe cable TV could be OK. I know that sounds crazy now, with 2,000 stations, but you put it in perspective. It’s kind of amazing. So we’ll see; we don’t really have the answer. I’m not dodging it. The answer may come here soon. The ride that I’ve been on so far is good, and I’m not necessarily trying to get off, or get out of the car.”

So that sounds like Berman is not going to retire out of his own volition, and he also doesn’t seem particularly eager to move on from ESPN. That makes sense, as there aren’t many other places where he’d seemingly be a natural fit. His main role at this point is NFL host, and the other networks all have someone established in that role, and it’s not like there are SportsCenter equivalents for him to jump to either. Berman doesn’t necessarily sound enthused about a role change, but he sounds accepting of the idea, and “probably in the capacity that you’re seeing, not very much longer” certainly sounds like a change to more of an emeritus role is coming. We’ll still have to wait and see if that happens (keep in mind that in this era of budget cuts, ESPN’s being awfully careful how they spend their dollars) and what exactly that role would entail, but that seems like the most probable outcome at this point, and it may be the best one as well.

Who else will benefit from Amazon's TNF deal with the NFL?