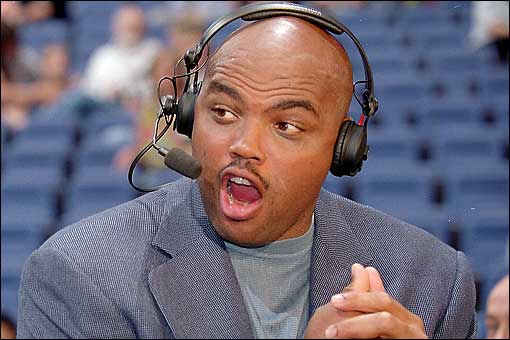 You know, sometimes Charles Barkley is like a breathe of fresh air in a sea full of hot take ships. And sometimes, he’s kinda The Worst.

While part of what makes Sir Charles so charming in his ability to surprise you with opinions and thoughts from all sides of the argument, sometimes he seems a little too aware that he’s “the guy who is supposed to say something.” That’s when some rather old school mentalities that don’t really do anyone any good tend to trickle in.

Thursday night, Barkley was holding down his spot at TNT’s Inside the NBA desk when the topic of the Golden State Warriors came up. Specifically, their style of play.

Charles Barkley explains why he doesn't like the way the Golden State Warriors play basketball pic.twitter.com/DaTud8Lwje

“Maybe I’m old school, but I’m never gonna like that little girly basketball where you have to outscore people. I’m biased against girl basketball. I love Geno Auriemma, one of my favorite coaches, I love women’s basketball, but I don’t want it in the NBA.”

First of all, Barkley waffles on whatever point he was trying to make by saying he’s biased against “girl basketball” but loves women’s basketball. For a guy who usually takes a side strongly, that seems like he knew he might have said the wrong thing.

Second of all, he’s factually-incorrect. The Warriors are a Top 10 defensive squad in the NBA and have defensive ratings of 101.4, 103.8, and 104.4 in the last three years. If Barkley doesn’t like teams who can’t play defense, he should look back at most of the teams he played for in the NBA, only two of which in his 16-year career had defensive ratings below 105.

The truth is, there are worse takes out there right now, but we’ve gotten to the point in society and sports where regarding something as “girly” in a negative way just isn’t going to fly anymore. Like so many things Barkley says, good and bad, the rest of his crew laughed it off because Charles Gonna Charles, but there are smarter ways to make your point without some kind of misguided “old school” mentality that belittles a large swath of your audience.