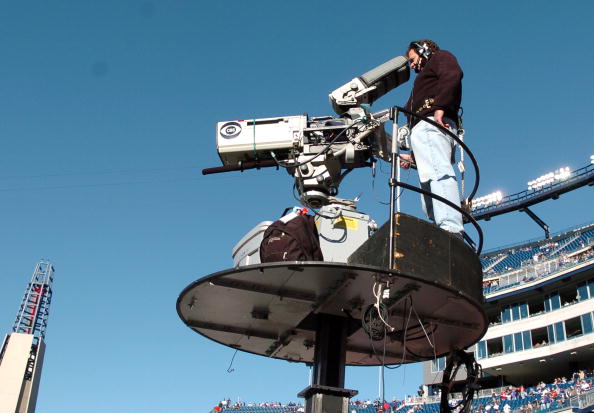 As CBS gets ready to air its 57th season of broadcasting the National Football League, it looks forward to airing another year of the American Football Conference on Sunday afternoons and its third season of Thursday Night Football. It’s held the rights to the AFC since 1998 and expanded its portfolio with Thursday Night Football in 2014. This year, it will continue to air TNF, but it will produce the first half of the schedule with NBC stepping in for the second half of the season.

With the Tiffany Network preparing for another year of the NFL, Sean McManus, the chairman of CBS Sports is hopeful for another successful season. Awful Announcing spoke with McManus, Greg Gumbel and sideline reporter Jamie Erdahl on their thoughts on the 2016 season and what they look forward to in the coming months:

On producing the Super Bowl 50 broadcast:

I think it met our expectations. We knew it was going to be the biggest and most important Super Bowl in history. I think we treated it that way from pregame to postgame. We won the Emmy Award for Most Ouststanding Broadcast against a lot of very stiff competition including the first Triple Crown in decades. I could not have been more proud or satisfied with the job we did. I think Phil (Simms), Jim (Nantz) and Tracy (Wolfson) had terrific games and that it met all of our expectations and I think it met all of the NFL’s expectations also.

On having the first half of Thursday Night Football:

I think it’s going to be hugely beneficial to us. We wanted the first part of the package. It’s a powerful and tremendous marketing opportunity for our primetime schedule. The games are almost guaranteed to be meaningful games at the beginning of the season. So we like our schedule, it’s the one that we wanted and we’re very pleased to have it for the next two years.

On Twitter streaming TNF and not cannibalizing the TV viewership:

All of our national advertising is going to air on the Twitter feed so that obviously going to be an added value to our advertisers and I do think they’re going to be promoting the games to a new and different audience that we are not reaching regularly. I think if someone has a television set, I still think they’re going to be watching on a TV, but there’s going to be a segment that doesn’t have access to cable or satellite television who may want to watch on their iPad or tablet or mobile device so I think it will add some viewers. I think the promotion will help and I think it will be one more way for more fans to experience NFL football which I think will be a positive for Thursday Night Football and for CBS.

The NFL product is live across the board and I still think the vast majority will watch on the big screen either on the NFL Network or CBS and much of the Twitter audience will be added. We’ll see when the numbers come out.

On the storylines he’s looking forward to seeing in Week 1:

In Week 1 (Cleveland at Philadelphia), this is an Eagles team for the first time without Chip Kelly in a couple of years and it’s a Cleveland team that has RGIII at quarterback. I’ve never met the young man. I’ve followed his career obviously, and I’m kind of anxious to see where his head is. You kind of like to see if there’s a new enthusiasm in Cleveland or not. It doesn’t take much to turn a team around as we saw with LeBron. I think they’re turning things around in Tampa. I think they’re turning things around in Jacksonville. I always think there’s something underneath the superficial headline in the National Football League.

On going to London for Week 4 (Indianapolis-Jacksonville):

Preparation for the game is the same. I think you have to care for yourself a little more. Jet lag can be a factor if you let it. I did a game over there with Dan Dierdorf several years ago and it was the second time I had been in Wembley Stadium. Years ago, I did a preseason game with Terry Bradshaw and it was a horrible game (ended in a 6-6 tie). I think it’s interesting to visit places that you haven’t been to. I think it’s presenting something from a different location.

On this being her second season on the NFL on CBS and what she looks forward to:

I think I’m most looking forward to seeing how the weekends play out as you’re getting ready for a game. Having Greg and Trent last year was the easiest thing I’ve transitioned into as I was so lucky to have them there. But it was so different coming into from college football because every school and every conference handles meetings so differently, they handle their athletes differently. But in the NFL, they’re such pros across the board that every weekend is cookie cutter, but in a very good way.

Much like the athletes, I try to prepare the same way. I try to land at the same time, go to the meetings, Trent, Greg and I and our producer and director always work hard together. We spend a lot of time driving around at each different city.

On the differences going from college football to the NFL:

The intensity on game days from college to the NFL. In college football, I was switching between the Mountain West and the SEC and of course, the SEC is beast in within itself, but you never knew what you were going to get depending on which college team was playing or depending on the travel. But the NFL to me is the greatest game you’re going to be at every Sunday afternoon. People show up and people are watching and it’s just the atmosphere is just gold every Sunday.

The 57th season of the NFL on CBS begins this Sunday with regional action with four games in the 1 p.m. ET window headlined by Cincinnati at the New York Jets and Cleveland at Philadelphia and Miami at Seattle in the 4:05 p.m. ET window. The season premiere of Thursday Night Football on CBS begins on September 15 with the New York Jets at Buffalo.