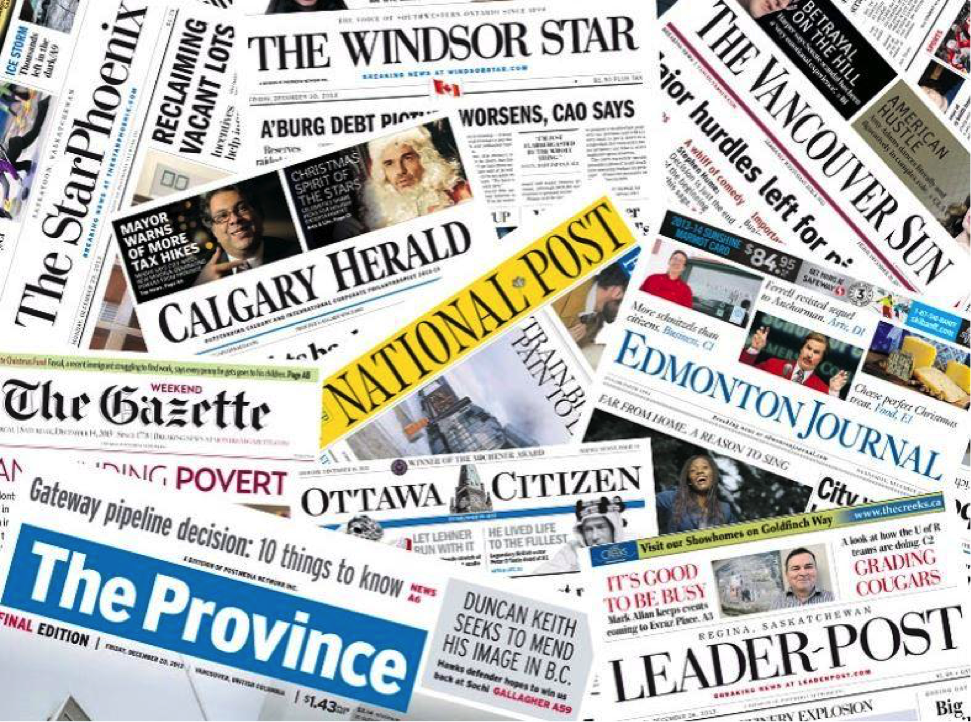 Newspaper sports coverage in Canada is about to get a lot more centralized, with several cities apparently set to lose different takes from different newspapers. That’s thanks to changes at the country’s largest daily newspaper chain, Postmedia, which was formed last April when Postmedia bought Quebecor/Sun Media’s English-language news properties, a move permitted by the federal Competition Bureau despite it creating the same ownership for both daily papers in several cities. Some of the implications of the consolidation to come under the deal were really shown Tuesday when Postmedia announced the cuts of up to 90 jobs nationwide and the merging of newsroom operations in Vancouver, Calgary, Edmonton and Ottawa.

Consolidation is not just a Canadian issue, as we’re seeing this in the U.S. too, such as with the October merger of the Philadelphia Inquirer and Philadelphia Daily News staffs. It’s the scope of this Canadian consolidation that really stands out, though, as this will create essentially one paper (two papers will still be published, but with a shared staff) in four major cities across Canada.

This is going to have a massive effect on Canadian sports coverage, as Postmedia “is also creating a national sportswriting team to be led by a single editor, Bev Wake.” In all four of these cities, both papers have traditionally had beat reporters (sometimes more than one) for each team, plus their own roster of columnists to give unique takes on the local teams. With everything rolled into one national sports team, don’t expect to see many diverging perspectives or different focuses.

The National Post (the chain’s sole national daily) looks particularly hard-hit on the sports side. Reporters Eric Koreen and David Alter and web producer Kaitlyn McGrath all tweeted they’re out as part of a reported merger of their sports desk with the Sun Media one:

As you will no doubt hear soon, Postmedia is making cuts today. I am one of them. It is a tremendous bummer.

Count me as one of the ones affected by the cuts. It was a fun 4 months and I learned a lot. https://t.co/pKftFAQ7B4

Sad to say I'm also part of the Postmedia cuts today. So grateful for the opportunity @npsport gave me

Some sports journalists in other cities have also announced that they’ve been laid off as part of the merging of those newsrooms:

I'm no longer a part of the Ottawa Sun. Devastated doesn't begin to describe it. Thanks for the run.

So, after 34 years covering sports in Calgary, it's over. Am I sad? No. Bitter? Yes. Very. Condolences to all others affected by the carnage

That's ballgame, Tweeps. From UPC to CP to Ottawa Citizen to Edmonton Journal — 35 fabulous years. Thanks to all. Play on.

Here’s part of the memo from Postmedia CEO Paul Godfrey (the 76-year-old former Blue Jays’ president and CEO, who’s been running the chain since 2010 after the American hedge funds that held predecessor CanWest’s debt took over following its bankruptcy, and who pocketed $1.76 million in salary last year) on the upcoming changes:

We have announced a cost cutting program aimed at finding at least $80 million in savings before the end of fiscal 2017. That significant of an initiative requires looking at everything in a new way and considering approaches we have never taken – truly nothing is off the table. We know that we can’t make meaningful headway against our challenges without great effort.

Since the acquisition of the Sun Media brands, we have been working to move our teams together in order to leverage strengths and also to find synergies and savings. We have made progress across our Sales, Marketing, HR, Finance, IT and other administrative functions. The next step is our newsrooms.

Today, at townhall meetings in our larger metro and Sun newsrooms, we are announcing some significant changes across our operations but specifically, in our cities with two brands: Ottawa, Calgary, Edmonton and Vancouver. Let me be clear on one very important point – we will continue to operate separate brands in each of these markets. What is changing is how we produce these products.

Effective immediately, in Ottawa, Calgary, Edmonton and Vancouver, we will be sharing most of our newsroom resources. Each city will have one newsroom. Our Calgary brands: Calgary Sun and the Calgary Herald will share one Editor – Jose Rodriguez, our Edmonton brands: Edmonton Sun and the Edmonton Journal will share one Editor – Lorne Motley. In Ottawa, the search is underway for a new Editor who will be responsible for both the Ottawa Citizen and the Ottawa Sun. In Vancouver, our senior editorial team, under the leadership of Rob McLaughlin, will also represent one newsroom with two brands, The Vancouver Sun and The Province.

This goes well beyond sports, but local sports coverage across Canada seems likely to be particularly hard-hit here. For one, some tremendous people have already been cut, and there are more cuts coming; buyouts are going to be introduced in the Vancouver and Ottawa newsrooms as well. Beyond that, though, much of the excellent coverage of local hockey, CFL, soccer and other teams across Canada has come from there being two distinct papers with two distinct sets of reporters and columnists; they frequently find different angles, bring different perspectives and challenge each other to do better. Rolling that all into one national team is certainly going to lead to a downturn in the numbers of pieces written, and it seems likely to decrease the quality of coverage of each team as well.

This also seems likely to reduce the amount of writers sent to big events such as the Olympics, the Stanley Cup finals, the Super Bowl and the Grey Cup. With operations in these cities being consolidated and newsrooms working on smaller budgets, expect less on-site coverage of the key events. Of course, Postmedia will still cover them in some fashion, as will the big papers that aren’t part of this chain (The Globe and Mail and The Toronto Star), but Canadians will likely wind up with less on-location coverage of key sports events as a result of this deal.

While the changing sports landscape in Canada may not directly impact U.S. readers, it should be kept in mind as a case of what can happen from newspaper consolidation, and what can happen despite apparent promises to the contrary. Consider what Godfrey said about keeping both papers in cities when the Competition Board approved Postmedia’s purchase of Sun Media last year:

Paul Godfrey, president and chief executive officer of Postmedia, insisted at the time that the Sun newspapers in urban markets such as Toronto, Calgary, Winnipeg, Edmonton and Ottawa would continue to run autonomously.

He repeated that pledge while speaking to reporters on Wednesday at the National Post offices in Toronto.

“Our intent is to operate them on a going forward basis,” Godfrey said. “We haven’t looked at the total financial basis of each community newspaper but we’re in this business. We have no plans to immediately say we are going to close anything.”

So, how’s that working out? According to Godfrey’s memo, those individual “papers” will continue, but the content for them will be created by one newsroom in each city and rewritten for the right “brand and platform”:

That’s very similar to what we’ve seen in Philadelphia:

The Philadelphia Inquirer and its sister paper, the Philadelphia Daily News, will merge newsrooms but continue to put out two separate newspapers, leading to an unknown number of job cuts….

Publisher Terrance Egger said the digital operation, Philly.com, would also be part of the consolidation.

He told employees the move to a single newsroom will save Philadelphia Media Network $5 million to $6 million.

“It’s more efficient. Rather than have a reporter from each of the three entities to cover an event, we now can send one,” he said.

Only sending one reporter to an event may sound great from a cost standpoint, but it means that different perspectives, different angles, and in-depth coverage are lost. That seems likely to happen with a lot of Canadian sports (and news) coverage in the wake of this consolidation. But don’t worry, Godfrey says everything is awesome and will continue as normal despite these cuts!

We will continue to operate our broadsheet newspapers and our tabloid newspapers in their current formats and with the features and focus that our readers have come to expect from their favourite news brands.

We’ll see how those “news brands” are perceived going forward, but this is certainly a blow for those who appreciate separate papers’ different coverage of local news and sports. There will be things to watch on the editorial freedom front, too, as the fired editors in Edmonton were some of the only ones to criticize Postmedia’s nationally-forced election endorsement, and there have been plenty of criticisms of Godfrey’s strategy of trying to keep advertisers happy at the cost of journalistic critiques on other fronts.

This decision should also be seen as a case in point of what can happen out of big newspaper mergers, regardless of if they’re approved by competition authorities or not. Ahead of that merger, Postmedia promised to maintain two brands; while they may be sticking to the letter of that promise, they’re not sticking to the spirit of it, especially on the sports side. That’s a loss for sports fans across Canada, and if other U.S. newspapers follow suit with this kind of consolidation, it will be a loss for American fans as well.