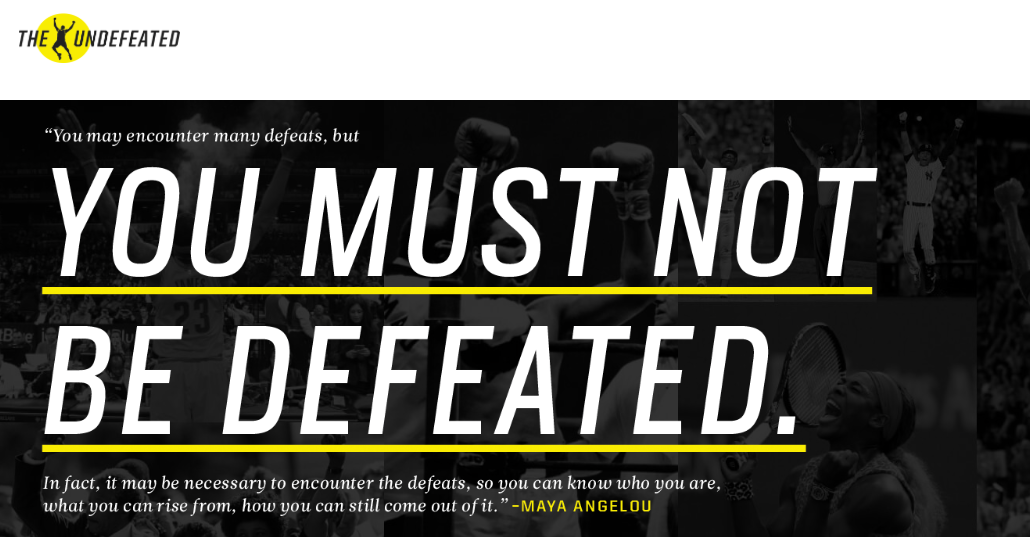 What if I told you that there was an upcoming site dedicated to covering the interactions of sport, culture and race, led by The Washington Post‘s former managing editor, stocked with well-established journalistic talent, and backed by one of sports’ most powerful companies? That’s one thing, but what if I then told you it’s called The Undefeated?

If you pay attention to media coverage, that name’s likely going to create a more negative impression than just the site’s roster (further supplemented with four hires last week) or backing would. The question is if The Undefeated can find a way to overcome that reputation, or if its checkered past history will prove a drag on its future.

The Undefeated has become a punching bag thanks to its 2013 inception as Jason Whitlock’s “Black Grantland” following his return to ESPN, Deadspin’s revelations about Whitlock’s management practices, Whitlock’s demotion and departure, his war of words with Deadspin’s Greg Howard, and the site still not having a firm launch date almost three years after work on it began.

Much of that criticism is fair; the amounts of time and money ESPN has sunk into this for next to no return to date are incredible, especially when you consider that they shuttered a much-more-proven site in Grantland and have laid off up to 350 other staffers thanks to budget cuts stemming from rising rights fees and declining subscriber fees. Also, the longer The Undefeated goes until launch, the more that criticism will be amplified.

However, a more charitable way to view the site would be to start its timeline with Whitlock’s June 2015 demotion, or even with Kevin Merida’s October 2015 hire as the new editor-in-chief. It seems likely the site’s going down a very different path now than it was under Whitlock and his “playbook,” and that they’ve probably substantially revised how the site will operate. There unquestionably will have been plenty of work needed to sort that out after Whitlock’s exit and Merida’s entrance.

Some criticism for the delay is still fair, as The Undefeated’s homepage hasn’t linked to anything new by their writers since Nov. 20 and still only has 21 links overall. This might be the lowest-producing professional site out there, especially given its substantial staff. It’s also unclear why it’s taking so long to launch this, given the numbers and experience they have onboard, plus the ESPN resources at their disposal. Still, it’s worth keeping in mind that Merida’s relatively new to this project, and that the site under him is also relatively new.

The roster Merida is building also looks impressive. Two of the most recent hires come directly from the Post, Michael Fletcher and Soraya Nadia McDonald. A third, Kelley Carter, has a strong reputation in entertainment and music journalism, including work for BuzzFeed, USA Today, Ebony, Vibe and even ESPN.com’s old Page 2. The fourth is Jason Reid, a former Post sports columnist now at ESPN, who has done some solid NFL coverage over the years. Add that to the considerable talent the site already has under contract, including managing editor Raina Kelley and writers like Mike Wise, Ryan Cortes and Jesse Washington, plus reports that they’re targeting other Post staffers, and this could well turn into a valuable site.

The challenge for The Undefeated is going to be escaping the baggage that comes with its Whitlock-led era and its long delays, though. Years after its inception, the site has a worse reputation than a brand-new startup would, and that’s not going to be particularly easy to overcome. If it produces good journalism, though, the site may be able to put the past behind it and win recognition for what it is now rather than the disaster it was under Whitlock.

That’s a big task, but Merida has an extensive staff and plenty of resources, plus ESPN’s corporate backing. The Undefeated’s title, taken from a Maya Angelou quote, may prove apt indeed; it’s encountered the defeats and now is figuring out what it is. We’ll see what it can rise from.