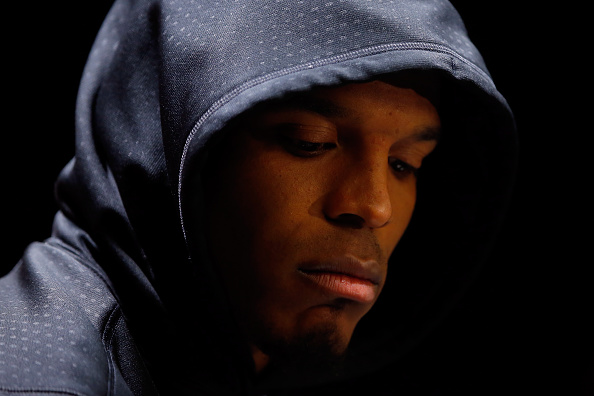 During a particular episode of The Simpsons, Grandpa Simpson is shown in flashback watching the introductions to Super Bowl III between the Baltimore Colts and New York Jets. Introduced first is Jets quarterback Joe Namath, with his billowy hair and long sideburns.

“Look at them sideburns! He looks like a girl,” Abe Simpson exclaims.

We immediately cut to an image of Colts quarterback Johnny Unitas, with a 50’s flat-top and emotionless stare.

“Now, Johnny Unitas, there’s a haircut you could set your watch to.”

There was a moment during the Armed Forces Chorus’s performance of ‘America the Beautiful’ before Super Bowl 50 that might as well have been a modern reenactment of that scene.

As the chorus starts performing, the camera cuts away to show a close-up of Carolina Panthers quarterback Cam Newton. He seems distracted, digging at an itch under his pads and swaying back and forth. He’s got a towel draped over his head. He’s chewing gum.

You could just imagine what certain people were saying in living rooms and bars around the country. “How disrespectful!” “Show some class!” “Pay attention.”

He looks like the kind of quarterback you can set your watch to.

It’s entirely possible that most people had already made their mind up about who Cam Newton is and who Peyton Manning is in that moment, even if the variables involved make it impossible to know just how much either of them were actually paying attention and if that even really matters to begin with. You could even make a case they made up their minds long before that. The results of Super Bowl 50 and the ensuing press conference where Newton got up and left abruptly only confirmed what people already knew. Or at least think they know.

We can piece together now that Newton was reacting less to the reporters asking him probing questions and more to Broncos DB Chris Harris trashing him a curtain over. He could clearly hear Harris saying, “We knew he couldn’t throw on us” and “Did y’all see him dance today? He didn’t dance.”

THIS is why Cam walked out (listen to what's being said in the background). pic.twitter.com/6LdLFwv8tj

Does that “excuse” Newton’s action, if they even require excuse? Perhaps that’s a better debate to have. But many in the media were pretty uninterested in that debate in the moment. Newton’s actions were an affront to them and the purity of the press conference, as it were. It was everything many of them had secretly been hoping for, a chance to scold the petulant child who spent a season dabbing on them and remind him of his place.

Newton failed to show leadership. He made himself the center of attention. He revealed himself to be a selfish front-runner (which doesn’t make sense but sure). He was pouty. He embarrassed himself. He was told “you can’t do that.” Instead he was hiding behind his hoodie.

For most of those pieces, their minds were probably made up a long time ago about Newton, regardless of the context of the moment or how many other athletes have expressed frustration or disappointment after losing the biggest game of their lives.

Take, for example, Fox Sports’ Chris Chase, who wrote one of Monday’s takedown articles about the “childish, sulking, petulant” antics of Newton during his press conference performance. Then consider this piece by Chase from six years ago after Peyton Manning left the field without shaking hands following a Super Bowl loss. He doesn’t describe Manning as childish, sulking or petulant. Instead, he praises him.

Walking off the field without congratulating Drew Brees may go against our misguided notion of what sportsmanship should be, but it wasn’t at all disrespectful or bitter. It shows how much Peyton Manning wanted to win the game. And who can argue about that?

It took just about three minutes — three childish, sulking, petulant minutes — for Cam Newton to completely undo all the goodwill he’d created this NFL season, giving ammunition to his army of critics and leaving his fans with little to say in way of a defense after storming out of his postgame press conference following the Carolina Panthers’ Super Bowl 50 loss.

Throw in the fact that Newton was one of the first people to run over to Manning and congratulate him on winning the Super Bowl and it all leaves you with some very hard connotations to accept about why Cam is “petulant” but Peyton is a “winner.”

There were a lot of elephants in the room last night. For Peyton Manning, it’s the controversy circling a shipment of HGH delivered to his house. For certain reasons, that brewing storm was completely forgotten on Sunday and no one questioned Manning’s bonafides as he posed for the adoring cameras.

For Cam Newton, it is and probably always will be his race. And while most people who let it affect their thoughts on Newton keep it more under wraps than Romanowski, you can’t help but still feel its out there, subconsciously affecting the way sportswriters and others cover him.

Former NFL player Bill Romanowski, perhaps stripping away the disdain for Newton to its essence, told him in a since-deleted tweet that “The world doesn’t revolve around you, boy!”

Bill Romanowski on how he'd stop Cam: I would hit him as hard as possible then try to choke him under the pile.https://t.co/nIuvWGVc2i

What makes it so depressing that so many sportswriters and personalities were so quick to jump on Newton and chastise him for his very human emotion is that is seems to confirm that despite working in a business where they cover human beings for a living, they don’t actually understand human beings. A person’s exterior reaction to a situation is often at odds with how they’re actually feeling. Bullies live in fear. Comedians are often suffering from depression. Successful business people can make terrible friends & family.

It’s also fair to make note that anyone unabashedly defending Newton has the same entrenchment problems to deal with. Just as there’s a way to say Cam’s reaction wasn’t your cup of tea but also appreciate the circumstances, there’s a way to defend Cam’s actions without completely absolving him of all sin. Newton is, above all else, a complex human being. You do yourself a disservice by not treating him as such regardless of which side of the aisle you’re on. Why there has to be an aisle in the first place is a product of our increasingly polarized culture that seems to be more and more prolific in sports.

What you see if almost never what you get, if you’re willing to do some digging. Of course, most of the people who think Newton is selfish and lacks leadership don’t want to any digging. That requires work and effort. That requires personal discipline and self-leadership and conviction. Instead, they take the easy way out, spew a hot take and move on to the next low-hanging fruit.

Come to think of it, they might say they’re the Cam Newtons of sportswriters.