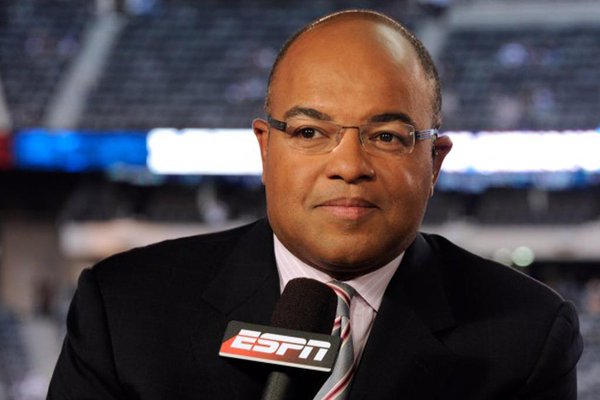 Over the past few weeks, whispers have been growing louder and louder across the sports media industry that NBC was going to make a play for Tirico.  Ryan Glasspiegel mentioned that NBC was expected to make an offer for Tirico over at The Big Lead last week.  Earlier this week AA had heard through a source that Tirico’s uncertain future was a major talking point behind the scenes at Augusta National at the beginning of April.

As it turns out, there’s much, much, more to the story than that.  In fact, Tirico may be trading in the four letters for the peacock.

John Ourand of Sports Business Journal reports that Tirico is on his way to NBC:

Mike Tirico, one of ESPN’s best known on-air voices, is leaving the network for NBC, according to several sources. Tirico has been a mainstay with ESPN since ’91, and given his many roles at ESPN, he will be an incredibly difficult talent to replace. Tirico has been ESPN’s on-air face of the NFL, serving as the lead play-by-play announcer for “MNF” since ’06. A source says that Sean McDonough, who recently renewed his deal with ESPN, is a leading candidate to replace Tirico on “MNF,” though no decision has been made yet. NBC would not comment on the move, with a spokesperson saying that the net does not comment on people under contract with another outlet.

Ironically enough, this may be the biggest move in sportscasting since another Disney employee made the jump to NBC with Al Michaels doing so in 2006.  (There’s no word yet on this point what the current state of Oswald the Lucky Rabbit is, though.)

Tirico jumping ship is a stunner as he has been more or less an ESPN lifer, starting at the network in the early 1990’s as a SportsCenter anchor.  He then moved on to be the preeminent play by play voice at the network calling major championship golf and tennis, the NBA Playoffs, college basketball and football, and most notably the network’s Monday Night Football package since 2006.

The new Thursday Night Football package makes sense for Tirico as an onboarding spot with NBC this fall.  And now that the network has rights to both the Ryder Cup and the British Open, you can expect that Tirico will lead that coverage as well alongside fellow addition David Feherty.

Beyond that, it’s clear that Tirico is now in great shape to be the successor to one or both of Al Michaels on Sunday Night Football or Bob Costas as primetime host of the Olympics.  Although Tirico has seemingly been around forever, he’s only 49 years old (!!!) and still has a good 20 years ahead of him or more in the television industry.

There are so many dominoes to fall from this single move…

– Who calls Monday Night Football?  If it is Sean McDonough, how will he work together with Jon Gruden?

– What happens to NBC’s golf coverage and most notably Dan Hicks?

– Who fills Tirico’s shoes at ESPN in places like Big Ten basketball with Dan Dakich and the NBA with Hubie Brown?

This is a massive hire for NBC and a massive loss for ESPN and the fallout will be felt for many years to come.