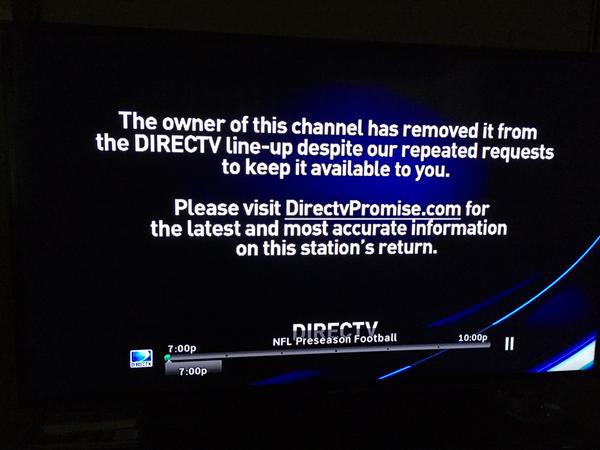 Boston area DirecTV subscribers noticed something was different this weekend when they tuned to WHDH, the city’s NBC affiliate. The channel was pulled after the station’s owner and the satellite provider could not come to an agreement on the per subscriber price. And this dispute doesn’t affect just the NBC affiliate in the market, but also the co-owned CW station, WLVI. In addition, Miami viewers are affected as WSVN which is also under the same umbrella as Boston’s WHDH and WLVI, Sunbeam Television, is negotiating with DirecTV.

The move came as the Open Championship was underway as this dispute continues, there’s the Olympics that are on the horizon if an agreement can’t be reached. If that happens, viewers will have to resort to alternative methods to watch NBC’s coverage including through the NBC Sports app or connecting the old school rabbit ears to their televisions.

This isn’t the first time that the WHDH-WLVI combo was pulled in Boston. Back in 2012, Sunbeam and DirecTV had a similar standoff that went two weeks and ended just before NBC’s airing of the Super Bowl.

DirecTV is putting the blame solely at the feet of Sunbeam. In a statement to the Boston Globe, a spokesperson said this is all on Sunbeam:

“Sunbeam is demanding a significant increase in their current fees just to let these same families keep watching shows that remain available for free over-the-air on channels 7 and 56 and often online at NBC.com and CWTV.com.”

“Sunbeam has temporarily suspended its stations from our customers several times before, so we appreciate their patience as we work to resolve this matter quickly, reasonably, and with the least possible inconvenience.”

Sunbeam’s owner, Ed Ansin is suffering from a double whammy here. Not only are his stations off DirecTV, WHDH is going to be losing its NBC affiliation come January as the Peacock will be moving to an owned-and-operated station which is currently carrying Telemundo. Ansin has tried to sue to keep NBC, but the courts have tossed his lawsuits out.

In the meantime, viewers are caught in the middle and with the history between Sunbeam and DirecTV one expects that this could be an extended blackout just like in 2012.

Making matters worse, WHDH may also go off Dish Network this week if their neogitations don’t bring an agreement.