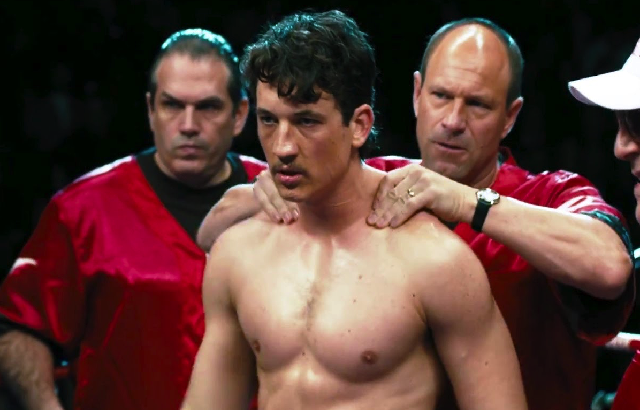 Boxer Vinny Pazienza (now Vinny Paz) often didn’t seem like the most humble, reasonable guy throughout his 20-year professional career. Actor Miles Teller doesn’t come across as a terribly likable fellow in interviews and features. So does that make Bleed for This, a biopic about Pazienza an unenjoyable movie to watch?

If that’s the baggage you bring into this movie as a viewer, it’s possible that could affect your opinion. Though if you have those sorts of feeling about Pazienza or Teller, it’s likely you won’t see this film anyway. If that’s the case, you’ll deprive yourself from a compelling movie about the escape that boxing can provide for someone in the working class, how a community can rally around a local kid who made good, some insight into why anyone would put himself through such physical rigors and perhaps what sort of personality is conducive to success in the sport.

Bleed for This begins at a notable point in Pazienza’s career, which also entertainingly conveys how far he pushed himself and perhaps some poor guidance he received early on as a professional fighter. As seen in the film’s trailer, Pazienza was trying to shed weight right up until the last minute before weighing in for his first title fight, a 1988 bout with WBC World Junior Welterweight champion Roger Mayweather. While he did make the 140-pound limit, Pazienza spent the next 24 hours eating (basically whatever he wanted) to get his strength back, while cruising the casinos with his girlfriend at the time.

As could be expected, Pazienza wasn’t at his sharpest for the fight. His lack of movement, in particular, made him a stationery target for Mayweather to punch. Frustrated by his fighter’s lack of discipline and refusal to make necessary improvements, Pazienza’s trainer, Lou Duva (Ted Levine), tells the press that he’s not sure if Pazienza will box again. That’s news to Pazienza and his father Angelo (Ciaran Hinds), who not only fully intend to continue his boxing career, but can’t afford not to fight.

But Duva and his promoter son Dan don’t want to work with a boxer who keeps losing and won’t get better, and thus is difficult to sell for more fights. To wash his hands of Pazienza, and perhaps a hope that a new voice will get through, Duva sends him to train with Kevin Rooney (Aaron Eckhart), best known for training Mike Tyson early in his career. As it turns out, sending Pazienza to Rooney is also an attempt to revitalize the trainer, who’s spiraled into obscurity and heavy drinking after Tyson broke ties with him.

Initially, Rooney sees Pazienza as a lost cause and doesn’t think he’s worth the effort. But Pazienza’s persistence and stubbornness intrigue the trainer. While he has many bad habits to break (particularly when it comes to moving his head and not giving the opponent an easy target), Rooney is convinced there’s enough raw material that he can work with to make a successful fighter. And frankly, Rooney himself needs a project to give him some purpose again.

This part of the film is typical boxing training montage stuff, as Pazienza slowly develops the technique and skills that will help him improve in the ring. The key breakthrough Rooney realizes while watching Pazienza is that added weight makes him a more powerful fighter. Pazienza was miscast as a junior welterweight, probably by his overzealous father, and Rooney encourages him to move up two weight classes. It’s a drastic move, but Pazienza could benefit from the shake-up.

Maybe it’s not fresh, but Teller and Eckhart make it entertaining with their performances. Pazienza and Rooney need each other to revive flagging careers. Their headstrong personalities cause friction, but when they mesh, that energy creates some exciting potential. As a result, Duva puts Pazienza in a fight with World Junior Middleweight champion Gilbert Dele. Rooney worries that Pazienza will be severely overmatched, while Duva sees an easy title defense.

You can probably guess where this part of the story goes, regardless of whether or not you’re familiar with Pazienza’s career. The added weight and power is better suited to Pazienza’s brawler tendencies, while Rooney’s emphasis on movement and better defending himself makes him a more formidable fighter who’s less of an easy target. Pazienza has become the fighter he always thought he could be and his career once again looks promising.

It’s at this point where Pazienza’s story veers from the typical boxing movie narrative and becomes distinct enough to deserve a movie. Following an unexpected title victory, Pazienza is involved in a serious automobile accident which results in his neck being broken. (In terms of how the accident scene is shot, director Ben Younger deserves some credit here for not falling into cliches that we’ve seen many times in recent movies and TV shows.)

Requiring a halo brace to keep his neck and spine in place, Pazienza is told he may never walk again. Yet the fighter fully intends to box again, despite the enormous physical risks. His family and friends dismiss the talk about returning to the ring, realizing Pazienza’s bravado. Eventually, with a little bit of real talk, the reality of the situation will occur to him. Yet if there’s one prevailing theme in this movie, it’s that Pazienza is not afraid of pain or suffering. He actually thinks it’s necessary to make him a successful fighter.

This is what sets Bleed for This apart from other boxing movies. The fighter in question isn’t trying to make a comeback because his skills have eroded, age has set in, or he became complacent after success. He’s fighting against his own body, putting his life at risk in the process. Even if you’re familiar with Pazienza’s story and know how this stage of his career turned out, it’s harrowing to watch as he tries to lift weights and train when such effort could result in paralysis.

Teller does excellent work in selling the physical risks, which would almost be comical if the potential consequences weren’t so dire. His Pazienza may be brash and cocky, but his family keeps him grounded because they have been so loving and supportive. Eckhart is also very good as Rooney, who doesn’t want to be responsible for Pazienza hurting himself, perhaps fatally. Yet he eventually welcomes the new challenge, while also providing someone who’s become a good friend (and welcomed him into his family) with hope. Again, it’s about finding a sense of purpose.

Shooting boxing movies can be a difficult endeavor for a director. There are some very basic things that need to be covered in ring action. But does a director try to be innovative, like Martin Scorsese did with Raging Bull and Ryan Coogler with Creed, or is there an attempt to ramp up the action and drama to the point that the boxing no longer resembles what would actually be seen in the ring, as seen in the Rocky films and the recent disappointment Hands of Stone?

Younger and cinematographer Larkin Seiple find the right balance, conveying the action coherently and realistically. This looks like actual boxing, even when Pazienza shows off in the ring. (One curious decision is to use actual footage of Pazienza when his fights are shown on TV or in quick clips. Yet that footage is shown quickly enough that the differences between the real-life figure and actor aren’t glaringly obvious.) The script by Younger, along with writers Angelo Pizzo and Pippa Bianco, does take some dramatic license with the timeline of events, but that’s to be expected with a film like this.

Bleed for This is a pleasant surprise. On the surface, it may look like a boxing film you’ve seen many times before. And maybe Vinny Pazienza doesn’t appear to be a compelling enough figure for a movie. But his story is one worth telling, and Teller’s performance sells it. The role is one of the best he’s had, allowing him to show range that can handle drama, comedy and action. This movie deserves far more attention than it will likely get in theaters.

No one could have elevated a meaningless blowout preseason game, but Buck and Aikman would have made it more watchable.

No one could have elevated a meaningless blowout preseason game, but Buck and Aikman would have made it more watchable.