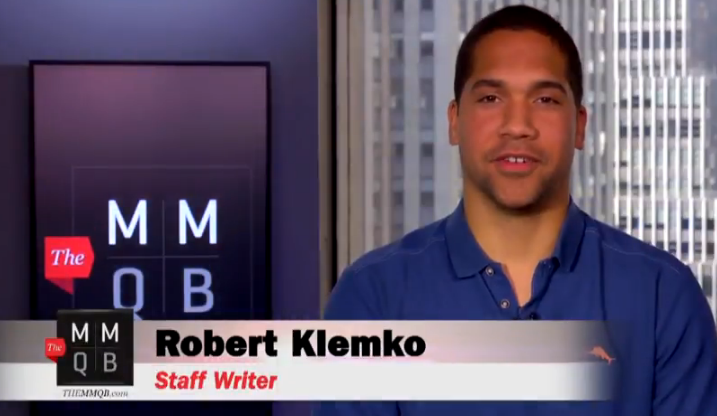 On Sunday, Robert Klemko was in Western New York to cover the San Francisco 49ers-Buffalo Bills game. And he posted a tweet that immediately became the Twitter outrage of the day.

Yes, a woman tackled a dummy with an afro and a number 7 jersey that apparently depicted 49ers QB Colin Kaepernick. That video garnered plenty of reaction and if you notice it received almost 1,800 retweets and over 1,200 likes. However, if you notice, there were no yells of “tackle the Muslim,” Klemko says the video was taken after the chants were made:

@JeffOutLoud @101cmb1502 guys said it before I started video. Literally my job to report what people say, whether I have video or not.

The person in the video has come forward to counter Klemko’s claims that she tackled the dummy as a result of the yelling. Alexis Dent has written an article in Medium identifying herself as the “young lady” who did the tackling and she said no one had said anything close to “tackle the Muslim” and requested a retraction. However, Klemko has refused and it has led to a “he said/she said” situation.

Dent writes that Snapchat videos “from the minutes and moments leading up to my tackle, and not once does someone yell anything of that nature. I offered to show you them, but you didn’t respond. Guess it’s not fun being called out, eh?”

Dent said she challenged Klemko about who yelled “tackle the Muslim” and he responded “a random guy in a blue hat. Very generic and convenient, considering our colors are blue and red,” while not claiming that she or any of her friends did.

Yes, I get it. You admitted that I wasn’t associated with the comments, but by leaving the tweets up and continuing to defame my character, you implied that I was, in fact, associated. Because of you saying I tackled the dummy in response to a racist statement, I was called racial slurs myself. People accused me of listening to my “master” and “siding with white men who hate me.” But that didn’t bother me, because the overwhelming majority of responses to the video were in support of me and the fact that there is no such record of anyone making that statement.

Here are a couple of points Dent makes in countering Klemko:

Dent in closing even throws a shot at Klemko for getting into a fight with a cab driver in Ferguson, MO two years ago:

So in conclusion:
Robert, you are a jerk, a scumbag, and a lousy charlatan of a “journalist.” You won’t fully retract your statements? Fine. But don’t come to a Bills tailgate again, or a football dummy won’t be the only thing getting tackled.

Oh wait, I don’t commit assault. Guess that makes one of us.

Well, that was a burn.

For his part, MMQB editor Peter King says he stands by Klemko’s account of the incident:

Absolutely. I stand behind @RobertKlemko wholeheartedly, including what he witnessed in Buffalo Sunday. https://t.co/Gi2rjce3BE

I did last night. Said I support @RobertKlemko wholeheartedly, including what he witnessed Sunday. Nothing’s changed. https://t.co/vmhBVXj7Mb

So Klemko and MMQB are standing by the account and video. Dent and other Buffalo fans say otherwise. Without the actual video showing someone yelling “tackle the Muslim,” the gray area will still remain.