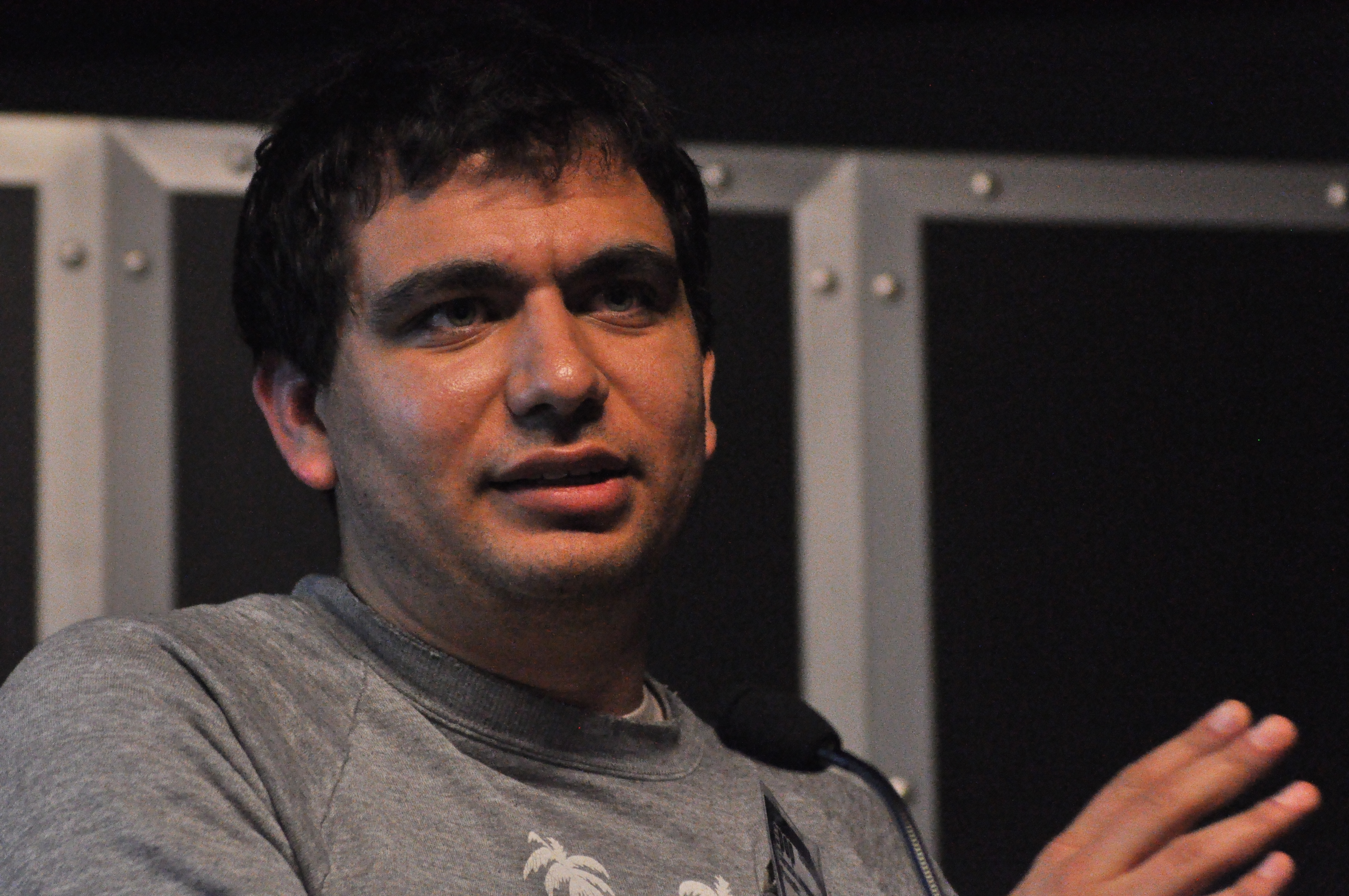 Free Darko founder Nathaniel Friedman, who goes by Bethlehem Shoals online, currently writes for GQ, and has been involved in everything from AOL FanHouse to Bleacher Report to The Classical, stirred up a pot of controversy with his Twitter comments Monday night. During Patricia Smith’s Republican National Convention speech that saw her blame Hillary Clinton for her son Sean’s death in Benghazi in 2012, Shoals tweeted (a tweet he’s since deleted, but Newsbusters preserved it in a screencap) that he “would like to beat her to death”:

That kicked off a firestorm of outrage, but Shoals initially defended his position: 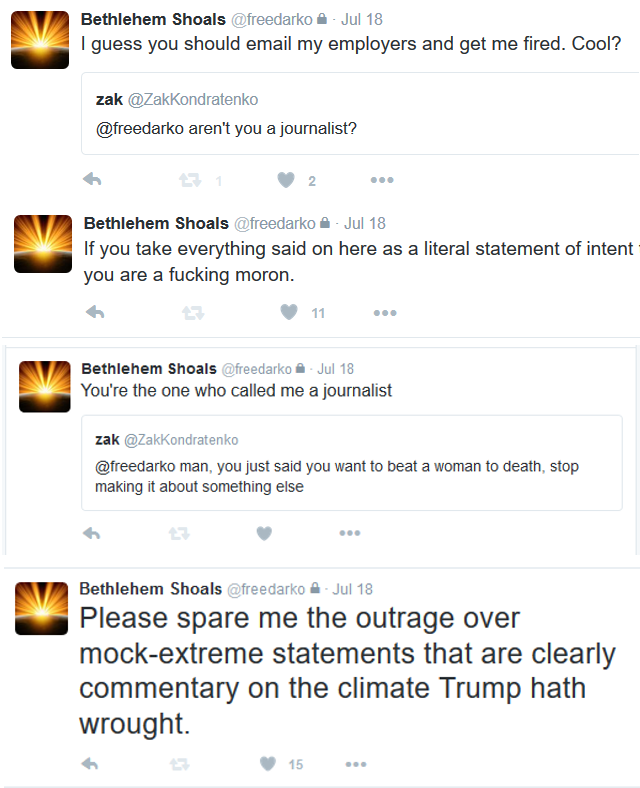 He then apologized, but with reservations at first: 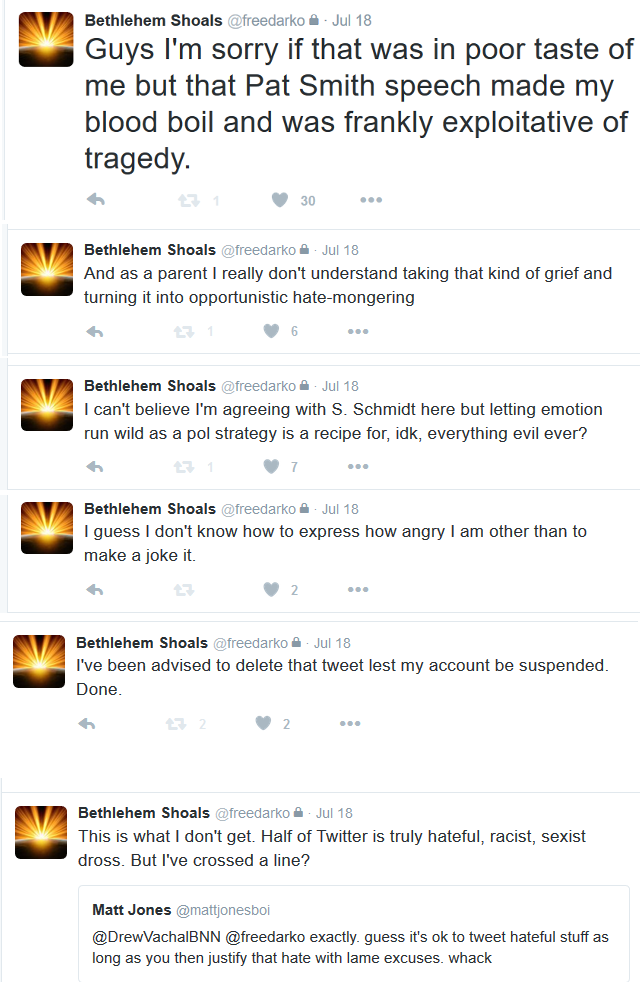 Shoals then said he didn’t fear suspension and compared his comments to those made by Trump and other Republican speakers:

On Tuesday, Shoals offered another apology, but still with reservations:

He later published a more complete formal apology on Medium:

Last night, when Pat Smith was speaking onstage at the Republication National Convention, I tweeted that “no matter how many children she’s lost, I’d like to beat her to death.” That’s what I said, and I accept full responsibility for my actions and their consequences.

Why did I do it? It certainly wasn’t intended as a literal threat on a woman’s life. If anything, it was an extremely ill-advised attempt at satirizing the overall climate of the RNC. But with that kind of hateful language, an explanation just turns into rationalization.

I certainly didn’t help the situation by getting defensive and suggesting that Twitter, vile as it can be, is already a hotbed for this kind of discourse, or by arguing that my track record and reputation as a writer could provide any exculpatory context. Because what matters is that I said it. And I wish I could take it back.

Under no circumstances is it okay to invoke violence against women. As outraged as I was by parts of Pat Smith’s speech, to use this kind of language as a means of expressing that feeling was completely out of bounds. I also completely understand how, regardless of my intent, it was extremely triggering for a lot of people. And for that I am genuinely sorry.

I’ve also heard a lot this morning from people on the other side of the political spectrum. While I may disagree with these people on a number of matters, I know that what I wrote is utterly indefensible. The last thing this country needs is statements that make the climate even more toxic and divisive.

I generally believe the world to be a messy, confusing place. But in this case, there’s no ambiguity about it: I fucked up and should have just owned that. I’ve learned my lesson and at this point all I can do is reiterate that I’m sorry and promise to do better in the future.

That hasn’t stopped tweets at GQ calling for him to be fired, though:

@RealJamesWoods @TheIvanVolter Just added #GQMagazine to the list of liberal rags I will never pick up. Fire #BethlehemShoals.

This isn’t the first case of violent rhetoric from media members during this election campaign; Curt Schilling said Hillary Clinton should be “buried under a jail somewhere,” and received no public punishment from ESPN for doing so (he was later fired after posting an anti-trans meme on Facebook). We’ll see if anything more comes from it.