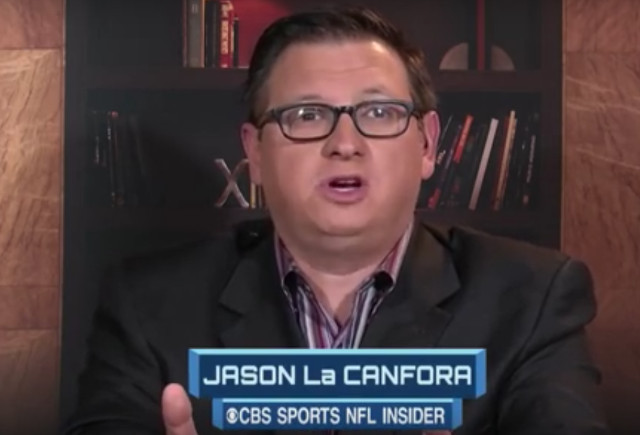 Taking others’ Twitter content without proper attribution or credit has led to tides of criticism against sports media figures, and the latest in the crosshairs is CBS NFL insider Jason La Canfora, who’s under fire from Denver Mile High Sports radio host Benjamin Allbright (who also does work for CBS Sports Radio). This all started Thursday when Allbright, who cohosts the morning “Sports Guy Mike” show on AM 1340 Mile High Sports, tweeted a screenshot of the less-than-stellar game leaders in that night’s NFL game. Less than two minutes later, La Canfora tweeted the identical graphic (complete with the same amount of battery, the same time, etc) and sourced it as “texted to me by an NFL personal exec.” Here are the tweets for comparison: 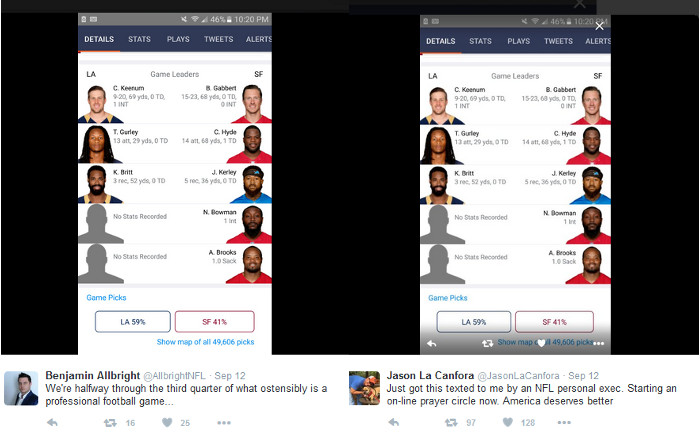 Allbright came across this on Sunday, asked La Canfora where he got the photo, didn’t get a response, then delivered a bunch of tweets calling La Canfora out for lying and saying he’d complained to CBS. Things escalated Monday, when La Canfora complained about a Tennessee paper not attributing a story he broke, and Allbright called him out again over his own lack of attribution. La Canfora, who has been publicly combative on Twitter before, responded with a “clown” shot:

Out curiousity what personnel exec lifted a screenshot from my phone & tweeted it to you? https://t.co/gWPhP47zVC https://t.co/1LVqo72x7r

Read this over 3 times. Zero attribution for who broke this story. They fire all the editors in Nashville? https://t.co/S83TycIUj0

The irony of you talking about attribution is staggering. https://t.co/ZxbCToLWR8

Ok so @JasonLaCanfora lied got caught and then blocked. Jason, I've got the proof. This is a terrible look for you.

@AllbrightNFL fess up to what you clown? I don't know who you are. I'll certainly credit you for being a pathetic crybaby

Allbright spoke to Awful Announcing Monday and said his issue isn’t about La Canfora taking the screenshot, but about what he views as La Canfora’s dishonesty.

“This isn’t the first time that I’ve caught La Canfora lying about something, it’s just the first time I have irrefutable proof of it,” he said. “I hate to mention this part because it seems self-aggrandizing, but I spent 15 years in the U.S. military, and part of the soldier’s creed is don’t lie, cheat, or steal, or tolerate anyone who does. Before getting into this industry, one of the things I thought about journalism as a whole and even sports journalism was that there was honesty to hold people’s feet to the fire. The longer I’m in this industry, the more I find out just how many scumbags are in it, people out to make a name for themselves who absolutely will lie about anything to get that. I don’t have respect for people like that.”

He said his delayed response was because he didn’t see La Canfora’s tweet at first, and his complaint’s not about the image itself, but about La Canfora not admitting how he got it.

“Honestly, I didn’t even notice this at the time it happened, I was trying to find an old Texans’ tweet to do something and came across it yesterday,” Allbright said. “As far as stealing the image, anyone could have taken that screenshot off the Yahoo Fantasy Sports app or whatever. The image itself is really inconsequential; I don’t care about that. But it’s very blatantly mine. The issue to me is that he flat-out lied about it, he lied and said that a NFL front office exec texted to him as well. There are 75 seconds between the time I tweeted the image and he tweeted that message. I can tell you for a fact, I reached out to the execs who follow me—some of them follow me under anonymous accounts, most of them. None of them sent any messages to Jason La Canfora that night with screenshots from my Twitter, so that’s number one. Number two, obviously there’s a 75-second difference in between there, nobody would have the time to take a screengrab, crop their screengrab out so it just showed my screengrab, and then turn around and text it to Jason, who would then file that into a tweet. You just don’t have time to do that in 75 seconds, and that’s assuming that guy saw it the instant I tweeted it and texted it that very instant as well. That’s just not plausible.”

Allbright said the real proof is in the metadata of La Canfora’s image, though.

“Any time a photograph is taken or a screengrab is taken, there’s metadata associated with that,” he said. “For a little background, my 15 years in the army were in the IT field, and I also worked, after I got out of that, helping out law enforcement track down child predators, so getting this kind of information for me is not a big thing. I don’t think Jason either understands or knows it exists. But he screengrabbed it from Twitter; on the metadata, the photo source is from Twitter.”

Allbright has lodged a complaint with La Canfora’s employers at CBS asking for a written apology, which he said he only did after attempts to contact La Canfora were unsuccessful. He said he’s pursuing this because he believes honesty is vital for journalists.

“Why is this important to me? Because this is a field that’s supposed to be honest,” he said. “I just can’t stand it when people lie. To me, it’s one of those things where if he’d admitted it, hey, whatever, I’d have gone on about my day.  ‘Hey, you know, guys, I was drinking, I made a little goof, this didn’t come from a NFL guy, it came from Allbright,’ I’d be done with it. Instead, he lied and said it came from a NFL personnel exec, and misspelled personnel as personal, and then continued to lie, and finally, when confronted today, his response was to call me a clown and block me before I had a chance to respond. I tried backchannelling and reaching out to him several different ways, because I work as a contractor for CBS Sports Radio, and I tried reaching out to him in several different directions, and all were ignored. So finally I said, ‘Okay, if that’s the way you want to play it, be an asshole about it then. You lied. This isn’t the first time you lied, Jason.’ That’s my problem. All I asked for is a public, written apology from Jason on his Twitter feed, an admission he was lying and a public apology for the unprofessional conduct.”

“I’m just flabbergasted,” he said. “I’ve only been in this industry for about four years, but it absolutely stuns me how dishonest people are.”

La Canfora did not respond to an Awful Announcing request for comment.