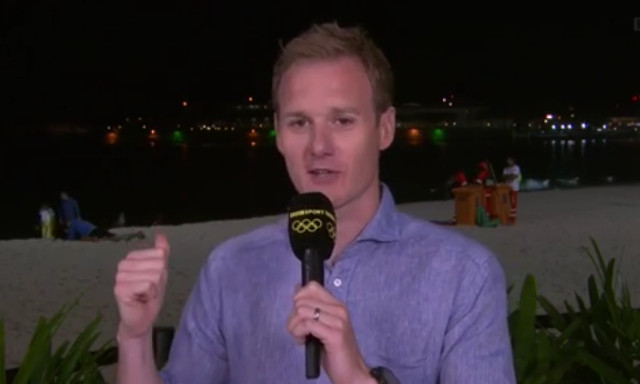 It’s been quite the Olympics for the BBC’s Dan Walker. Walker’s BBC4 late-night set on Copacabana Beach got crashed by a bachelorette party Sunday, and goings-on in the background of his set produced a social media stir Thursday, with it looking to much of the world like the couple in the background was having sex. Walker described it on the air (with a smile) as them “reading a book,” though:

"They're reading a book in a strange pose."#Rio2016 with @mrdanwalker on @bbcfour – anything can happen! https://t.co/sHmEl30frP

Walker then chimed in on Twitter with a superb hashtag:

Thanked readers for their unbroadcastable hashtags:

Thank you for all the hashtags you've been sending in for the 'book reading' on the beach. None of them are broadcastable

Just doing some light reading on the beach #Copacabanter

This has been quite the Olympics for Walker, with his desk seemingly attracting all the background scenery. The regularly-passing-by garbage men, which can be seen in the same shot above, have become a recurring feature of Walker’s coverage, too. He’s dubbed them the #Copacabinmen, which has taken off on Twitter. Via BuzzFeed’s Scotty Bryan, here’s a still of one of Walker’s segments on the bin men: 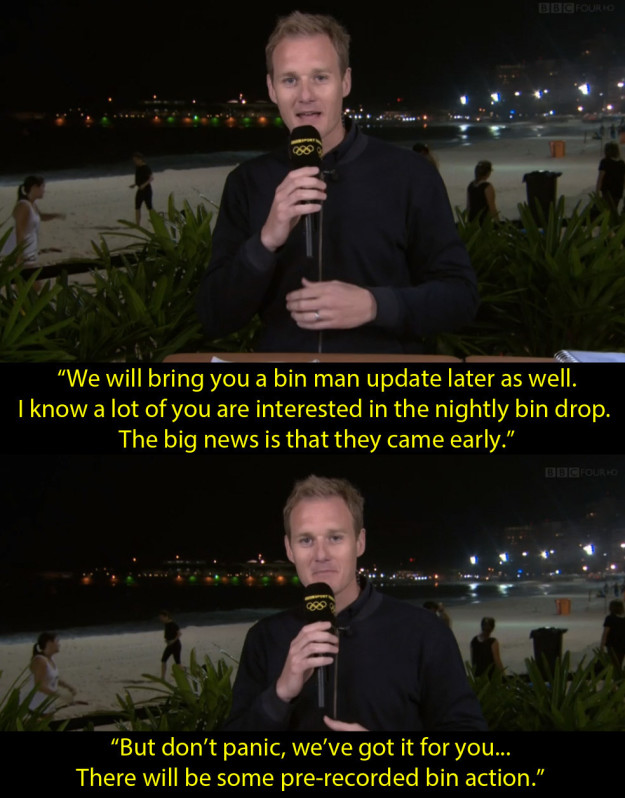 And Walker has turned into quite the Brazilian celebrity, especially thanks to his interview with the bachelorette party:

It's getting mad. I've been stopped in the street a few times in the last 24 hours. I thought it's because I look like this guy from… 1/4

…Globo TV who is a bit of a star out here. But last night a group were waiting outside the studio. I said 'hi' laughed and said… 2/4

… 'Lovely to see you but, why do you want a picture? 'They replied 'Dan. You're the Maria man. Everyone in Brazil is talking about… 3/4

…your show'. They then starting chanting 'BBC, BBC, BBC!'. Bonkers. I blame the wonderful @mariadecezar 4/4 pic.twitter.com/kpESj7zTuz

The bachelorette party was great, but “reading a book” is perhaps a broadcasting career highlight. What sort of book were they reading, the Kama Sutra? Some British sitcom needs to take this and run with it, adding it to the great and diverse lists of British euphemisms. Say no more.