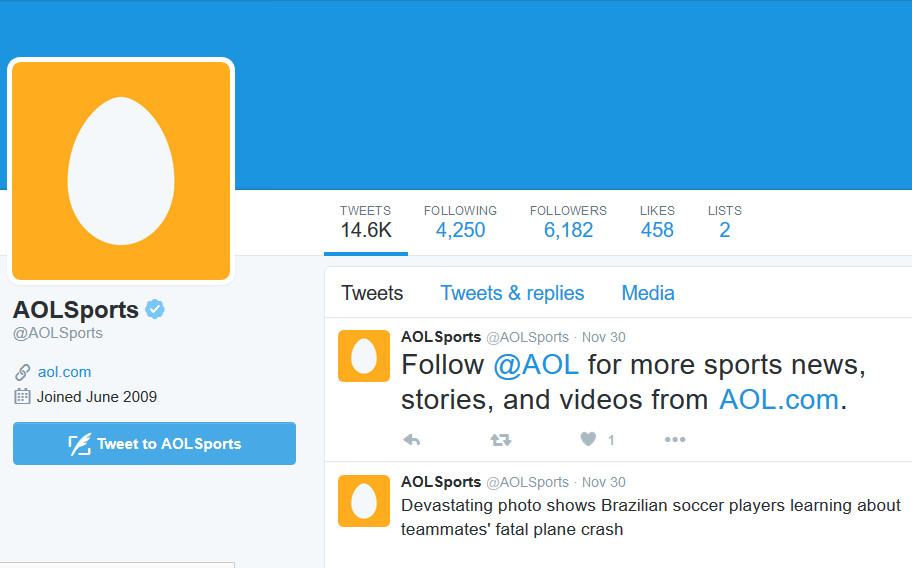 AOL has had plenty of changes in sports strategy over the years, from running the traditionally-focused AOL Sports and the newly-created FanHouse in parallel to integrating them to moving to columnists to selling off the FanHouse brand, domain and AOL-directed sports traffic to The Sporting News, to relaunching AOL Sports once that deal ended in 2015, striking a “multi-year video content partnership” with Fox that year, and talking about plans for extensive original short-form video later that year. Now, AOL Sports’ days as a separate division seem to have ended. Check out their (still-verified) egg Twitter account, which hasn’t tweeted since Nov. 30, when they sent a final “follow @AOL!” message:

Also, their Facebook page seems to be gone, and their AOL.com/sports page is now only posting links to sports stories on other AOL properties, and many of them old. They posted three links to stories Wednesday, but before that, their page shows just one story Tuesday, and the ironically-named “The Latest” section has a NFL game story from Sunday (but none from the slate of games Saturday), a story on the Vikings’ plane misadventure Saturday, and then nothing before last Thursday. Also, their head of sports programming left the company in December after almost three years with the company. We reached out to AOL for comment, and got the following response, attributed to Tim Matush, vice president of AOL.com:

In December, we integrated our standalone sports content into our broader news experience. We are still covering major sporting news and events, surfacing this content to an even greater portion of our audience as part of our news coverage.

Yes, AOL’s other properties are still covering sports, but it’s interesting to see them go away from standalone sports content and a sports Twitter account (with 6,182 followers) and to such a limited sports vertical. And “we integrated our standalone sports content” feels like a very Borg statement, except that there isn’t much distinctiveness being added to overall AOL.

What’s really interesting is how this comes just over a year and a half after an April 2015 AdWeek piece titled “Here’s AOL’s Playbook for Becoming a Sports Content Leader, but Is It a Winning Strategy?” featured AOL executives speaking highly of sports’ place in their overall operation. A big part of the discussion there was about the daily video show 2 Point Lead, which hasn’t tweeted since May (with 413 followers) and has its 2PointLead.com page now redirect to AOL video. Here’s what they said at the time:

2 Point Lead—which Pappas calls “the ultimate sports fan comedy show”—sits atop the batting order of AOL’s lineup of new, original sports series. The short-form videos, lasting between 30 seconds and three minutes, have a tendency to lob softball questions at their guests, but they’re targeting the biggest names in sports. And episodes range from irreverent interviews to satirical skits.

“It’s basically one—hopefully—funny viral clip every day,” AOL’s president of video and studios Dermot McCormack explains. “And because it’s every day, we think our odds of becoming part of the cultural conversation are really good.”

That’s ultimately AOL’s goal: to become a central part of the daily sports discussion, without trying to be ESPN or Fox Sports. And it’s working with an assortment of partners to develop that content, including Relativity Media and Derek Jeter’s The Players’ Tribune.

Twenty months later, it doesn’t seem there’s been much building, and AOL certainly hasn’t become “a central part of the daily sports discussion.” Oh, and McCormack? He left the company in December 2015. So, in the end, that turned out to be one more changing strategy from AOL Sports, and one that has now changed again. The new change is that there is no more AOL Sports (at least, not as a separate entity); we’ll see if that change sticks, or if they decide to bring it on back again in yet another form.

While sports can be a tough area to crack, it’s notable that AOL still has a significant front-page firehose of traffic they can direct to whatever they want, giving them a big edge over many competitors. Maybe they’ll find that their other properties are covering enough sports that they’re not losing much by not having a separate sports unit, but from the outside, it certainly seems curious that a company that still has AOL’s size isn’t putting more resources into sports. (Of course, it probably should be noted that AOL and Yahoo are both now owned by Verizon, and sports is a big part of Yahoo, so the overall company’s investing in sports. That doesn’t necessarily mean you’re going to see a ton of Yahoo content on AOL’s sports page, though.)

It’s also notable that AOL has essentially abandoned their sports social media platforms. Their platforms didn’t have huge scale compared to others in the space, but why not assign someone or set up a feed just to tweet out the links that are showing up on AOL.com/sports?

This is just the latest change in direction for AOL on the sports front, but it’s an unusual one, and one that shows how much things have changed. Ten years ago with the launch of FanHouse, AOL was one of the top sports sites on the internet, and certainly leading the way in the blogging space. Today, they don’t have a separate sports division. Life comes at you fast.