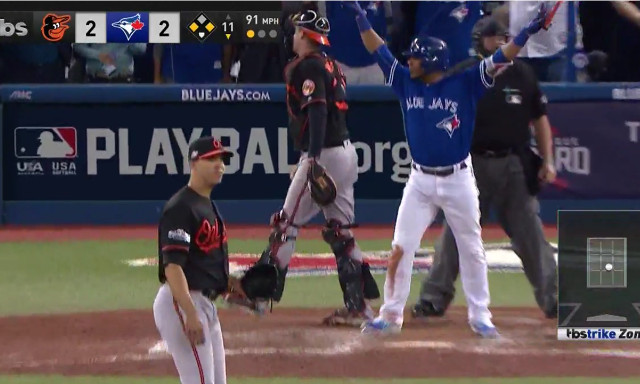 Any analysis of Canadian versus American TV ratings needs to account for the population difference in the two countries; the U.S. population’s currently estimated at 324,748,713, while the Canadian population is estimated at 36,379,574, 11.2 per cent of the American population. Thus, even events where Canadian ratings set records and American ratings nosedive like this year’s Olympics typically still have much higher raw numbers in the U.S. (about 20.7 million to about 2.3 million main-channel primetime viewers on average). That’s not the case for Tuesday’s MLB extra-innings American League wild-card game between the Toronto Blue Jays and the Baltimore Orioles, though, which pulled in almost as many average viewers in Canada as it did in America.

In the U.S., TV By The Numbers has that game’s average viewers on TBS as 4,195,000, which won the night on cable in the 18-49 demographic among single broadcasts (if you combine all the various vice-presidential debate broadcasts, they’d add up to more). In Canada, Rogers Sportsnet announced that their broadcast pulled in an average audience of 4.02 million. It’s remarkable to see those numbers so close together, and that has a lot to do with this being a very high number by Canadian standards and a very low one by U.S. standards. According to Sports Media Watch, this game wound up being not just a plummet from last year in terms of wild-card ratings, but one of the lowest-watched wild card games of all time in the U.S.:

The 3.3 overnight is tied as lowest yet for an MLB Wild Card Game (10 telecasts dating back to 2012). The first ever Wild Card Game, Cardinals/Braves in 2012, had the same overnight in a late afternoon timeslot.

That has a lot to do with both competition from the vice-presidential debate (which drew a combined 24.2 overnight rating, according to Fox Sports executive Michael Mulvihill) and Toronto/other Canadian viewers not being measured by Nielsen. Meanwhile, the broadcast was Rogers Sportsnet’s most-watched event of 2016, and their fifth-most-watched broadcast ever:

Overall, more than 9 million Canadians watched some part of last night’s broadcast. Audience levels peaked at 5.38 million at 10:54 p.m. ET in the bottom of the ninth inning with none out, two runners on base and Jose Bautista at the plate.

Given that those other ratings are all from the Jays’ playoff run last year, it seems likely that this trend of good ratings will continue for Sportsnet. Whether they’ll get close to the U.S. ratings again is more debatable, especially if there isn’t another major event drawing so many viewers away, but Tuesday night did give us one highly unusual situation where Canadian ratings weren’t far from U.S. ones. Considering the population discrepancy, that’s pretty remarkable.