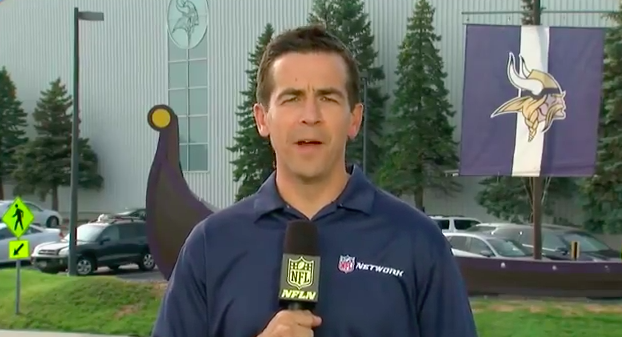 On Tuesday, AA’s Alex Putterman outlined how Fox’s Colin Cowherd started talk of Jim Harbaugh to the Rams Friday by saying “By the way, Albert Breer on the way out said the Jim-Harbaugh-to-the-Rams rumor is a very real thing.” Breer, a reporter for Sports Illustrated’s The MMQB, later said on Twitter that he didn’t say Harbaugh would leave, but that there would be interest in him. Even Cowherd walked his own statement back a bit Tuesday night by saying Breer only told him “the Rams would likely have interest in Jim Harbaugh,” but the rumor had already spread like wildfire by thats point.

On Wednesday, Breer joined The Dan Patrick Show for a wide-ranging interview. However, the most interesting segment was what he had to say about the Harbaugh-Rams rumor (which has led to Harbaugh having the third-best odds on that job at Bovada):

Patrick starts by asking “You’re walking away, you’re not even on the air, when Cowherd is quoting you, is saying ‘Hey, Breer just said that Harbaugh to LA rumor is real.’ You didn’t say that?”

“Right. I didn’t say that, no,” Breer responds. “You know, those things can get lost in translation sometimes, but I never said that. At that point, Jeff Fisher hadn’t even been fired. Basically, what I intimated was just ‘I think this is the first guy that they’d call.’ It’s the first logical name that would come up. Look, I think Harbaugh’s eventually going to be back in the NFL. I never thought it was going to be this soon, but his name’s going to come up every year. Like for a lot of years, Nick Saban’s name came up every year. So I never meant it as anything more than that, but it got turned into something else.”

Breer continues, “It’s funny because I wasn’t even aware of it until Sunday morning, and I’m getting ready for the Sunday games to do my job and everything else, and my buddy Rich Eisen texts me ‘Did you say this?’ And my answer was ‘No, I didn’t say that.’ So that’s what prompted me to jump on Twitter Sunday morning and say ‘I never said anything like that.’ Again, by then, I don’t think a lot of people wanted to hear the truth, which was that I never said that Harbaugh was going anywhere.”

Patrick then says “I think we want the story to be true, Albert, and that’s what played into this, whether you said it or not. It’s like Colin Kaepernick, when he first came out with his protest, people forgot what he’d said there; they’d already established what their opinions were down the road. Here’s Harbaugh, I’d speculate Harbaugh would be high on my wishlist. So would Jon Gruden. There are a couple of guys there. Hey, Pete Carroll, come on down! That doesn’t mean there’s anything factual attached to it, yours was just analyzing it and maybe speculation of what can happen in the near future. Now people attach the ‘You went to Ohio State, this is Michigan, they’re supposed to have this incredible recruiting haul, you’re trying to create something to hurt recruiting, to hurt Michigan.'”

If Breer’s account here is accurate, that’s further proof that Cowherd’s handling of this was highly problematic. For one thing, a sensitive topic like this probably should have been discussed on-air, not off-air with Cowherd summarizing the results, as that led to Cowherd saying Breer’s reporting something that he wasn’t claiming to. Saying “the Jim-Harbaugh-to-the-Rams rumor is a very real thing” is not an accurate summation of what Breer claims he said, which is just that he thinks (and isn’t reporting) that the Rams would call Harbaugh. (According to Benjamin Allbright, the Rams aren’t actually interested in Harbaugh.) That also speaks to some of the issues with people asked to be both analysts and reporters; it’s on them to be clear when they’re analyzing what’s logical from the outside and when they have reported knowledge of what the people on the inside are actually doing. There’s value to both roles, but the information generated by the two is very different, and should be accurately labeled.

Beyond that, this speaks to the silliness of a lot of the coaching reporting cycle. Those situations are often very fluid, and they have a whole lot of people trying to be first to predict or break things, which generates plenty of erroneous information. Many also seize on the tiniest thread of information (in this case, Breer saying he thinks the Rams might call Harbaugh) and sew a whole sweater out of it. Patrick makes the valid point too that college sports stories in particular, rightly or wrongly, are often judged by where the reporter went to school (and relatedly, there is actual incentive for rivals to play up negative stories about a school to try and impact recruiting; a good reporter certainly wouldn’t do that, and there’s no indication that Breer did, but some of the opposing message boards and other sites that did wind up cranking up this rumor could have an actual interest in spreading it).

Iin this case, though, most of this ridiculousness could easily have been avoided. If Cowherd had gotten Breer to clarify on the air, if he had summarized Breer’s off-air comments more accurately, or if he had just chosen not to repeat those remarks on air at all, we wouldn’t have wound up with this controversy. Cowherd managed to fuel the news cycle and get himself some attention in the process, but if Breer’s account is accurate, he certainly doesn’t look good for doing so.

The Dan Patrick Show airs from 9 a.m. to noon Eastern Monday through Friday on Audience, NBCSN and radio affiliates.