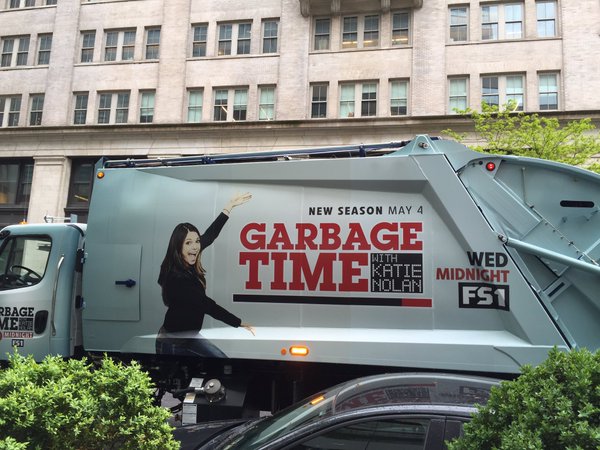 At this point there are few places you’re surprised to see advertising. Walk around a city long enough and you’ll see ads on buildings, walls, cars, the ground. And yet FS1 has found a new frontier of marketing as the network promotes Katie Nolan’s hit show: garbage trucks.

It was actually star U.S. soccer player Carli Lloyd who brought this new promotional strategy to the world’s attention:

@katienolan thanks for having me on your show. My goal is to have my photo on a garbage truck. You are big time! pic.twitter.com/HT1vAPU1Dq

Her show is called Garbage Time, that’s a garbage truck, so yeah, you get it.

You could maybe make a case that it’s out of line to advertise on garbage trucks because you’re associating the show with trash, but you could more easily make the case that this is an innocent play on the program’s title and not worth fretting over.

Nolan’s profile continues to rise, less than three years since she first appeared on FS1 and just over a year since Garbage Time debuted. In a profile published in The Guardian this week, Nolan talked about quick everything has happened and how simultaneously taken aback and motivated she is by her success.

“I never thought I could be in sports and give my opinion,” she said. “When they say, ‘Thanks for people like you,’ I think, ‘What do you mean ME?’ That’s why I go to work. That’s where some of my courage comes in. Someone has to say something, so women who want to do this after me won’t have to fight this battle. Let me put my footprints in the snow.”

Nolan remains a unique and interesting thinker amid a network of derivative and vapid screamers, so it’s nice to see FS1 investing in promoting her, even if it’s on garbage trucks.

Maybe the most important quote in the Guardian piece came from Fox Sports executive Jamie Horowitz, who is mostly known as a Baylessian enabler but also seems quite fond of Nolan.

“Katie Nolan is everything I want Fox Sports 1’s programming to be. Period, end of statement,” said Jamie Horowitz, president of Fox Sports National Network. “The thing with Katie is she’s incisive and insightful and she challenges the way viewers think. Katie Nolan is not an interesting woman. She’s just interesting. That’s the magic of it.”

Maybe if Nolan keeps climbing the ranks she can get herself on a dump truck next.