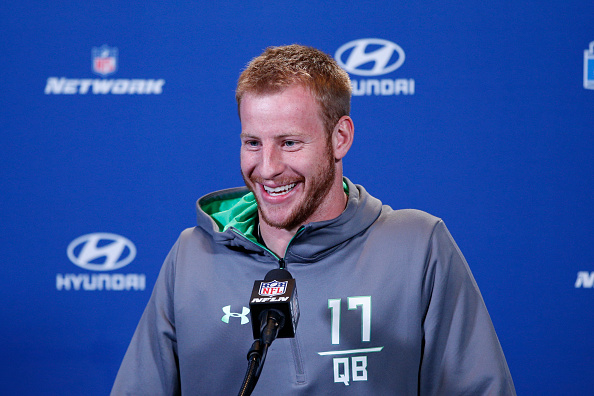 The Los Angeles Rams made a big splash just a couple weeks away from the NFL Draft by making a huge trade with the Tennessee Titans to acquire the #1 overall pick.

Let’s break down that trade: pic.twitter.com/RU4luOUQDc

It’s no mystery that the Rams are in need of a franchise quarterback, with Case Keenum the current frontrunner to lead the franchise onto the field in their Los Angeles rebirth.  The only question at this point is whether the Rams made that trade to take California’s Jared Goff or North Dakota State’s Carson Wentz.

If you listen to NFL insiders in the media it’s Goff.  No, it’s Wentz.  No, definitely Goff.  Wait, maybe it’s Wentz.  Maybe nobody knows.  Here’s the timeline of the reporting into the Rams’ thinking…

9:24 AM – Just twenty minutes after the Titans announced the trade, CBS’s Jason La Canfora says the Rams “are very high” on Wentz.

Browns will be happy because their guy has been Goff. Rams are very high on Wentz

9:59 AM – Sam Farmer of the LA Times says the Rams are “leaning” towards Wentz.

To reiterate — Rams are leaning toward Carson Wentz but Jared Goff still heavily in the mix. Will turn over every stone. Definitely a QB.

10:08 AM – Not so fast my friend, Matt Miller of Bleacher Report says the Rams are targeting Goff:

Multiple sources expect Jared Goff to be the #1 overall pick in the draft.https://t.co/YdIBIyIEcb

10:09 AM – SI’s Peter King throws cold water on all of those reports by saying that the Rams have still not decided.

Just filed a story on the trade @theMMQB. Will link when it’s live.
Rams have not decided with certainty who they will pick at number one.

Rams lean Jared Goff today, but one reason they made trade now was to get two weeks to debate top 2 QBs because "both are going to be good."

Rams not disclosing 1: Snead: "It's good for the networks." Fisher "You guys would have nothing do for the next 2 weeks if we told you now."

Well, if we’ve learned anything in the past 12-24 months about NFL reporting it’s that you can’t believe everything you read.  (See: Gate, Deflate.)  A healthy skepticism is warranted, especially when you see such wildly varying things being said in public.

In spite of what the Rams are saying publicly, it’s difficult to fathom that an NFL franchise would mortgage a good chunk of their future to trade up to #1 overall in the draft and still not know who that person is that they are trading for.  If that is the case and the Rams are still trying to decide after making the trade, it’s a crazy roll of the dice.  What are they going to do if they can’t decide – come on stage at the draft and have Magic Johnson flip a coin for them?

But for the sake of argument, let’s just assume that is the case.  Could it be that the people who want Goff in the Rams organization are the sources for the Goff reports and the ones “leaning” Wentz are getting out publicly likewise?  Perhaps it’s that simple.

In that case, headlines like “Rams leaning toward picking Jared Goff; Carson Wentz also an option” is a classic hedging of bets that ultimately can’t be proven right or wrong.  Technically, every player entered into the draft is still an “option” at this point!

That’s why there are so many qualifiers being used with the Rams “leaning” or “targeting” one quarterback with the other still “in the mix.”  I could report that the Rams are “leaning” towards taking Christian Hackenberg, but they’re also “carefully studying” Connor Cook and “seriously looking into” Braxton Miller moving back to quarterback and it might carry the same weight.  Ultimately, all these reports about leans and targets are no guarantee or predictor of what’s going to happen.  But what it does do is feed into the hysteria surrounding the draft.  And in truth, all of the mystery only serves to help the NFL and the ratings for the draft if you want to know how the entire system works together.

This is the current state of insider reporting and the truth that NFL fans desire to know every single piece of information that exists, whether it may actually be something concrete or not.  This isn’t the journalistic reporting that you might think of in the classic sense, where events or happenings are the centerpiece of what is published.  This is insiderdom, where it’s not so much about events or happenings but about speculation, intrigue, and what someone might be thinking at a particular point in time.