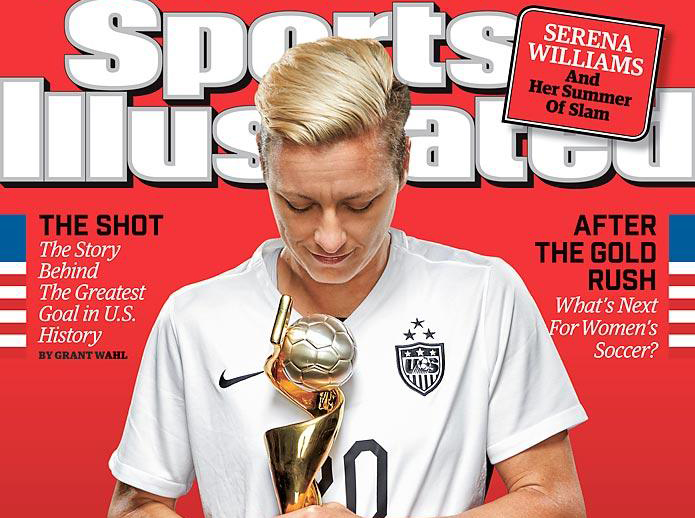 It’s no surprise that Abby Wambach is turning to television, but it’s notable that she’s doing it in a role that will go beyond soccer. Wambach, a 2015 Women’s World Cup champion with the U.S., a two-time Olympic gold medalist (2004 and 2012), and the all-time leader in career international soccer goals (she has 184; Canada’s Christine Sinclair is second with 162, while Iran’s Ali Daei leads the men’s side with 109) has also long been outspoken and quotable, so she seems like a natural fit for soccer analysis, and she’ll do plenty of that in her new role with ESPN. However, as the network’s release about her hiring states, she’s going to be involved on several other fronts as well:

Abby Wambach, 2015 FIFA Women’s World Cup champion and two-time Olympic gold medalist, has agreed to a multiyear contract to serve as an analyst and contributor to ESPN across various shows and platforms. Wambach will cover international sporting events for the network later this summer at the UEFA European Football Championship 2016 in France and 2016 Summer Olympics in Rio de Janeiro, offering her insight of the events and storylines from her unique perspective as an elite athlete.

Additionally, she will contribute to ESPN Films projects and feature reports, as well as ESPN’s award-winning news programs E:60 and Outside the Lines where she will expand her profile reporting on topical issues in sports. Later this month, Wambach will launch a bi-weekly ESPN Audio podcast, Fearless Conversation with Abby Wambach. The podcast will be topic-driven, featuring interviews with notable personalities.

“My soccer career has provided me with a lot of different experiences that brings more than Xs and Os to the table,” said Wambach. “I’m excited to join ESPN and to have the opportunity to tell stories that transcend soccer.”

“Abby is an original talent who can speak to a variety of topics,” said Andy Tennant, executive producer, E:60 and Outside The Lines. “She will be an engaging voice that will be valuable across multiple ESPN platforms.”

Wambach told Anne Peterson of The Associated Press that the ability to do more than just cover soccer was a key part of why she signed on with ESPN, and that she won’t shy away from controversial topics:

“Talking and reporting on things that I’m passionate about really, really was the selling point to me,” Wambach told The Associated Press. “Because I don’t want the rest of my life to be based on the fact that I played soccer. I want to be able to venture and learn about different things.”

Wambach also will produce a podcast, “Fearless Conversation with Abby Wambach,” which she promises won’t shy away from controversy. Among her first topics will be foreign players on the U.S. national team. Wambach drew criticism when she blasted U.S. men’s coach Jurgen Klinsmann for bringing in “a bunch of these foreign guys” in December.

“I know we’re not quite equal. From ‘your group of people’ the country’s Commander in Chief need to be selected. However, other than that — you and I share something not unique, but constitutionally earned, a birthright to defend this nation as an American. Wherever we go. Led by whoever has earned, by democratic process, his/her right to lead, on or off the field, in peace, in war, in practice, or in any other kind of pursuit of your happiness,” he wrote.

“Why not? I think people tend to steer away from stuff that has caused controversy in their lives. For me, what better place to start? To be quite honest, it’s been few and far between in my career, the reason being that I’ve been speaking for 23 other women, so I kind of toed the party line during that time.”

It’s going to be interesting to see how Wambach does at ESPN, especially when it comes to non-soccer subjects. She’s addressed plenty of off-the-field issues before, speaking passionately about LGBT rights and her marriage to fellow retired player Sarah Huffman, about the pay gap between men’s and women’s international players, and about playing surfaces, so she certainly has plenty of opinions (as the Klinsmann-Diskerud case shows). We’ll see how well she’s able to translate that to a role at ESPN. It is also notable that she is facing a DUI charge, where she’s pled not guilty. ESPN’s obviously well aware of that, and that didn’t stop them from hiring her, but those kinds of charges have led to dismissals for analysts in the past. Wambach does seem to have a lot of potential as at least a soccer analyst and perhaps much more, though, so it’s understandable why ESPN would take a chance on her. We’ll see how it works out for them.