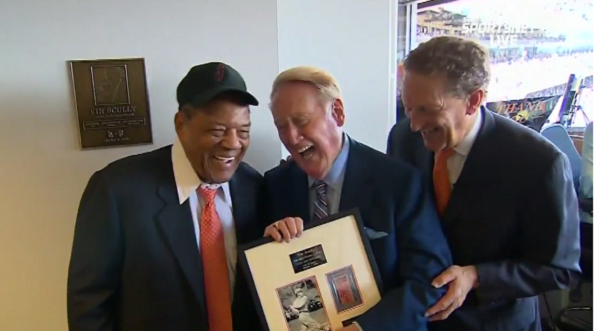 This article is sponsored by Clippit. Clippit is an awesome app that allows us to quickly grab 30-second clips from a handful of live TV broadcasts and share them on social media.

It was the final day of broadcasting for the legendary Los Angeles Dodgers announcer Vin Scully on Sunday, and he was treated very well by the fans in San Francisco, as well as announcers and television networks broadcasting other sporting events.

The 88-year-old’s final call was involved the Giants clinching a NL Wild Card berth, and Fox even cut into their 49ers-Cowboys broadcast to show it:

They also showed Vin with another legend, Willie Mays:

Even on NBC’s Steelers-Chiefs Sunday Night Football broadcast, Al Michaels talked about it being Vin’s final day, and they showed Vin’s call of the “The Catch” in the 1981 NFC Championship Game:

Fox had also shown that play on the 49ers-Cowboys broadcast, and showed off this awesome photo of Vin with John Madden in 1981:

Fans in attendance at the Dodgers-Giants game (again, in San Francisco) even had “Thank you Vin” signs, and Giants broadcasters Jon Miller, Duane Kuiper, and Mike Krukow showed their support as everyone sang “Take Me out to the Ballgame:

After the game ended, the Giants’ broadcast showed the team celebrating their playoff-clinching victory on the field, as well as Vin hugging his wife in the booth, saying, “The afternoon belonged to him (Vin) and those guys (the Giants)”:

The Tennessee-Georgia finish was absolutely insane, as the teams exchanged deep touchdown passes in the final seconds. The game of course (I assume you know what happened by now, anyway) ended with the Vols catching a Hail Mary pass in the end zone to pull of an amazing win, and these plays are always much more enjoyable to watch with the hometown radio call. Listen to Tennessee radio announcer Bob Kesling call the final play:

Last week we had a post about the Sloppy Body and how he could make a return to ESPN’s College Gameday for the Clemson-Louisville game on Saturday. He indeed returned, shirtless with a bow tie, but he didn’t seem as sloppy as his past appearances (and you’re probably fine with that):