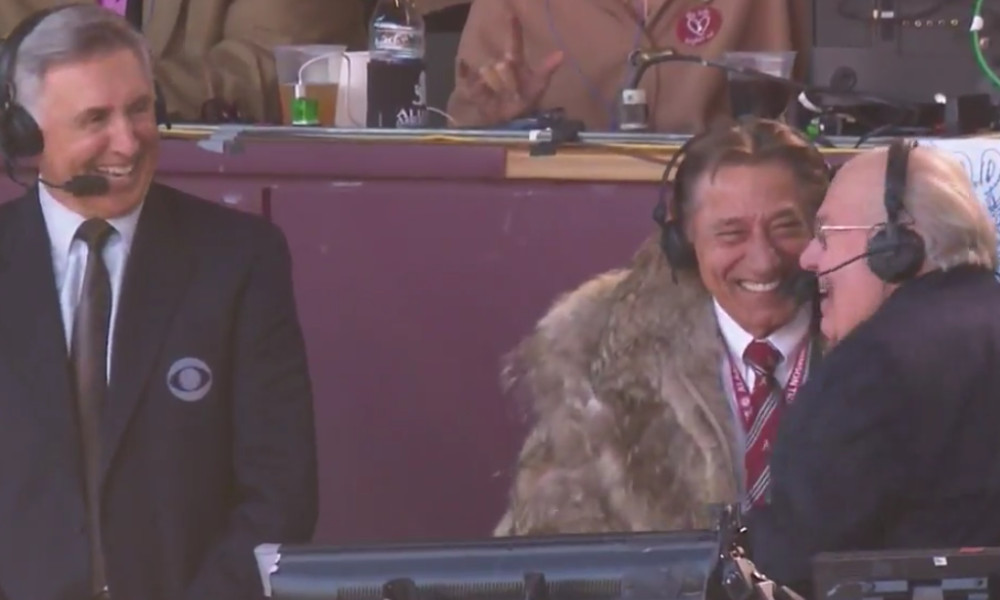 Verne Lundquist called his final Iron Bowl, and even got a kiss from Joe Namath

Saturday was the final Iron Bowl (Alabama-Auburn) that CBS announcer Verne Lundquist will call, and he got a special visit in the booth from an old friend: Joe Namath. And, Lundquist even got a kiss from Namath (something that probably reminds you of an incident from 13 years ago):

We also got a look at Lundquist with his look-alike, Alabama radio broadcaster Eli Gold:

Rece Davis drops a “Champions of Life” reference for Tennessee

From Andrew Bucholtz’s article on the topic:

The Tennessee Volunteers were eliminated from contention for the SEC’s East Division title and a berth in the conference championship game Saturday when Florida beat LSU, but head coach Butch Jones said his seniors “won the biggest championship – that’s the championship of life.”

ESPN’s Laura Rutledge went all-out to get an interview with the LSU AD, only to get a “no comment”

ESPN’s Laura Rutledge deserves an Emmy for this effort during the LSU-Texas A&M game, which ultimately resulted in a “no comment” from LSU Athletic Director Joe Allevia on the Tom Herman rumors. She basically gave the report from outer space:

As for Tom Herman, he rejected the LSU job in favor of the Texas one, and LSU gave Ed Orgeron the permanent gig.

Danny Kanell brought the turtleneck back on ESPN