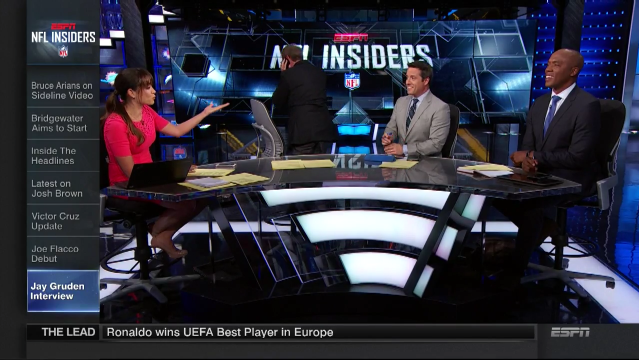 This article is sponsored by Clippit. Clippit is an awesome app that allows us to quickly grab 30-second clips from a handful of live TV broadcasts and share them on social media.

“I am not, as Ryan Lochte would say, ‘overexaggerating'”:

Yes, Matt Moore would lose his no-hitter after a Corey Seager bloop single with two outs in the ninth, but that doesn’t take away from how terrific this Denard Span catch was to keep the no-hitter alive. And the play featured a great call as usual by CSN Bay Area’s Duane Kuiper (Kuiper and Mike Krukow make for our second-best MLB announcing crew):

NBC’s longtime NFL color commentator Cris Collinsworth recently became the owner of Pro Football Focus, a terrific online source of NFL data. Well, during the Falcons-Dolphins preseason game on Thursday night, NBC showed some data from PFF, and Cris Collinsworth said how “Pro Football Focus will tell ya (that Ryan Schraeder is the best right tackle in the NFL)…” without any mention that he owns the company. How to subtly promote your product, folks:

Okay, so this is two videos, meaning there will be six videos instead of five in the post. I lied!

But, I put these two in here together because they’re both about former ESPN MNF play-by-play man Mike Tirico joining NBC. In the first video, Tirico talks during the Rio closing ceremony about how his first Olympics experience went, and in the second video, he talks with Cris Collinsworth during that Falcons-Dolphins game about joining NBC (although, there are probably some not-so-pleasant things he would like to say about it):

Ed Werder has had enough of ‘NFL Insiders’!

Last but certainly not least, this gem found by our friend @cjzero, in which ESPN’s Ed Werder is on the phone and walks off the NFL Insiders set during the live show: