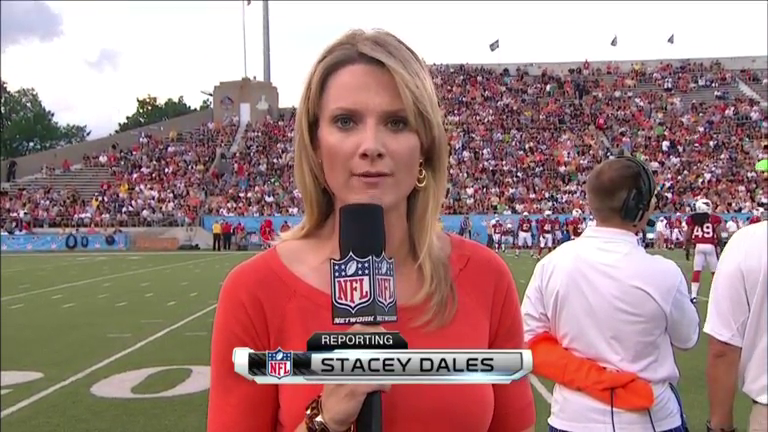 Stacey Dales, who just signed a new multi-year deal to continue as a sideline reporter for the NFL Network and is also working games for CBS (including Sunday’s Giants-Rams game in London), has had quite the journey through the sports world. She grew up in Brockville, Ontario, where she shone in basketball, winning three provincial championships, then went to the University of Oklahoma, where she was named the Big 12 player of the year in 2001 and 2002. She played for Canada in the 2000 Sydney Olympics, played in the WNBA for Washington and Chicago, and was inducted into Brockville’s Sports Hall of Fame this year (alongside her brother Burke, a successful CIS punter who had a brief NFL stint with Pittsburgh and spent nine years in the CFL with Calgary, Edmonton and Montreal).

Dales has had a long media career, too, serving as a NCAA women’s basketball analyst for CBS Westwood One radio, the Sooner Sports Network and CBS’ NCAA women’s basketball championship special from 2003-2009, spending seven years as a analyst, reporter and columnist for ESPN and ABC (covering men’s and women’s college basketball, the NBA and college football) and then joining NFL Network in the fall of 2009 as a host and reporter. On the occasion of her new deal, Dales (whose agency of record is Playbook, Inc.) spoke to Awful Announcing this weekend about sticking with NFL Network, how working for both them and CBS plays out, what her athletic background has taught her about journalism, and much more. Here’s our conversation, edited for clarity.

Awful Announcing: Why did you decide to stay with NFL Network?

Stacey Dales: NFL Network is my family through and through. This is my eighth year with the network and there’s a loyalty, a devotion, a reciprocity that’s been fantastic. And I’m honored to work for the NFL, truly. I don’t think there’s any greater global entity than the NFL, and it’s really a family. When you get into the league, when you get to work with some of the people that I’ve worked with, you’re surrounded by extraordinary individuals. As a former—many, many years ago—as a former athlete, I’ve always been very competitive and I’ve always wanted to surround myself with extraordinary unique people, whether they’re in a spotlight or they’re not. You’re sort of touched by greatness in many different dimensions. So it’s helped me expand my knowledge and my journalistic approach. The opportunity not only with NFL Network but with CBS, CBS has been such a wonderful partner with us, and I’m actually headed to London next week to do a game for CBS, I have a few on the ledger this year, and you talk about pros. So to get to be surrounded by the NFL Network and to get to be surrounded by CBS at this stage in my career all these years later, is, honestly, it’s humbling.

AA: About that CBS deal, what’s that like, getting to work for two different networks at once?

SD: Well, credit to both networks. Credit to NFL Network for allowing me the opportunity to to work with CBS and then to CBS for saying ‘Hey, jump on board and let’s work together.’ It’s been great. Obviously the Thursday Night Football platform has created great symmetry between the two networks. And having had the opportunity to surround myself again in a literal sense with some of the folks at CBS, you naturally develop relationships and they blossom, and I’m honored to work for CBS. It’s just class of the class. Basically how it works for me…I’ve just signed another multi-year deal with NFL Network, and NFL Network graciously says ‘You know, CBS, they’re good friends of ours, and if they want to utilize your journalistic integrity and reporting, go for it.’ So that’s kind of how it works. I do a few games for them and get to be a part of their team day cruise which is always different and exciting, and again I feel like I’m always expanding. I don’t think you can ever get complacent. There’s always been sort of a competitive nature to me to individually get better, even though I was really always involved in team sports and I’m part of a team in both respects with the NFL Network and with CBS. I get to continue growing. The NFL’s been so awesome: I’ve covered a lot of different sports in my broadcast career, and I’ve got to tell you, there’s never a shortage of storylines that motivate me. There’s never a shortage of storylines and there’s never a dull moment. There’s always somewhere to broaden. And that really excites me.

AA: You mentioned your your background as a competitive athlete. Playing basketball at such a high level, how has that affected your approach to journalism?

SD: It’s had a tremendous effect because it enabled me to have empathy and appreciate what athletes and coaches and franchises and clubs, teams, whatever you want to call them, go through and do. It help me to understand what it’s like when the chips are down and what it’s like when something is really excelling.  And I can take that empathy and apply it to what I do journalistically. I think it gives me a really unique perspective, to be honest, in dealing with players, coaches, in particular PR staff, having been on the other side of it and making myself accessible for instance to the media. As a former athlete, there’s this unique relationship you develop with these players and coaches and these teams and and then just understanding, really having a strong appreciation for the development of respect and trust. That’s something I grew up with, my parents instilled integrity. The integrity part of what I do is the most important part to me, maintaining relationships with trust, respect, and that integrity, because when you have that, you can do your job at a high level. And I think being a former athlete—though many people so many years later wouldn’t know I was perhaps–it’s gratifying for me to get to carry that in my job on a weekly basis in this league.

AA: Growing up in Canada, was the NFL really on your radar at all? Or was it something you came to later in life?

SD: I and my brother grew up in hockey rinks. But his nose for the penalty box pushed him into football. My dad is an avid Buffalo Bills fan and football lover. And so ironically, as a Canadian, Andrew, you know that hockey is religion to us. Ironically football was probably more pronounced in our household at a certain point. I mean, there wasn’t a Sunday we didn’t have the NFL dominating our household, and the CFL, my brother played nine years in the CFL. So I think there was sort of 24 hour football in our family, but really sports in general. I mean, we grew up in a small town and just loved sports. So all these years later it’s really cool to get to walk in to stadiums and experience it.

AA: Do you ever chat with your brother Burke about pro football, what his experience was like compared to yours?

SD: Well, obviously he was a player, he went about it a different way in a different city, but really now all he wants is the fantasy football advice. I’m not a big fantasy football player, but I’m happy to help him if I can, based on being surrounded by it all the time.

AA: What are you looking forward to in the next couple of years with NFL Network?

SD: Oh, there’s so much more ahead. The kind of person that I am is to continue to grow. The bar was raised; as an athlete, you sort of learn to push yourself. And I truly have separated myself from being an athlete, but those inherent characteristics have never evaded or left me. So now I look to continue to grow. I look for new ways to tell stories, to look to continue to improve and explore what other opportunities might be out there at a certain point. But my focus really right now is to be a great storyteller. It’s one thing to go in knowing facts and nuggets; that’s inevitable, you have to. But it’s another thing to be able to use your personality to connect with an audience and create moments and create memorable moments and tell the stories of the individuals that I uniquely get to cover.

The competitive part is just in me. It’s driving content and storylines, and we have so many different platforms now, whether it’s digitally or literally on television, social media, and allowing access for those out there watching. It’s fascinating to get to sit in a production meeting and talk to players in the NFL people don’t get to talk to, and relay those stories to our fans. And as you know, NFL fans are incredible. So I just want to continue to challenge myself and put in my passion, and my passion journalistically is telling stories and bringing those to life for people. It’s a lot of fun to get to do that.

SD: My biggest thing is just how grateful I am. My gratitude never stops. The NFL Network has been phenomenal. It’s such a family even through all the changes, we’ve gone through a tremendous amount of change over the years. To be back for another contract and telling stories and representing us and CBS is gratifying.